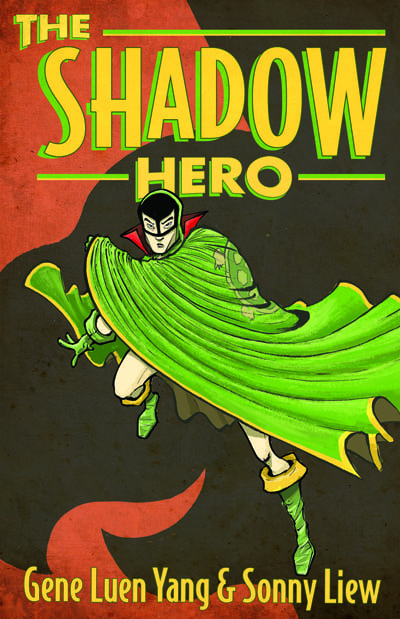 We’re all familiar with the faces—masked or not—of Superman, Batman, Spiderman, and Wonder Woman. But how many of us know that the crime fighter who was arguably the first Asian American comic hero never showed his face?

And that the Chinese American cartoonist who invented him intended it that way? Perhaps as an act of resistance?

Before a standing-room-only crowd at Eastwind Books in Berkeley recently, award-winning graphic novelist Gene Luen Yang talked about his most recent graphic novel The Shadow Hero.

He explained that in the early 1940s, during the heyday of comic book superheroes, Chinese American cartoonist Chu Hing was asked by a publisher to create a new super hero. Hing apparently wanted his caped crusader, the Green Turtle, to be Chinese American, explained Yang. But comic book lore has it that Hing was not permitted to do so. The comic book hero, legend goes, had to be a white male.

So Hing retaliated, Yang speculates, by doing “what we do: we react passive aggressive.” Chu Hing “draws these original comics so you never see the character’s (Asian) face. All you see is the cape” or, when the hero turns around, an arm, furniture or some other object that obscures his face and race. This odd subterfuge persisted for five issues before Green Turtle was discontinued. (All five stories can be read at digitalcomicmuseum.com).

More than 70 years later, intrigued by the narrative possibilities,Yang, who has been honored twice as a National Book Award finalist for his graphic novels American Born Chinese (2006) and the two-volume Boxers & Saints (2013), noted that Chu Hing never tells us the origin or identity of the character.

“So I saw an opportunity there,” Yang said. “The Shadow Hero is an origin story. We firmly establish him as the first Asian American superhero.”

Enter the Turtle. Wearing jade green, the color of immortality, and bearing a tortoise symbol on his cape, an emblem of longevity, Yang and artist Sonny Liew humorously and engagingly imagine the Green Turtle’s beginnings. In real life, the hero is a mild-mannered teenager named Hank, who only wants to run his immigrant father’s grocery store in a San Francisco-like city set in the 1930s.

His tiger mom wants more for him, however, and sweet Hank evolves somewhat reluctantly into a buff, courageous savior who fights for his community’s right to live free from criminal extortion.

Four mythological Chinese creatures imbue the tale with a touch of mysticism and fantasy. Liew’s illustrations and Yang’s story disarm and delight with their Cantonese-speaking family, prewar cityscapes and evocation of a bad-guy underworld that Hank outsmarts in the end with a deft twist.

Yang notes that comic book stories and popular media created by white artists and writers have historically cast Asians, especially Chinese, into the villain role or into the ham-handed assistant who speaks broken English.

But by introducing an Asian American superhero into the contemporary comic genre, Yang moves Asian Americans from “invisibility to inevitability.”

But there’s more. Yang has theories of why Asian Americans have an affinity for the graphic novel genre and are reinvigorating the medium. The first is the structure of the comic book medium, which combines pictures and words.

“Even if it’s a wordless comic, the pictures act like words,” Yang said. “If you look at traditional European culture, words and pictures were always seen as two separate disciplines. Asian culture is not like that. In Japanese printmaking and Chinese art, image and words are paired. Maybe our cultural heritage prepared us for this medium.”

The second theory suggests that children of immigrants, who feel outside mainstream U.S. popular culture, create superheroes who embody heroic success. “In the early days of comics, all the greats were the children of Jewish immigrants,” Yang notes, such as the creators of X-Men, the Incredible Hulk, and Superman.

“American comics have been a medium for outsiders to express their dreams,” and one might even see in Superman an Asian ancestral line, Yang explained to his Berkeley fans.

“Superman has black hair, wears glasses and is mild-mannered,” he continued. “He has an American name and a long, real name with a hyphen. … Superman’s parents sent him to America for a better life,” he said, adding, “I believe Krypton is somewhere in China.”