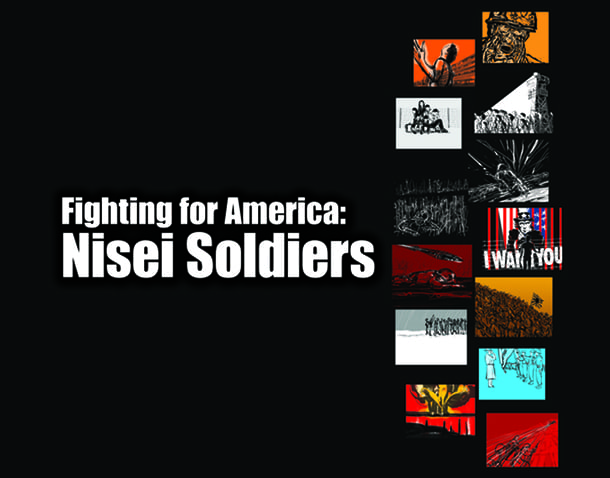 The Speakers Bureau of the Nisei Veterans Committee Foundation (NVCF) maintains a list of Nisei who go out and speak about their experiences—mostly at schools—of being forcibly confined in American camps and/or serving in the U.S. military during World War II.

With those Nisei speakers now aging or with health concerns, retired Seattle Schools and Seattle University educator/administrator Lawrence Matsuda proposed an idea to NVCF to compensate: a graphic novel.

“I explained that a graphic novel was like a bound comic book that could be housed in school libraries and other libraries and catalogued whereas comic books could not,” Matsuda said. “This would be a good way to reach the student audiences.”

NVCF, an educational arm of Seattle’s Nisei Veterans Committee, collaborated with the Wing Luke Museum of the Asian Pacific American Experience and secured a grant from the Japanese American Confinement Sites Grant Program of the U.S. National Park Service to produce the graphic novel.

The result is the over 200-page Fighting For America: Nisei Soldiers, written by Matsuda and illustrated by Matt Sasaki. It features the World War II forced confinement and combat experiences of six World War II veterans with Pacific Northwest ties who were selected by NVCF:

Aside from Kashino, who passed away in 1997, Matsuda interviewed the five other veterans (Matsumoto later died in 2014). He also researched video, Internet, and written works about the veterans. The author of two books of poetry and whose works were featured in numerous periodicals, websites, exhibits and a dance performance, Matsuda found working on a graphic novel to be a different experience due to “pictures and then words.”

“I wrote the words, checked the details with the vets, described a picture that would correspond to each narrative section in a graphic novel frame and made those suggestions to Matt to draw,” he said.

“He returned the drawings and I would edit the words when placed with the pictures. For example, in my descriptive narrative to Matt, I wrote, ‘They marched up a hill.’ When the picture came back with them marching, I deleted that narrative line since it was now obvious because of the illustration. So, I wrote about 160 narrative frame pieces and 160 descriptions of what the pictures might look like to Matt so he could draw it.

“After the first drafts were drawn and combined  with the narratives, I shared each draft chapter with the actual veteran for review and corrections. Overall, the book was not my work alone, but was a partnership involving the veterans, me, Matt, and Cassie [Chinn, deputy director] at Wing Luke, who was in charge of the project and did the editing.”

Sasaki, a sign painter, created explosive, quasi-abstract illustrations by using “a Whiteboard and markers to conceptualize, and a Wacom tablet and Photoshop to create the final images,” he said. “I had never done a graphic novel. I had to Google what the definition of a graphic novel was. I would say the ‘style’ developed organically, kind of like a weed growing in the crack of your driveway.”

Appropriate for ages 9 and above, Matsuda concluded: “Above all, this is an American story.”

“It is an important part of American history,” he said, “and it needs to take its proper place in history and not be omitted or become a footnote.”