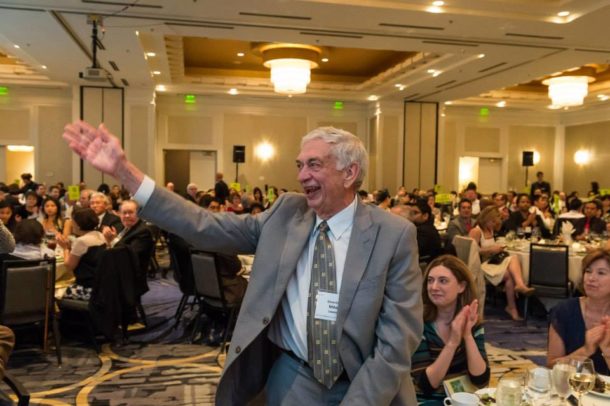 Former Washington Governor Mike Lowry, an early champion of redress payments for Japanese Americans incarcerated during World War II and a passionate supporter of universal health care, passed away on Monday at the age of 78.

Lowry was a much admired friend of the Asian American community during his long political career, which included serving as U.S. Representative for the Seventh District from 1979 to 1989 and Governor from 1993 to 1997.

In 1979, as a first term Congressman, Lowry introduced the first piece of legislation to call for direct monetary reparations to Japanese Americans sent to concentration camps during World War II. Although the bill was unsuccessful, it paved the way for eventual passage of the Civil Liberties Act of 1988.

“Redress was not a very popular subject during that time,” Tomio Moriguchi, a leader of the Japanese American Citizens League (JACL) during that time, recalled. “He was a colleague of Norm Mineta and several other Japanese Americans in the Congress. None of them felt comfortable taking a stand on the issue. I remember that Norm said, ‘Mike was the one who taught me about redress.’ Mike was the spiritual leader of the redress movement.”

Lowry appointed Ruthann Kurose, a Seattle activist, as one of the very first Asian American legislative aides in the U.S. Congress. She worked closely with him on coordinating his legislative efforts with community grassroots lobbying. Lowry also hired Bob Santos, long-time champion of the International District, to work as an aide in his Congressional office after Santos lost a bid for a seat on the King County Council in 1984.

Commenting on Lowry’s death, Karen Seriguchi, former Northwest Regional Director of the JACL, said, “I felt that we lost someone who gave us hope that we actually had a chance of passing redress. He was the sole supporter who carried our cause in the early days. I don’t know what would have happened if he had not been around for us.”

In 1993, As Governor, Lowry signed a bill calling for universal health care, although it never fully went into effect. But he continued his passionate support for affordable care even after his retirement. He faithfully attended the International Community Health Services annual gala, which helps raise money to support uncompensated care for low-income patients.

ICHS CEO Teresita Batayola said Lowry’s leadership as Governor “was a breakthrough in living up to health care as a right. It established our state as one of the better states in providing affordable health care to those who need it while providing consumer protections.”

She said she was deeply saddened by Lowry’s death. “He was a true visionary who strategized across parties and worked hard to realize his vision,” she said.