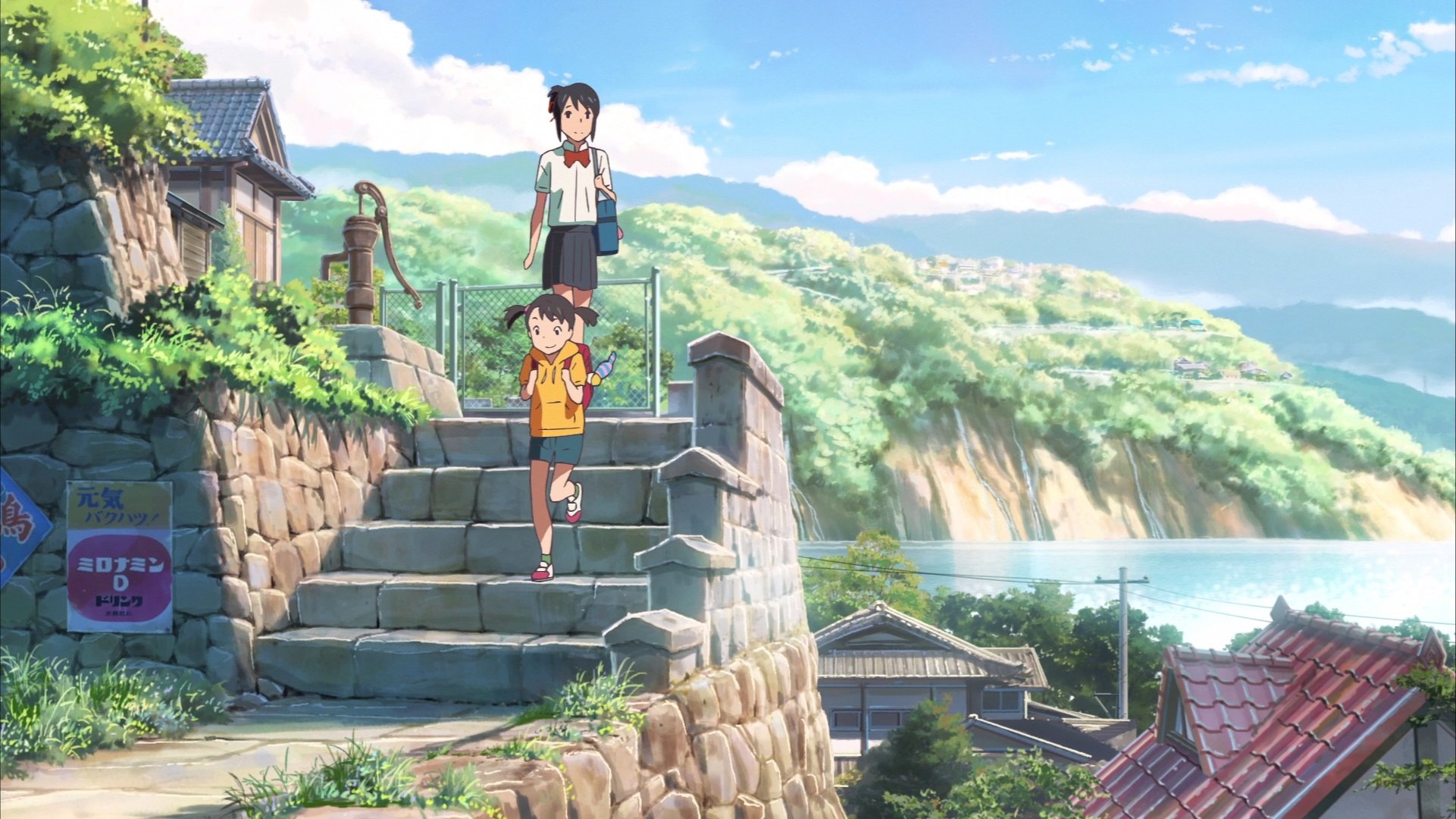 Currently the highest grossing anime feature worldwide, Your Name (Kimi no Na Wa) is based on a 1,000-year old poem by Ono no Komachi. In part, the lyrics read: “Before I slept I thought of him, and into the dream he strayed. Had I known it was a dream, in the dream I would have stayed.” Besides dreams, the film also highlights issues of triumphing over Nature’s unexpected challenges.

No strangers to natural disasters, the Japanese have weathered catastrophes like the 2011 tsunami that engulfed the Tohoku region and the seismic shift of the Great Kanto Earthquake that killed over 100,000 people in 1923. Further, they’ve managed to overcome the destructive consequences of World War II by surviving two atomic bomb attacks. It’s no wonder, then, that a film whose theme is about prevailing over an impending holocaust would resonate with them.

In this case, it’s the once-every-1200-years appearance of Comet Tiamat that will unpredictably trigger a cataclysmic event. As everyone anticipates the coming attraction and looks forward to a colorful but believed-to-be benign light show in the sky, two high school students begin “dreaming” about being each other.

Mitsuha (Kamishiraishi Mone) is a high school student living in the mountainous crater town of Itomoro. She likes to hang out with her best friend, Sayaka, and a guy named Tessie (for Teshigawara) who seems to be in denial over his infatuation with Sayaka. Mitsuha also has a sharp-tongued younger sister, Yotsuha. The two motherless girls live with their grandmother since their mayor father seems to have developed a self-centered political agenda.

Meanwhile, far away in the bustling metropolis of Tokyo, a teenager named Taki (Kamiki Ryunosuke) is busy working in an upscale Italian restaurant every day after school. Taki also enjoys spending leisure time with his buddies. While his mates all nurse a crush on a sophisticated university student, Ms. Okudera, who’s also employed at the eatery, it’s the sweet “late bloomer” Taki whom she’s drawn to.

Suddenly, for no obvious reason, on an ordinary day, both Mitsuha and Taki wake up as each other. In Mitsuha’s bed and body, Taki feels strange and begins to fondle his newly visible breasts in shock, while Mitsuha finds herself in Taki’s bed and body with an extra appendage. Needless to say, both are stunned as are the people around them who wonder why they’re behaving so peculiarly. This switching of bodies continues to occur on and off as the two strive to communicate by leaving clues like updated entries in Taki’s diary or writing their true names on each other’s palms.

But there’s more to this story than just evading a disaster while two teenagers share out of body experiences. For one, Mitsuha’s sagacious grandmother doesn’t appear to be alarmed by her granddaughter’s odd behavior. In fact, she reveals that she, too, once experienced vivid dreams as a youngster as did her daughter, Mitsuha’s late mother. However, she can’t recall the person she dreamt she was.

For Taki, though, the body-switching venture is a lonely one as his family seems to consist only of a single father who scolds him for being late for school.

In Itomori, Mitsuha was bored and longed to be a handsome, hipster Tokyo boy sipping coffee at a real cafe (and not from a vending machine) and touring Tokyo Tower. And when she becomes Taki, Mitsuha’s thrilled she’s able to do those things even though she’s in his body doing them. Still, she senses that what’s happening to them has a deeper purpose.

Back home in her own body, Mitsuha and her sister practice an ancient shinto dance ritual for an upcoming festival, then ferment sake (by chewing rice and spitting it out) to offer to the deities. Explaining that kuchikamizake is the oldest sake in the world, their grandmother suggests that because the girls are making it with a part of their bodies, they’re giving the gods half of themselves.

As Mitsuha hoists her grandmother onto her back, she and her sister pilgrimage through lush forest lands to their ancestral shrine. All the while, their grandmother shares ways in which they honor their ancestors, deities and heritage. When Mitsuha helps her grandmother braid threads into cords, she’s told their people’s history is woven into those threads and that they connect them with their gods. Later, Mitsuha offers a corded bracelet to Taki as a charm that will tie them together eternally.

Besides the engaging characters created by animator Tanaka Masayoshi, the film also boasts minute background details based on actual existing landmarks, like bridges and buildings. In the scene where Mitsuha dances with her sister, there’s a brief close-up of a realistically drawn CD player pumping out the music.

In Your Name, director Shinkai Makato creates a metaphysical film that binds young people with ancient traditions. And, by presenting a scenario that empowers a small town to overcome adversity with strength and resilience, he gives hope to Japanese still affected by the events of March 11, 2011.