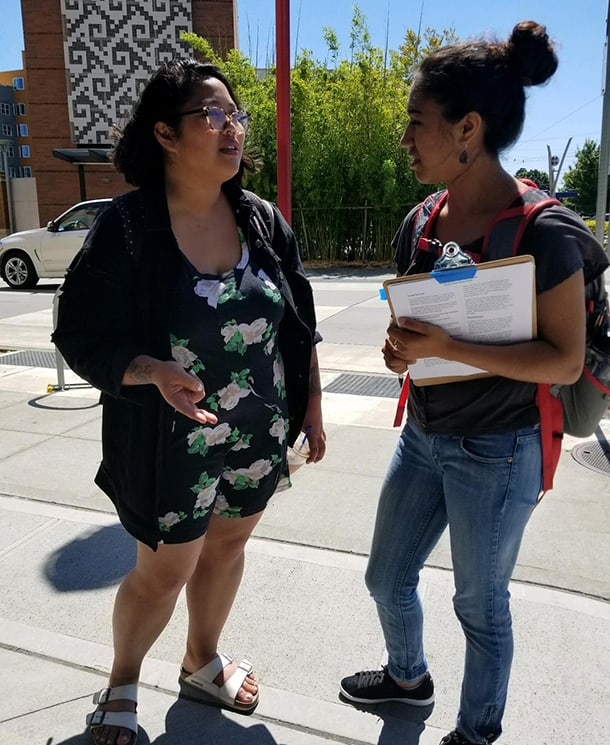 Can you remember a time a boss, co-worker, or customer treated you in a way that made you angry, ashamed, scared, or feeling like something wasn’t right or fair?

Over 100 young workers (ages 16-28) across Seattle have been asked this question in an attempt to find out what it’s really like to be a millennial worker in today’s economy. The stereotype of the lazy, narcissist, still live with their parents, millennial was first introduced to us by Time Magazine in 2013, and is still strong in popular media. Today if you Google “Millenials are,” you’ll immediately find it followed by words like, “lazy,” “the worst,” “stupid,” “screwed,” “lazy entitled narcissist” and more.

For millennial people of color, our lived experiences don’t fit this stereotype. The Bold Leaders of 21 Progress’ economic justice team set out on a mission to uncover the real narratives of those who identify as young POC workers. Many conversations later, a collection of stories has emerged, documenting the complexity of being a worker in today’s economy.

Stories of harassment, disrespect, and humiliation were commonly told by immigrants, black and brown, LGBTQ+, Muslim, differently-abled, and low-wage workers.

Women of color frequently reported experiencing of harassment and danger in their workplace. Lovely, 22, said: “During my time working at the airport, I had experienced harassment from my former assistant manager: He would always tell me that he is attracted to Filipina women, and he would drop hints about asking me out. He also purposely would extend my time so I would miss the last light rail back to UW so that he could give me a ride home. While those experiences were hard at the time, I am fortunate enough to have had the chance to get out of that place.”

Young workers are subjected to blatant and overt forms of racial discrimination with little means for justice. S.A., 18, recalled: “I was called a terrorist by a customer twice while working at Target. I was also screamed at multiple times by customers. I felt unsafe in my work space, which forced me to leave.”

College student Nancy, 21, recalled: “My boss would ask about my citizenship status at least on 3 different occasions. Even though I am privileged to be a US-born citizen, it still made me question my safety because I felt targeted.”

Today’s young workers are far from the millennial stereotype. Young millennial workers are persistent in the face of adversity, and they deeply value safe and welcoming spaces. What they want is pretty simple: To be treated as human beings with respect and fairness. As Lovely put it: “All I hope for in the future is for young workers to have a safe space for us to work in. A place where young workers’ voices and ideas are heard. We want to feel that we are a part of something bigger than just our position in a company or organization.”

The collection will come together in a Young Worker Report to be released in February 2018. To learn more about the Young Worker Rise Up Storytelling Campaign, contact [email protected].