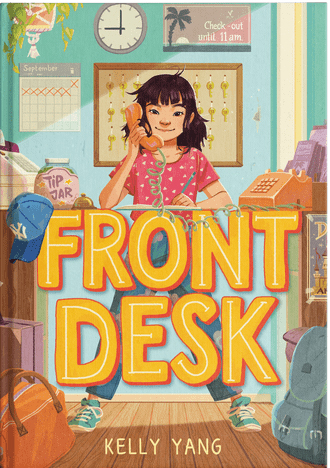 Front Desk reveals the daily struggles of a Chinese immigrant family running a motel told through the perspective of Mia Tang, a strong-minded and passionate ten-year-old. This novel, by Kelly Yang, may be intended for young readers, but it brings up difficult issues of racism, exploitation, economic hardship and family tensions.

Mia’s parents get hired to manage the Calavista Motel in Anaheim, California by the motel’s greedy owner, Mr. Yao. The family moves into the motel, living out of a small room behind the front desk. As they begin work at the hotel, it quickly becomes apparent that Mr. Yao is a harsh, self-serving capitalist and that work at the Calavista is grueling and unending.

The family works day and night at the Calavista Motel cleaning, doing maintenance, and dealing with tough customers. At first, Mia is embarrassed by her family’s circumstances, wishing that she could at least have a pair of jeans to be like the other girls at school. But she soon becomes good friends with Lupe, another fifth grader whose family works for Mr. Yao. Mia also finds community amongst the “weeklies” – a multiracial group of residents at the Calavista, as well as the many immigrants who Mia’s parents secretly allow to find brief refuge in the Calavista.

Throughout the novel, Mia is confronted with moments in which she learns about social injustices. When a motel guest’s car is stolen, she witnesses the racial profiling of black folks like Hank, who is a friend and resident at the Motel. Mia also hears stories from immigrant relatives and family friends who have faced worker exploitation and sees the daily pain and stress her parents bear through financial difficulties.

Despite these hardships, Mia’s determination leads her to take action and stand up for what she believes. With resourcefulness, her writing skills, and hard work, Mia fights for the people she cares about and ultimately, for a more just world.

Yang’s novel demonstrates the power of young people, the beauty of friendships and solidarities, and the importance of protecting each other. Inspired by her own experiences immigrating from China and growing up helping her parents manage motels at a young age, Kelly Yang tells this story with care, sincerity, and hope. The youthful, naïve perspective of Mia brings positivity to the book while also allowing young readers to engage with important and difficult topics which shape the world in which they live.