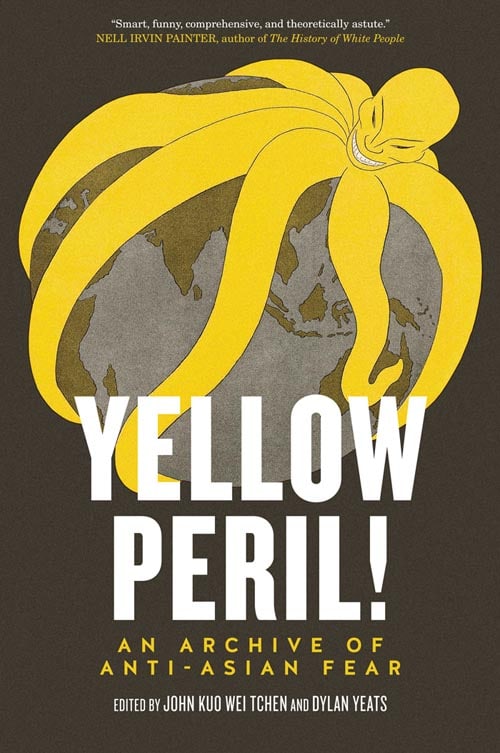 At the Association of Asian American Studies conference earlier this year in San Francisco, I wandered into the book exhibit hall wondering whether I’d find anything new—at least ‘new’ relative to my interests of yesteryear when I taught AAS courses at a couple of campuses. At the Temple University Press table, I noticed a paperback with the face of Fu Manchu on the cover. Hmm, I thought, old stuff. Somebody’s still doing that, eh?

Then my eyes were grabbed by the cover of a large and hefty (384 pages) paperback with a huge yellow cartoon octopus featuring Fu Manchu’s head. The main title was a bold “YELLOW PERIL!” Flipping the pages, one finds an impressive panoply of images, writings and ephemera dating back to the 13th century, all documenting the White racist obsession with the unfathomable threat of East Asia and its presumed insidious ways.

This compendium of writings and visual artifacts begins with an ominous tone-setting quote from the writings of Sax Rohmer, in The Insidious Dr. Fu Manchu (1913):

“[A] veritable octopus had fastened upon England—a yellow octopus whose head was that of Dr. Fu Manchu, whose tentacles were … modes of death, secret and swift, which in the darkness plucked men from life and left no clew behind.”

Meticulously put together by two NYU scholars, Yellow Peril! An Archive of Anti-Asian Fear is very likely the most ambitious attempt to date at the production of a comprehensive repository of materials that document the origins and historical manifestations of that still-pervasive “Oriental phobia” known as Yellow Perilism. The editors, John Kuo Wei Tchen and Dylan Yeats, apparently consulted with a number of highly regarded specialists on Asian American history and letters, including Phillip Choy, my mentor in Chinese American Studies back in the late 1960s and early 1970s.

It would have been so helpful had a resource like this been available in the early years of Asian American Studies when the discipline first emerged at San Francisco State University following the student/faculty strike of 1968-69. I cooked up a course on “Asian Americans and the Mass Media” back in the 1970s and wound up teaching it for some twenty-five plus years. At the outset, I had to rely pretty much on assorted throwaway pieces of writing in mags and rags with titles like “Asian Week,” “Gidra,” and “East/West Journal.” For theoretical framework, there were a few critical essays like “Racist Love,” by Frank Chin and Jeffrey Paul Chan. Added to that were whatever scenes (or entire movies) I was able to tape on VCR from the TV whenever relevant and useful flicks were on (“Fu Manchu,” “Lost Horizon,” “Chinatown After Dark,” “The Crimson Kimono,” etc.).

My faculty colleagues, students and I also conducted interviews on periodic weekends with Asian American actors in Hollywood who had participated in these productions.

Yellow Peril! is essentially an encyclopedic work from which scholars, teachers, students and others can draw for their own edification or work. The book is thematically divided into three parts—each with short chapters and evocative illustrations drawn from pop culture images, pseudo-intellectual essays, and assorted primary and secondary documents.

Tschen and Yeats begin with a portrait of “The Imagined West,” a consideration of how the “Orient,” the antithesis of Western expansionism, became a fixture in the White imagination. Then the imperialistic spread of Western European colonialism is played out in doctrines of “Manifest Destinies.” Thirdly, the focus is on “Indispensable Enemies,” the entry of Asian labor—both recruited and reviled—into the United States. Additionally, Yellow perilism is presented as a framework for viewing the succession of enemies that the U.S. commits to countering since World War II. A final section, an epilogue, calls for a kind of systematic White self-examination in order to weaken and ultimately eliminate Yellow perilism in the Western collective psyche.

All told, Yellow Peril! is most definitely an important contribution to the ongoing evolution of the discipline of Asian American Studies. The uniqueness of this authoritative work resides not so much in its strength as an instrument of interpretation as it is one of confirmation and even revelation. In addition to the meticulously collected written materials (both primary and secondary), the movie posters, the political cartoons, the pop novel and magazine covers, and the comic book characters serve an evocative purpose: to function as a means of stirring in readers and viewers the emotional substratum of Yellow perilism.

This book does for the understanding of racist stereotypes what Jean Pfaelzer’s systematic work, Driven Out! The Forgotten War Against Chinese Americans (University of California Press, 2008), did for the documentation and elucidation of racist violence. While I found the editors’ abstract and occasionally cumbersome language of ‘cultural studies’ and postmodern talk to be annoying, this authoritative work is worth checking out. For sure.