The International Wudang Internal Martial Arts Academy has offered traditional martial arts instruction to the Seattle area for more than a decade, and recently it has relocated and reopened its doors. Over the years, the school has garnered a strong and faithful following, but what keeps students returning goes far beyond the punches and the kicks.

The Wudang martial arts system dates as far back as the 13th century, originating in the mountainous regions of the Hubei Province and is said to be founded by Zhang Sangfeng, a Daoist monk rumored to have achieved immortality. For a more modern reference, Wudang is the martial style of the character “Hundred Eyes” from the Netflix show Marco Polo.

Over time the system split into various groups, but this particular group—the Wudang Dan Pai—claims direct lineage to the system’s original founder. It is composed primarily of three traditional Chinese boxing styles: taijiquan, xingyi-quan, and baguazhang. While the academy also offers various weapons training and the more contemporary Chinese kick-boxing style of Sanda, it is the underlying study of internal martial arts, or neija, that binds the school’s teachings together. Generally speaking, neija is the focus on the more subtle elements of martial combat, such as the mind, the spirit, and the circulating life-energy called Qi. In fact, the school’s Qi-gong curriculum is one of the more popular programs offered.

That fact should not imply that instruction here is solely gentle, however; training here can be both serious and strenuous, too.

“I think the most important thing that I would like you to understand is that Chinese internal martial arts should not just be for health cultivation. We should go back to the root to what martial arts is: Martial,” says Dr. Lu Mei-Hui, one of two headmasters at the school. “When it comes to martial arts, there has to be yong—an application. Without application, all the forms are empty; it becomes dancing.”

As a licensed practitioner of traditional Chinese medicine and a PhD graduate in education, Dr. Lu incorporates plenty of medical theory into her instruction, and communicates with all the charm and kindness of a graceful teacher. But I’ve also witnessed her topple over men twice her size, and there is a certain sternness to her demeanor whenever the conversation turns to self-defense. She is the physical embodiment of the school’s philosophical balance between the soft and the hard.

Her instructional counterpart is Master Chang Wu Na, a New York-born native who speaks fluent Mandarin, and has been a Wudang disciple since his teens. Though he has less formal titles attached to his name, he holds equivalent credentials in the world of martial studies, experienced in over a dozen fighting styles and first began training at the age of four. Both Dr. Lu and Master Chang are the current gatekeepers of the 13th generation of the Wudang Dan Pai.

This is perhaps the first distinguishing factor of the academy. The gatekeeper of most legitimate martial arts lineages often remain back in the country of the system’s origin, but in a serendipitous mixture of personal circumstance and intentional choice, there are two of them that happen to be right here in Seattle.

“If you look at Seattle, the location, the Northwest, it’s a very strong location,” Master Chang tells me. “People in Seattle are a lot more laid-back; actually one might even say that they’re softer, but for Wudang Pai Wushu, it’s kind of a natural fit in some ways.”

Learning how to find strength from weakness is a core element to the school’s philosophy. There are many students who have trained their way out of severe injuries or crippling depression. Others have found courage to face the fears of a cancer diagnosis, or rediscovered their self-esteem after some form of loss. There is a heightened sense of ease amongst those at the school, and much of that is due to the subtle incorporation of Daoism, namely the focus on “balance” and “living in harmony with the natural world.”

This is the second distinguishing factor of the academy. It offers a full Daoist studies program that integrates spiritual philosophy with martial arts. While there is a certain caution to be had at such a union, the instructors prevent proselytization by viewing their approach as more of “school of thought” rather than a “religion.” Developing a student further as a martial artist is still the main focus.

“During the process of developing your spirituality, you’ll learn how to be calm, how to get to the center of your soul, and this directly enhances the training of martial arts skills,” says Dr. Lu. Both she and Master Chang are ordained Daoist priests. “That is why our school has a Daoism study. A lot of philosophy in Daoism can help us find a way out. We don’t just run into difficult situations; instead we learn how to be like water, how to go around it.”

And spiritual development also builds another key attribute in the martial artist, one that some may find even more important than the fighting technique.

“Daoism and martial arts have been connected for a long time, and it’s important that the more you train how to hurt someone, you have to also know how not to do it,” Master Chang adds. “I think that the mark of a good martial artist is the person who doesn’t get into a lot of fights. There’s a concept that says: ‘Learn to fight so you don’t have to fight.’ Instead through training you learn how to interact with people in a better way. You learn how to interact with yourself and the world around you. You learn how to be a better person.” 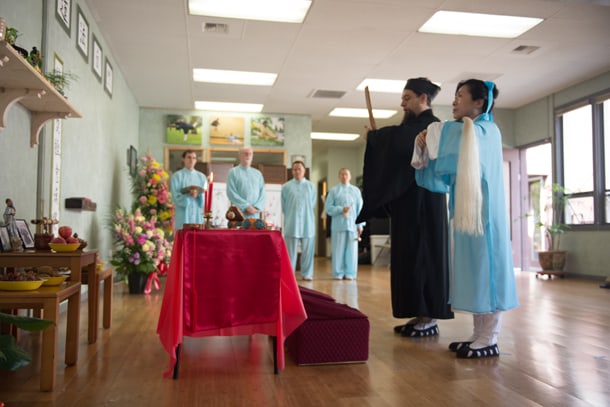