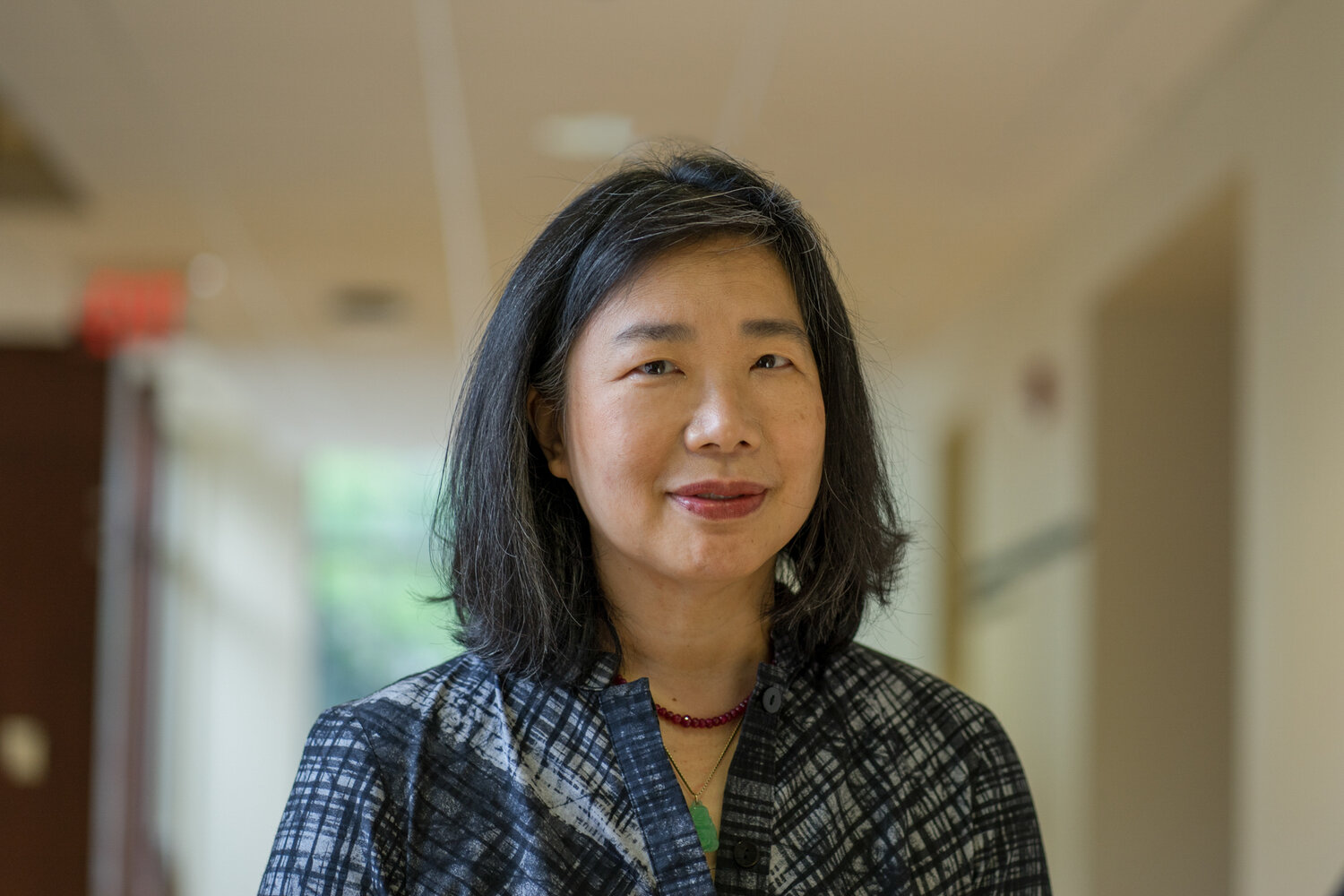 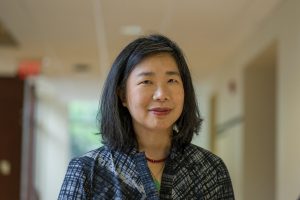 Writer Lan Samantha Chang is the author of All Is Forgotten, Nothing Is Lost, Inheritance, Hunger, and most recently, The Family Chao, published in February 2022. Chang is the director of the University of Iowa Writers’ Workshop, and lives with her husband and daughter in Iowa City, Iowa.

International Examiner: What led you to become a writer? Were you always interested in writing from a young age? Based on your educational background, it looked like you were headed on the road to politics, international relations, or working for a nonprofit organization. What made you decide to join a creative writing program and become a writer?

Lan Samantha Chang: Now, decades later, I see that writing fiction was my only possible route. I had always wanted to be a writer. But I spent a lot of time trying things that didn’t work out and worrying about my future. Up to my mid-twenties, my educational choices were strongly influenced by my immigrant parents. They believed in Ivy League schools and professional degrees. They wanted me to be a doctor; if not a doctor, a lawyer; if not a lawyer, at the very least a person with a stable job! Now, as a parent myself, I understand their perspective, but at the time, their expectations were flattening. I couldn’t make myself learn science, so medical school was out. I was admitted to law school, but decided against it because my mind just didn’t work logically.

My parents insisted on professional school of some kind. I enrolled in the Kennedy School of Government and took on loans. Immersed in the case study method, I realized I had no real interest in working on how social problems played out quantitatively. I woke up one morning feeling completely desolate and knew my future in that direction was hopeless; I realized I would have to go against my parents’ wishes, change my life.

I decided to spend the remainder of my Kennedy School time writing fiction. I enrolled in an adult education class and vowed to spend a certain number of hours per day writing. By the time I’d finished my degree, I’d completed three short stories. For many years after deciding to write, I went through some hard times. My choice upset my mother and father; I struggled with debt and lived from paycheck to paycheck. But I no longer felt flattened—I no longer felt hopeless about my life.

IE: You are the first female and Asian American director of the Iowa Writers’ Workshop. What are the ongoing goals you have for the program? How are you going about achieving those goals? Is there anything you wish to do differently from your predecessors and hope to impart in future directors?

LSC: In the past, the students were dogged by a lack of funding and, to a certain extent, by the kind of gatekeeping that was once very common in the literary community. In the early 90s, when I was a student in the program, there were 20 men in my class of 28 writers, and (if I remember correctly) two writers of color. Changes at the Workshop have come gradually, with time.

When I became director in 2006, I made it a goal to increase and equalize student funding, and the gradual accomplishment of this goal has made a big difference. Over time, we’ve also encouraged informal networks of faculty, alumni, and students, that have brought increasingly diverse writers to the program. The diversity has been aesthetic (including speculative and experimental writers) as well as racial, cultural, geographical.  Each year, we strive to create a new diverse and constructive community of writers, generating and deepening their conversations about poetry and fiction.

IE: I’ve heard that The Family Chao is inspired by your obsession with Dostoyevsky’s The Brothers Karamazov. Had you already been working on a draft when you got inspired or did the draft come afterwards?

LSC: In 2005, I was experimenting with a new project after completing my first novel, when I wrote 100 present-tense pages about a unhappily married Chinese American couple in the Midwest. The husband, Big Peter, was most definitely the prototype for Leo Chao; there were three children, including one named Ming. I put the project aside. Life, and another novel, intervened; I didn’t think of using this present-tense voice in a project involving The Brothers Karamazov until 2013, when I was living in Iowa City with my husband and daughter.

IE: When I was reading your book, I sensed a great love of food through the oldest son, Dagou, and even the somewhat simpler things Ming and O-Lan whipped up in comparison. Was there anyone in your personal life, literary personas, or famous people that influenced you to write about food for this book?

LSC: In the 1960s and early 70s, my Midwestern immigrant family ran a kind of test kitchen for Chinese dishes cooked with American ingredients, which were all we had at the time. There was no online ordering in those days: we were dependent on the supermarket, and we made biannual trips to Chicago to load up on dried mushrooms and such. Like Winnie, my parents planted a garden with jiucai and hard-to-find hot peppers. Because of this deprivation, they were always talking about food, and their obsession wore off on all of their children. I suppose it was only a matter of time before eating and cooking found their way into one of my books. Of course, food means more than love to the characters: it means home, it means love, and it means, for Dagou, artistry.

IE: The Family Chao has a lot of family drama. Your characters show a wide range of different characteristics but one word stands out: loud. Is this book different from your past books? If so, how are they different, and why did you decide to write Family Chao differently?

LSC: None of my books is the same; there’s always some kind of leap between one and the next. Hunger was a collection of quiet, starkly written, primarily first person short stories involving Asian American families. Inheritance is a family saga told in a kind of omniscient first-person POV; All Is Forgotten, Nothing Is Lost is about a white male poet, told in third person.

In writing The Family Chao, I was inspired by Dostoevsky to imagine a problematic father character, and Leo Chao’s voice opened up the tone of the novel, creating a much broader scope for its tone. So there’s profanity, crudeness, yelling; and there’s also the humor that is almost inevitable, necessary. I felt a great sense of freedom to write about immigrants who do not fit the trope of being quiet and long-suffering, and permission to include emotions and behaviors that never would have fit into my early work.

IE: The Family Chao is mostly made up of men, and though you have varied female characters to balance this out, there seems to be a focus on Asian men, particularly in the family. Was this an intentional decision?

LSC: I come from a family of four sisters; The Brothers Karamazov is a novel about three (possibly four) brothers. In writing a meditation on that novel, I originally considered changing the sons to daughters: sisters who wanted to kill their father. But because of my own background, writing about sisters was not enough of an imaginative stretch for me.

Once I decided to keep the brothers and their father, the novel became a meditation on power dynamics, hierarchy; it also became, by necessity, a portrait of three American-born brothers of Chinese descent and an exploration of the different ways Chinese and American cultural expectations had affected the masculinity of each. I also wanted to give these male characters space to develop because I so very rarely—really, almost never—see such stories in American literature.

IE: Who is your favorite character in the book and why?

LSC: Leo Chao is “unsympathetic”: he’s crude, he’s dishonest, and he is a misogynist. But Leo was definitely the most fun character to write about. Ming was also a lot of fun to write about. Also, I became much closer to Katherine Corcoran than I expected. Katherine plays a crucial role in the novel because her story involves two love triangles, as well as some pretty complicated questions about race and identity.

Katherine’s not a member of the Chao family; she’s an honorary member. She’s been engaged to Dagou for years, but lately, her relationship has been threatened by Dagou’s obsession with Brenda, a food server in the Fine Chao restaurant. As I drafted and redrafted, I became more and more interested in Katherine, and I wrote a few passages from her point of view.

Katherine, like most of the other characters, is on a quest, but, unlike Ming and Dagou, her quest does not involve a goal of worldly accomplishment. She’s an adoptee from China who is interested in learning more about her identity. Throughout this novel, unknown secrets of family identity are at the heart of the conflict in the Chao family, secrets Dagou and Ming are living out but have yet to discover. So, they don’t even know what their secrets are yet. Katherine knows what her own mysteries are, and in this way she’s more self-aware than Ming and Dagou. She is also in a position where other people project their feelings about Asian-ness and whiteness onto her.

IE: What are some writers or books you think readers should look out for? What are some of the books that have influenced your writing? What are books you have read recently that you would recommend to our readers?

LSC: As usual, I’ve been reading a mishmash of books: I’m a latecomer to new books because I’m often too busy reading my students’ work. Books I’ve read recently and enjoyed include Kintu by Jennifer Nansubuga Makumbi, the four Lucy Barton books by Elizabeth Strout, The Round House by Louise Erdrich, and The Story of a Brief Marriage by Anuk Arudpragasam. Of course, The Family Chao was influenced by Fyodor Dostoevsky’s The Brothers Karamazov, but other books that interested me during its long composition include Patrimony by Philip Roth and Woodcutters by Thomas Bernhard.