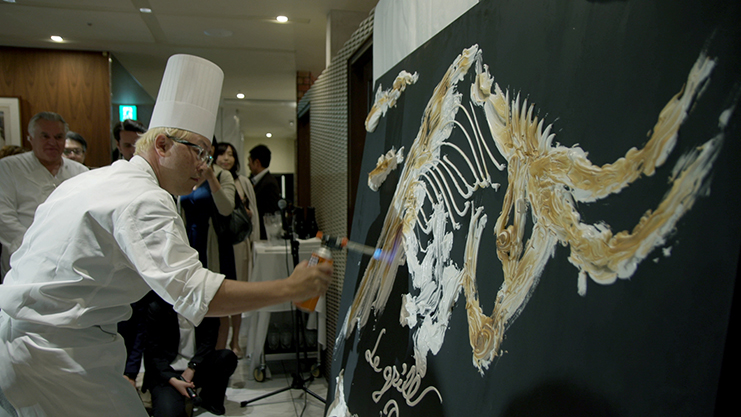 Hironobu Tsujiguchi is a world-renowned chocolatier whose store, Le Chocolat de H, has been recognized as the best in the world for the past six years by a prestigious chocolate appreciation society in France called the Club des Croqueurs de Chocolat. Since 2013, he has entered a competition the society holds at a chocolate trade fair called Salon du Chocolat and has won the society’s highly coveted Gold Tablet six years in a row along with the Best Chocolatier Award for foreigners in 2013 and 2017.

Director Takashi Watanabe, who works as a TV program director for Asahi Productions, first became acquainted with Tsujiguchi through a TV program he produced. Wanting to create the world’s first documentary on a chocolate chef, he approached Tsujiguchi, a man who has the repute of being the world’s number one chocolatier.

Released earlier this year in Japan, Le Chocolat de H played at the Seattle International Film Festival with Tsujiguchi and Watanabe in attendance. It is a film that beautifully portrays Tsujiguchi’s mission to show the world the caliber of Japanese ingredients as he researches and chooses the ingredients he wants to use for the 2018 CCC competition. Some of the ingredients he decides on are salt, miso, mirin, rice flour and cacao beans.

The companies he decides to take these ingredients from are highlighted in the film, giving Tsujiguchi and the owners a chance to educate viewers about the ingredients’ food history, its relevance to Japanese culture and society, and in some cases, the traditional methods used to make them. This careful attention given to the ingredients’ background runs in line with Tsujiguchi’s belief that every one of his creations needed a story to be truly appreciated.

“Nothing really remains after you eat something, so I feel it’s really important to have a story behind each piece where even the salesperson can tell the customer about how it was made, the ingredients that were used and where each of them came from, and how the chef put these ingredients together to make the piece,” he said in an interview. “I feel that it’s very important to have that kind of story because unless you have the story, nothing remains. It’s the way you can create something that lasts and gets passed down, and it’s a very important part of sharing my creations.”

In accordance with his philosophy, the film also tells the story of his life and explains the man behind the confectionaries. It also has interviews with other experts and professionals who are well-acquainted with his work. While watching the documentary, one can’t help but be amazed by Tsujiguchi’s time management skills. Every year, Tsujiguchi researches, experiments and makes his chocolates for the competition; manages his 13 brands of confectionaries; teaches classes in a city far from Tokyo near his hometown; and is a judge for a children’s painting project called Hironobu Tsujiguchi Dream Project.

The IE, in coordination with SIFF, was fortunate enough to sit down and interview Tsujiguchi and Watanabe when they were in Seattle to talk about the production process of the film and Tsujiguchi’s process and philosophy.

International Examiner: The documentary is beautiful and involves components that involve a lot of funding. Did it cost a lot to produce the film?

Takashi Watanabe: Tsujiguchi is a person who creates beautiful things, so I wanted to make sure that I spent a lot of money to create something just as beautiful. There were two cameramen: One would film him doing his activities, and the other would take “sizzle” images, or delicious images of food. Both of our companies paid half of the costs. Well, that was what was decided on, but Tsujiguchi actually ended up paying more.

Hironobu Tsujiguchi: Our production companies decided on 50-50 because they wanted to ensure that both parties were invested, but I talked to a lot of manufacturers to get sponsors. Because of that, I ended up providing more of the money. I only want to use the best ingredients, so I would never talk to sponsors just to get their money or agree to use their products just so they could fund us; I only approached sponsors whose ingredients I believed in so that I could use the best products.

IE: The documentary was so beautiful that it seemed almost like a love letter to Japan. Was this the attitude you had going into the film?

TW: Yes. The idea behind the chocolate is about going from Japan to the world, so I wanted to reflect that into the movie. I also wanted people overseas to enjoy the movie, so I researched a lot of overseas films. In Japan, a lot of the films for TV and cinema have a lot of narrations and voiceover, and they do that to cut their budget by using voice instead of using things that cost a lot of money or visual imagery. That’s the way things are done in Japan; it’s a common practice.

I tried to get enough funding so that I could use as little narration as possible and use more of the visuals I place value in to create these beautiful scenes. I wanted to focus on making sure the quality of the visuals was top notch.

IE: Why did you choose the particular ingredients you used for the final product of your submission to the competition?

HT: I actually got ingredients from way more places, but in order to win, I tried everything, and those were the ones I narrowed down to. Once I decided which ones I was going to use to enter the contest, I approached these companies to ask them to become sponsors, so actually, the ingredients you see featured in the movie were just a small selection of the many that I had tried.

HT: My mother grew up on a farm where they grew rice and had cows, so ever since I was little, I had the experience of watching people [handle food from its origins]: growing and harvesting rice, feeding the dried grass from the rice to the cows, milking the cows and then drinking the milk. From this experience, I knew what freshly harvested ingredients were like.

When you grow up on a farm, there are rituals people do seasonally every year such as the one seen in the documentary, and they have all these old traditions about what to eat when it’s cold and such, so I grew up with all that and the rituals of the festivals as well: I would eat handmade mochi, and in the summer, there are watermelons or freshly-picked strawberries. Because of this, I knew what eating very ripe, fresh vegetables tasted like ever since I was little, and I recognized this was something that was very important. As I started making the chocolates, I knew this was something we could be very proud of and have confidence taking overseas and showing all over the world, and that it would be appreciated.

HT: Chocolate is an essential part of the pastry world. As I started working with chocolates, I really wanted to narrow down its essence. With that desire, I became more focused on chocolates.

IE: What sort of essence?

HT: Depending on where the chocolate is procured, even within Ecuador and different parts of South America, such as Peru, it tastes different. When you go to Asia and Vietnam and Thailand, it’s also different, so I was very surprised by how chocolates tasted so differently, and I wanted to figure out where the best chocolates were from.

IE: Have you decided where the best chocolate is from?

HT: It’s more about which ingredient I want to pair them with. For instance, the chocolate might taste a little floral, and that might inspire me to pair them with cherry blossoms from Japan. Or another chocolate might taste nutty, so then I would want to pair that with a nut, but which nut? It’s a really mysterious process, almost like a chance meeting. It’s all about how they work together.

IE: I noticed you are very generous sharing your expertise with others. What wisdom do you ultimately want your protégées to take with them?

HT: For me, it’s not the technique or the method of making the creations—that’s not so important. It’s more about communicating to them the importance of the love for what they are making and really wanting to make something that makes people happy. If you’re already thinking about how you can make money or how you can make it easier, then you’re already off track. I really want them to understand the importance of how to really love what they’re making and having a desire to offer that to people. I want to nurture professional pastry makers and chocolate makers who have that attitude.