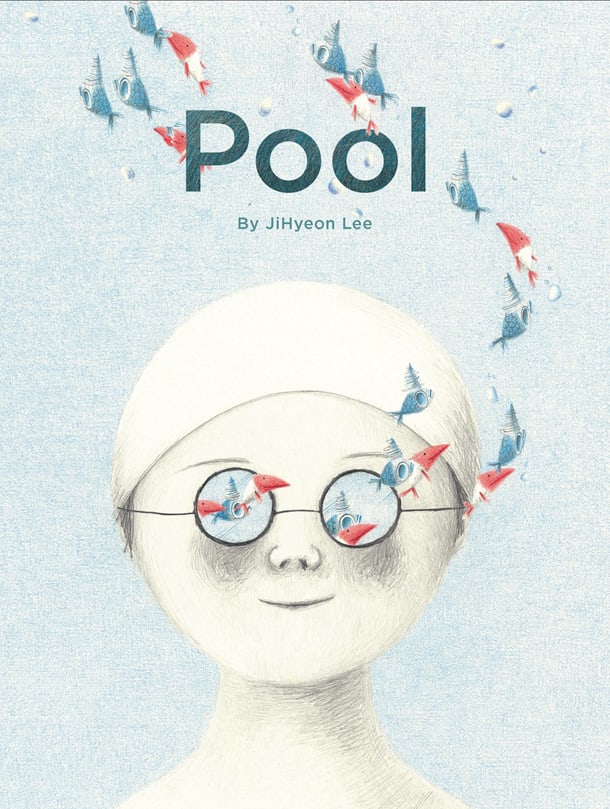 Get your feet wet in Pool, Jihyeon Lee’s latest wordless children’s book. Follow along on a magical underwater journey and discover what lies beneath the waters of the pool.

A shy boy is standing next to a pool waiting eagerly to explore the depth of the water when he gets a rude awakening by a stampede of people. As everyone has jumped and settled into the pool, the shy boy realizes that there is no more room for him above the pool as the chaos and noise at pool’s surface ensues.

Holding a disinterested look on his face at the realization that the reality he is in is nothing more than black and white, he is drawn into the allure of a different world that is full of color and life and the mysteries that awaits him below the pool. Taking a leap of faith, he manages to enter into the water and dives under the black and white bodies at the surface. As he begins to explore and swim around underwater, he is greeted by a girl who is also as shy as he is. The two swimmers realize that they have much in common as both of them decide to explore the deep end of the pool in search of what they can only imagine.

Diving deeper into the pool the two of them find themselves swimming with all kinds of imaginative schools of fish and other sea creatures that comes in many shapes, sizes, and colors. They even play a game of hide and seek with the polka dot eel-like sea animals among the underwater sponges. Their wordless magical underwater adventure eventually takes them to a gigantic white whale where they literally meet eye to eye.

As both parties depart, they come to the realization that their journey has eventually come to an end—and that their shyness that they had in the beginning of the journey had left them. As the two of them finally surface to the top of the pool, it is clear that even though it may seem that all of the fun may have come and gone, these two kindred souls will be calling each other friends for a long time.

The wordlessness of the book provides a nice compliment to the silence of being underwater. This children’s book is also more than just going on an underwater adventure, but it also teaches a good lesson on the importance of friendship and the ability of people to look beyond the surface.