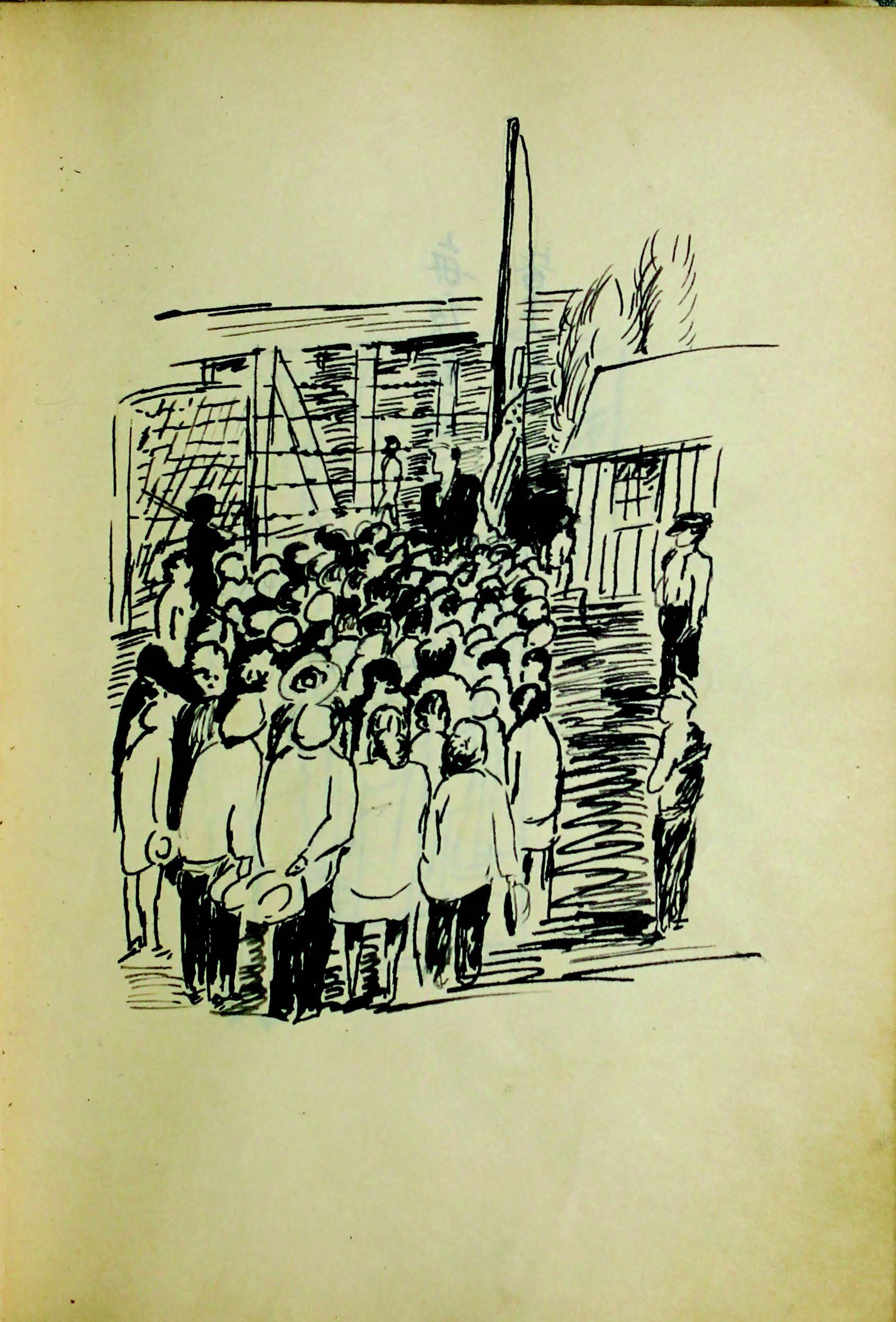 It’s camp as you have probably not seen it before.

Even for people steeped in camp history, even for a region as rich in Japanese American history as the Pacific Northwest, the Washington State History Museum exhibit of Issei artist Takuichi Fujii’s work “Witness to Wartime” is a treasure. The exhibit provides a variety of new and moving vistas on both Japanese American art and history in Seattle and Minidoka. Curated by Seattle art historian Barbara Johns and designed by History Museum Director of Audience Engagement MaryMikel Stump, “Witness to Wartime: Witness to Wartime: Rare Issei Portraits of Seattle, Puyallup, Minidoka is a beautiful example of art treated as history, and history treated as art. Many of the works are on view to the public for the first time, and this is the exhibit’s first stop on a nationwide tour—it is not to be missed.

“It’s taken a village,” says Johns, who first encountered Fujii’s work during her doctoral dissertation at the University of Washington. She cites her partnerships with Stump and the History Museum, with the University of Washington Press, with local historian Michael Sullivan, and with Fujii’s grandson Sandy and wife Terry Kita as crucial elements in making this first exhibit a reality.

The Kitas visited the exhibit opening in September, where Sandy Kita showed museum visitors the cardboard box that contained his grandfather’s paintings, stored first in his mother’s house and then in his own house for decades. (Fujii left about half a dozen photos, no other personal papers or correspondence.) A historian of Japanese art, Kita grew up with his grandfather in a Chicago house, then inherited his grandfather’s work after his mother. His wife Terry kept searching for more information about his grandfather and came into contact with Barbara Johns through the Wing Luke Asian Museum, which owns one of Fujii’s paintings. Johns traveled to the East Coast to see what the Kitas had. She was both “astonished” and “elated,” to see the collection she says now in a phone interview. Once she saw it, she knew that it had to be an exhibition. The Kitas agreed.

Takuichi Fujii was an Issei artist and businessman in pre-World War II Seattle. His work is notable for several reasons. He was one of several Issei modernist painters, so his paintings show us Camp Harmony and Minidoka in vibrant color. The diary is itself the most complete account of incarceration from an Issei to date, according to noted historian Roger Daniels in his introduction to Johns’s book. Comparisons might be drawn to Miné Okubo’s graphic novel Citizen 13660, but for sheer volume and completeness, not to mention from an Issei perspective, Fujii’s diary is unmatched. Moreover, the exhibit itself contains many watercolor paintings of camp life—many more than are in the accompanying UW Press book, The Hope of Another Spring (reviewed in this issue). Those who may be accustomed to seeing these scenes in sepia will find the bursts of vivid color startling.

Fujii’s self-portraits, both as watercolor paintings and as pages within his sketch diary, are moving. Some of the paintings are on corrugated cardboard, which Johns believes (but has been unable to prove) means they were produced in camp, at around the same time as other work that Fujii has done on the same medium. Fujii’s modernist perspectives on wartime Seattle, Camp Harmony, and Minidoka as well as his repeated sketches of the “Instructions to Persons Of Japanese Ancestry” poster on a country fence are also included.

Two small galleries at the History Museum contain “Witness to Wartime” in its current phase. Both have walls painted in a vibrant grayish blue which beautifully complements the simple light wooden frames that Johns and Stump have chosen to mount Fujii’s artwork. The galleries are small, but so are many of the paintings and the sketches selected from Fujii’s diary, which he titled, “MINIDOKA XX.” The exhibit occupies two small galleries in the History Museum. In the left-hand room, Johns introduces us to Fujii through a series of watercolor paintings, including some wood carvings, a self-portrait, and a portrait of a “high school girl” (one of Fujii’s daughters). The right-hand room is a larger room: one with the portfolio which contained the paintings, selected pages from the diary, and more watercolor paintings. The room also includes a digital version of the nearly 400-page diary that viewers can scroll through, complete with Fujii’s handwritten captions in Japanese. The scale of the galleries is intentional, according to History Museum staff member MaryMikel Stump, who worked closely with Johns to mount the exhibit. “We both felt that the intimacy of the smaller galleries was right for Fujii’s work and the content of exhibition. The spaces, due to their scale, have a sense of confinement to them.” The smaller scale of the galleries also allows viewers to see the the work up close, which Stump calls “intimate” and “immediate.”

Johns hopes that Fujii’s vibrant, extensive and closeup views of incarceration will educate people around the country about the reality of Japanese American incarceration. “Many people still may not know [that camp] happened,” she says. “And the more we know about it, the better we understand the vulnerability of people in this situation.”

‘Witness to Wartime: The Painted Diaries of Takuichi Fujii’ is at the Washington State History Museum (1911 Pacific Avenue, Tacoma) through January 1, 2018, The museum is open Tuesday–Sunday from 10:00 a.m. to 5:00 p.m. For more information, visit www.washingtonhistory.org.