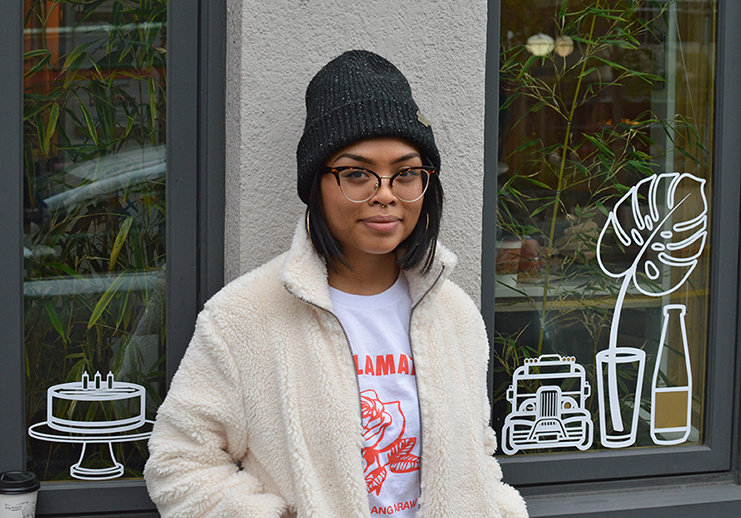 Any town that receives visitors inevitably inspires an avalanche of apparel, pins or stickers that say “Greetings from –” (fill in the blank). Conscious of this fact, Hood Famous Bakeshop created an apparel line and visibility campaign for a place they believe is in danger of being erased: Filipino Town in Seattle’s Chinatown International District (CID.

“Greetings from Filipino Town” is emblazoned on T-shirts, enamel pins and stickers in Hood Famous’s store, both online and, in limited and dwindling supply for the T-shirts, in the shop’s Ballard and CID locations. The campaign launched at the start of October, to coincide with Filipino American History Month.

Janelle Quibuyen, creative director at Hood Famous, worked with artists Derek Dizon and Raychelle Duazo to design the apparel. On the back of the “Greetings from Filipino Town” shirts are icons and symbols associated with Filipino culture: Fish sauce, the Santo Niño figure, and more modern additions, like Hood Famous’s own acclaimed ube cheesecake.

“When I think of Filipino Town, I think, yes, there is a physical area, but because of how huge our diaspora as Filipino people are, there are certain things that travel with us,” Quibuyen said.

The shirt Duazo designed features a bouquet of Filipino flowers and plants and the word “Ingat,” which means “take care.”

The idea for the campaign started brewing when Hood Famous was considering the CID for its next brick and mortar location. The goal is to share Filipino history in the neighborhood with people who may not know about it, Quibuyen said. Hood Famous ended up moving into The Publix Hotel, which once housed many Filipinos. “To share the space with that legacy is very meaningful,” Quibuyen said. According to its website, Hood Famous is currently the only Filipino food establishment in the neighborhood, and the first one in over 15 years.

The campaign was also intended to fight efforts to dismiss Filipino American history in the CID. In July 2017, retired teacher Betty Lau convinced the City Council to cross out references to “historic Manilatown” from a resolution. After pushback from Filipino community members, the Council approved an amended resolution recognizing “Filipino Town” as a historic neighborhood in the CID. Yet as of summer 2018, some in the CID acknowledged in a public meeting that they are still trying to stop the term “Filipino Town” from being recognized and taught about, believing it to be historically inaccurate.

Such efforts are “something that we have to combat and resist,” said Quibuyen. “I think the message is really to claim that term and also to claim this space and history that we have here in this neighborhood.”

The CID shaped the lives of the creative minds behind Hood Famous Bakeshop: Quibuyen, her brother Geo Quibuyen, and his wife Chera Amlag.

Quibuyen grew up around Bremerton where her dad was stationed in the Navy. “There wasn’t a lot of Asian grocery stores out there,” she said. To cook the food they grew up with, her parents would make weekend trips to the CID. Quibuyen later joined the Youth Can program at the Wing Luke Museum, and Geo worked there. Amlag worked at Washington Asian Pacific Islander Families Against Substance Abuse (WAPIFASA), now known as WAPI Community Services. At the time, there was less awareness of Filipino Town.

“As a child I didn’t hear “Filipino Town” unless it was somewhere in a different city,” Quibuyen said. Like many people, she learned about the history of Filipino American contributions to the neighborhood from organizations like the Wing Luke and the Filipino American National Historical Society (FANHS).

Growing up, Duazo spent more time in Beacon Hill than the CID. Though that neighborhood has a significant Filipino presence, there was a lack of Filipino restaurants, which continues to today. Inay’s Asian Pacific Cuisine — where Amlag and Geo Quibuyen used to host Food & Sh_t pop-ups — closed in 2016, and Kusina Filipina in 2017.

“I think the power of taking up physical space in a neighborhood is pretty incredible,” Duazo said. “I do have a longing, even still, to just go to a place and there’s Filipino spots all over the block. Not necessarily just food, but any spot where I can be with other Filipino folks and just revel in each other’s presence.”

The apparel and campaign have inspired thankful reactions, Quibuyen. The shirts quickly sold out online and in stores. A lot of buyers came from outside of Seattle, including cities like New York, Los Angeles and San Francisco, which have historic Filipino Towns — but also cities that don’t have them.

While the apparel is limited release and won’t be restocked, Quibuyen hopes to work with more artists to create new designs in the future.

Auriza Ugalino, a regular at Hood Famous Cafe and Bar (and in full disclosure also works as community relations manager at the International Examiner) owns two “Greetings from Filipino Town” T-shirts and several pins. She and many Filipino friends live in the newly reopened Louisa Hotel. “We all agree we want to live here, because of the strong history and because we really, firmly believe that Filipino Town exists and that we have a right to be here and that we have a right for recognition,” Ugalino said.

Ugalino wears a “Greetings from Filipino Town” enamel pin on her bag. As she takes it with her throughout the city, Ugalino said, “I’m hoping that people see it and they acknowledge that there’s a Filipino Town presence in Seattle.”

Growing up, Duazo said she “didn’t have a lot of pride in being Filipino.” She hopes that “people see campaigns like this and it gives them permission to be fully themselves.”

Chinatown-International District coronavirus updates, July 10, 2020—The latest news and information from the neighborhood and beyond

From outrage to apology: Japanese Americans’ passion and push for understanding Black Lives Matter on display in the CID

More than just happily ever after: A story of Taiwan’s first openly married gay TV celebrity