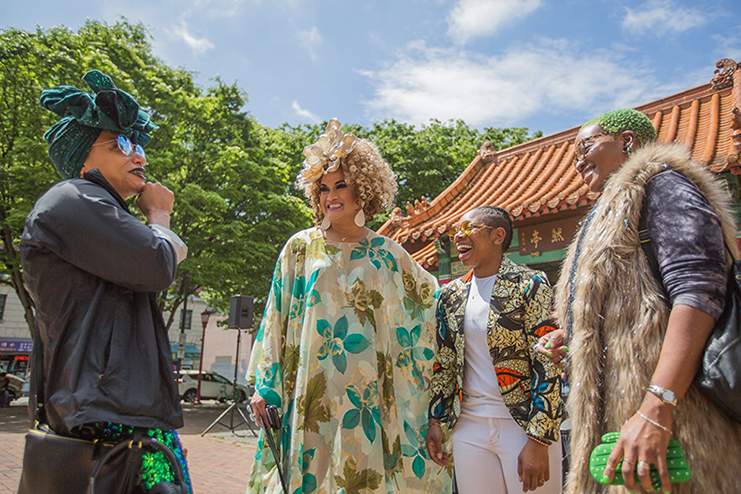 After two virtual celebrations, Pride ASIA Fest is back in person at Hing Hay Park on May 29 from noon to 4 PM., followed by an after party and open mic at Hood Famous Cafe + Bar at 5 PM.

Founded by drag performer and social activist Aleksa Manila in 2012, Pride ASIA has a mission “to celebrate, empower and nurture the multi-cultural diversity of the LGBTQ communities through the Asian Pacific Islander lens.”

The festival’s keynote speaker is Joel Tan, the Wing Luke Museum’s new executive director and the first queer Filipino man to serve in that role. It’s a way to welcome Tan (who hails from Hawaiʻi and the Bay Area) to the Northwest, and celebrate ongoing collaboration between the museum and the LGBTQ+ Asian and Pacific Islander communities, Manila said. Tan is also one of the Sisters of of Perpetual Indulgence in San Francisco, an LGBTQ+ group that engages in drag performance, community safety and service. Manila said it’s a mystery whether Tan will give a traditional keynote speech, or if he will perform: “Come to Pride ASIA Fest to find out,” she said.

Pride ASIA Fest had to stay virtual for the last two years during the pandemic. This had the advantage of accessibility – people could watch any time, anywhere – but it was also bittersweet, Manila said.

“When you see someone that you hadn’t seen and are seeing them, but it’s through a kind of monitor screen, and that human sort of desire, you know, to hug someone, and give them that human touch that was missing – there’s a bit of that pull on the heartstrings,” she said.

Organizing Pride ASIA Fest during the pandemic, Manila saw how resilient the community of LGBTQ+ Asian American and Pacific Islander communities are. “However individual our experiences have been from childhood to adulthood, whether it’s, peer to peer, or it’s society, at work, personal church, community, we learn to survive, we learn to be resilient.”

Still, the pandemic isolation removed people from resources and community ties. People who lost their jobs or faced housing instability turned to Pride Asia for help. During the pandemic, Pride Asia had to limit some of its programming such as Dim Sum Dialogues.

Given the importance of celebration and optimism for marginalized people, virtual Pride Asia Fest celebrations tried to mimic the live ones as much as possible, Manila said, with DJs, performances and more. “It’s like saying, no natural calamity is gonna stop us.”

Manila hopes this year there is less anxiety and fear.

“I think the focus this year is around really just excitement around communing as we reemerge from a pandemic,” Manila said. “We fully recognize it’s still active and still out there. But at least our society or community at large is slowly opening up its doors.”

Manila said Pride ASIA embraces the values of community shared by many Asian American and Pacific Islander cultures. “In Filipino culture, we call it bayanihan. It’s this idea of communing and helping each other, helping each neighbor out. You know, the classic symbol of bayanihan is a group of people carrying a house from point A to point B, away from potentially flooding or any sort of natural calamity.”

Manila has heard excitement from the community about resuming Pride ASIA Fest in person. She looks forward to seeing people in person, the energy of the live performances, seeing the community with the greenery and nature at Hing Hay Park, and Pride Asia’s partner organizations sharing their programs and services. It’s an opportunity for people of all ages to dance to music, learn about the diverse Asian American and Pacific Islander communities and LGBTQ+ communities, and support local businesses in the CID, she said.

“Me personally, I miss our AAPI elders at the park, smiling, watching, say a drag queen, perform a Chinese language opera – that just brings joy,” she said. “It’s been years since we saw that.”

Pride ASIA Fest is free, all ages and welcome to all. It will take place at Hing Hay Park on Sunday, May 29 from noon to 4 PM.