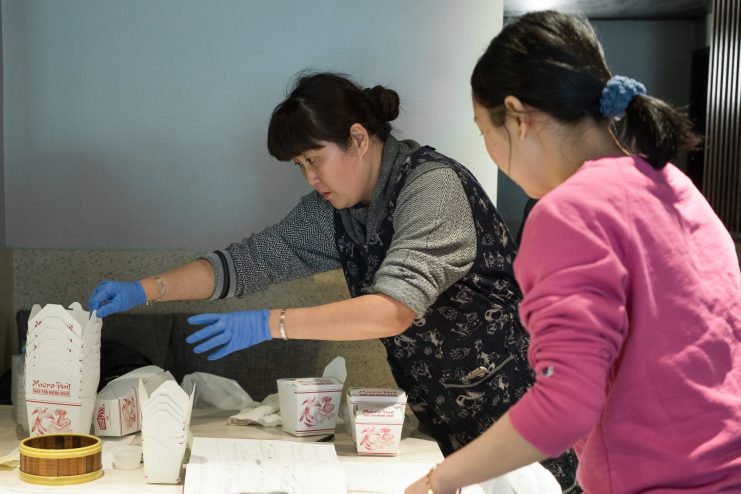 The daily specials at Jade Garden are still written out on a white board in Chinese and English, but no customers are allowed to dine-in there — or at any restaurant in the state, following an order from Gov. Inslee intended to slow the spread of novel coronavirus.

Jade Garden’s brightly-lit dining area has now been transformed into a station for packing to-go orders. Extra hot sauce sits at hand on the counter, and a table is piled with disposable takeout containers. Mei Chan, Jade Garden’s owner, stacks a metal cart high with round bamboo steamers filled with dim sum items from the kitchen. They are packed into plastic clamshell containers by a bustling team, mostly members of Chan’s family.

Eric snags bites of noodles from a fork when he has a spare second, between helping customers, fulfilling orders, and making sure things are running smoothly. Eric’s younger siblings, Ivy and Evan, are in constant motion, occasionally taking phone orders from customers. His wife Fiona, and friends from college, are also in a frenzy of movement, volunteering their help.

Almost all the staff were let go recently, as they couldn’t afford to pay them — some 40 waiters, cooks, dim sum cart ladies — and some who they didn’t want to lose are too afraid to come, and risk exposure to coronavirus, Eric said.

“They see there’s no point in working anymore, they think it’s like WWIII,” Eric said. “Some people take it to the extra point.”

In the first two weeks of March, Jade Garden lost 80 percent of its business. The restaurant was already suffering in the weeks before Inslee’s order closing dine-in at restaurants. Eric attributes this to the stigma that Asian businesses are facing after the spread of coronavirus.

Now, “we live off deliveries and to-go’s,” according to Eric. Around 80 percent of these are from a Chinese grocery store app, Weee!, which buys about 300 to-go orders from Jade Garden per day and delivers them to Chinese grocery stories in the Seattle area. The orders are placed the night before, and the family team starts on them in the morning.

To-go orders from customers provide some additional support. As the orders are packed, customers trickle through the doors of the restaurant. They peek around, look at the menus, and leave with bags of takeout.

A Facebook group created by community members to help Chinatown-ID businesses and others owned by people of color, called “Support the ID – Community United,” brought in around a 30 percent bump in business that Eric is grateful for.

“I am incredibly moved and in almost tears as I write this message to the members of this community Facebook group,” he wrote in a March 15 post in the group. “For the past month and half everyone has been feeling hopeless. A sense of just ‘when will it be our turn to closedown’. After stumbling upon this group there is a dim light of hope.”

It’s not always easy to keep up good spirits facing dire circumstances like these. “Mortgages don’t get paid, our spirits aren’t that high,” Eric said. “Every day we’re working like 12 hours, so it sucks. But it’s okay,” he added. “We’re handling through it.”