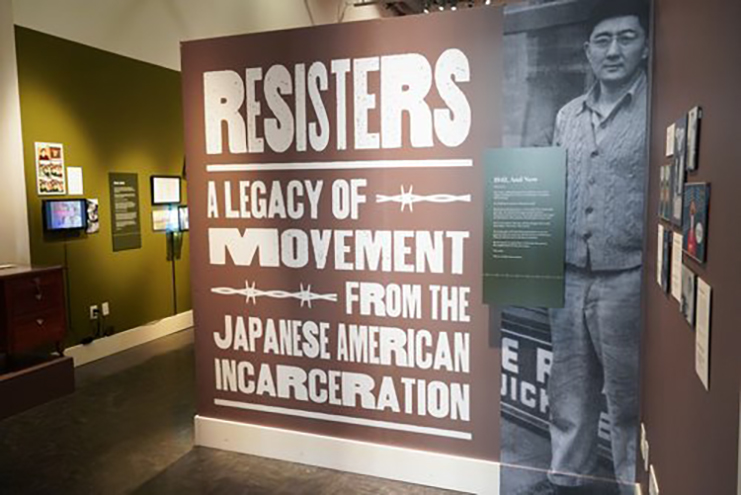 Much of the history of the forced incarceration of Japanese Americans we learn is about how quiet and obedient the community was—and even how we were respected for our complacency. Therefore, resistance to the concentration camps is systematically overlooked and silenced. This exhibit showcases all the ways in which people resisted their unjust displacement.

When we think of resistance in the historical sense, we often think of movements and marches. Not to say that these didn’t happen, but the resistance of the Japanese Americans often happened behind closed doors—or at least behind the thin walls that barely separated families in the barracks. Through art, draft resistance, the building of schools, and even through short moments of joy, the Japanese Americans rebelled against their incarceration.

Resisters: A Legacy of Movement From The Japanese American Incarceration, a new exhibit at the Wing Luke Museum, follows a timeline which begins on February 19, 1942, which marks President Franklin D. Roosevelt’s signing of EO 9066, effectively forcing the “removal” of JAs on the West Coast to concentration camps. As you walk through the extensive exhibit, you walk by art pieces made by Michelle Kumata, photographs of Japanese American activists like Yuri Kochiyama and Cherry Kinoshita, and one of the central exhibits: an interactive piece made by NaOmi Judy Shintani.

I got the privilege of attending the museum alongside folks in the University of Washington’s Nikkei Student Union. We all admired the exhibit’s dedication to showcasing the comprehensive history as well as the imperative of continuing the resistance to today’s movement for intersectional justice.

One of the exhibits that made this exhibit unique to me was its inclusion of a mixed media piece by Ellen Bepp of the six Asian women who were killed in Atlanta on March 16, 2021: Daoyou Feng, Hyun Jung Grant, Suncha Kim, Soon Chung Park, Xiaojie Tan, and Yong Ae Yue. During the height of COVID and the anti-Asian hate that resurfaced in the form of hate crimes and gendered violence, it was impossible not to think about its resemblance to our country eight decades ago.

The incarceration of our families during WWII didn’t end when people were released; the racism and xenophobia that served as the root of our incarceration continues to oppress marginalized communities. The Tsuru (cranes) hanging at the end of the exhibit serve as a reminder of our civil duty to continue fighting for those being detained and separated from their families at the border.

There was much more to this exhibit that I haven’t touched on and many more layers of connections and history that is impossible to encapsulate in a short article but even more reason to visit this exhibit and walk around the rest of the Wing Luke Museum! They are open 10AM-5PM Wednesday-Sunday. The exhibit is on view until September 18, 2023.