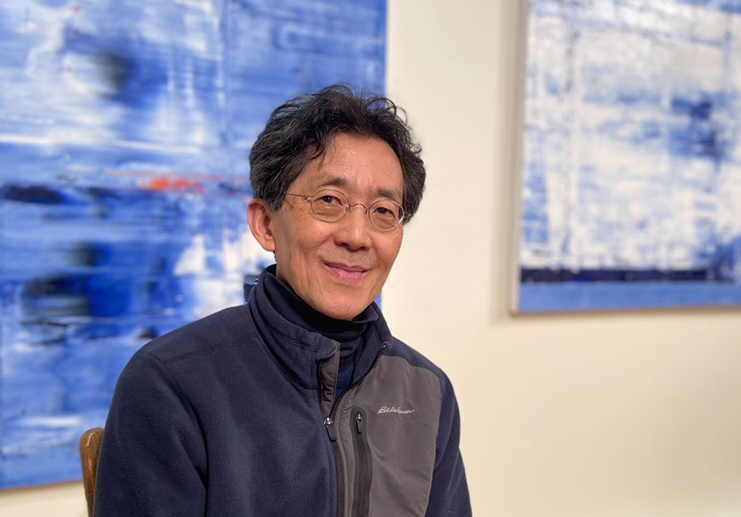 For 25 years, the ArtXchange Gallery in Seattle’s Pioneer Square has been showcasing contemporary art focused both on the Seattle community and on global influences. This month, ArtXchange hosts an exhibition by William Song, a former attorney who pivoted to art following a change in his life circumstances.

Song had always been interested in visual art, but majored in English Literature and then pursued law school. “I did drawings and watercolors while in law school, painted for a year in Kyoto, Japan following law school, then painted for several years after settling in Seattle and working as a lawyer,” Song recounted. “While painting and being a lawyer are an unlikely combination, I also had a capacity for cognitive analysis, went to the University of Pennsylvania Law School, and entered a highly competitive and pressured professional career without understanding the eventual consequences of that style of life on one’s state of being.”

Visual expression, for Song, had always been a hobby. “Growing up as a child, drawing and painting came easily to me so I never considered it as a skill or talent,” he said. “It was just something I did naturally.”

Only much later did Song examine art in depth. “What moved me about paintings in my twenties was how energy organized and concentrated within the space of a strong painting could radiate such immediacy, how resonant color and form could convey so much awareness,” Song recalled. “It awakened in me an inner knowing that I had a strong capacity for this type of expression.”

But Song came to find painting incompatible with his career in law. “There was too much inner conflict trying to paint in conjunction with the long hours and stress of being in a complex field of law as an attorney, and my wife and I starting a family.,” he reported. “After a long absence, I started painting again because while accomplished as a lawyer, that career did not fulfill me at the creative heart level.”

Initially, he found satisfaction in painting again. “I was surprised by deep joy and energy arising within me, as if the passion for painting had not died from being dormant but had just been slowly germinating,” he said. “It was then that I realized that painting was not a choice, but something essential to my life and state of being.”

Song finds himself attuned to the energy in visual art. “Painting with color and form predates verbal language, so there is something very ancient in their energetic significance,” he described. “These experiences increased a sensitivity to energy vibrations and frequencies and I sense color and form in my work as vibrative resonances within me.”

Most of the paintings on display at ArtXchange emphasize abstract pastels, though Pulse features dark hues in the blue to violet range, “My non-representational paintings do not attempt to depict or represent something else,” he said. “All they are is color and form as pure vibrative energy.”

Each work attempts to capture a snippet in time. “A painting, unlike writing or music, is not dependent on a passage of time to convey itself fully,” he said. “That sense of wholeness within stillness in the present moment for me is a way to try to echo the power of consciousness and unity that exists in the infinite present all around us.”

While each painting might capture a particular moment, Song can take years to complete an individual painting. “A painting goes through stages,” Song asserted. “Just as a music composer considers what combination of aural resonances and frequencies to unify in relationships through instruments, pacing and volume, a painting is projecting relationships as a resonating field of energy frequencies.”

Song trusts himself to know when a work’s progress is complete. “Regardless of what is happening within a painting, it is not finished for me unless it holds still-points and equilibrium within its movements, where extraneous or non-essential elements are reduced as much as possible, where all parts of a painting are in relationship and unity,” he said. “Its energy has to be clean, expansive and have space to breathe. Ultimately, it is an inner knowing.”

In addition to sensing energy, Song also finds his visits to art museums influential in his painting. “A couple of my favorite paintings are late still lifes of the 18th-century French painter Chardin,” he said. “While his representational work may seem unrelated to my work, certain of his paintings such as Glass of Water and Coffeepot and Two Rabbits, a Pheasant and a Seville Orange on a Stone Ledge are exquisite paintings of profound stillness and depth, volume, radiating tenderness, humbleness, love. For me they express a powerful inner consciousness.”

Song hosts his full painting portfolio online for public viewing, but made specific selections for the ArtXchange exhibition. “The paintings developed during an intense period of work following the COVID pandemic lockdowns and the turmoil arising from those times,” he said. “Some of the paintings that resolved during this period were begun many years earlier.”

The public show is intended to immerse the viewer in the energy of these large life-size pieces. “Especially given the overwhelming stress of the last few years upon all of us,” he said, “I intend these paintings as an act of positive and open-hearted affirmation.”