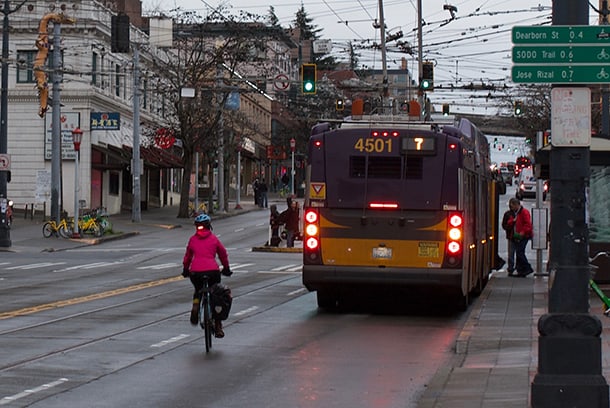 People in the Chinatown International District (CID) want to ride bikes more often–but they don’t feel safe doing so because there aren’t enough protected bike lanes. This was one of the findings of recent UW graduate Ziyi Liu’s Environmental Studies capstone project, which was also part of his internship with Seattle Neighborhood Greenways.

On his way to the Greenways office in Pioneer Square, Liu would notice people biking on South Jackson Street, in a road shared by cars, buses and streetcar tracks. With such little room for cyclists, it struck Liu as dangerous.

The network of bike lanes from downtown Seattle to the CID is broken up, with the lane ending at the intersection of 2nd and Washington streets, leaving a gap. “That leaves people in this area in a very vulnerable situation if they’re riding bicycles,” Liu said.

Building connected bike lanes throughout the city is one strategy for Vision Zero, Seattle’s goal of preventing deaths and serious injuries in the streets.

“Bike users are vulnerable in the event of a crash because cyclists share the same infrastructures with motorists but they have no physical protection from bicycles,” Liu wrote as part of the project. Biking accidents often happen when people in parked cars open their doors suddenly without noticing cyclists, Liu said. This is why protected bike lanes, which include a physical barrier like a curb, planter or plastic barrier separating cyclists from traffic, are safer.

Liu’s project focused on how bike infrastructure in the CID affects how safe people think it is to bike there. He surveyed 80 people in the neighborhood about what prevents them from riding bikes more often, as well as where they would ride in the CID if they felt safe enough.

The most common reasons people didn’t ride more often were weather and fear of vehicles, followed by the time it would take to reach a destination, and hilly terrain. The results were similar to those of a 2013 survey conducted by the Seattle Department of Transportation, Liu noted.

If people felt safe enough to bike more often, they’d be most likely to go on recreational trips, followed by commuting to school or work, and grocery shopping. “If you build protected bike lanes, people feel safe enough riding bicycles,” Liu said. “As time goes by, they feel that bicycles could be their primary transportation mode.”

Though it goes beyond the scope of his capstone, Liu said it would be valuable to map the destinations people want to go to in the CID—such as grocery stores—and “see what kind of bike lane design could meet people’s needs,” Liu said. As it is, “the current bike lane plan makes it impossible to ride bicycles to get there.”

Liu’s project also looked at the demographics of how people bike. While most people who took his survey were Asian and Asian American, this group was also most likely to say they’d never used a bicycle in the past two years. White respondents were the most likely to say they used bikes more than monthly (60 percent). However, Liu found that it’s not just young white professionals who bike regularly. “A lot of people, especially people of color, are using bicycles nowadays,” Liu said. “This trend is definitely going up.”

There may be cultural reasons why some people don’t bike more, Liu found. A woman in her 50s told him she never rode bikes, because she was taught “good Chinese girls stayed at home.” Many of the women in her age group also never learned how to ride growing up.

Bike commuting is connected to the language barrier in the CID, Liu said. A City survey found that people in CID commonly use public spaces such as parks, and many people choose to stay in the neighborhood and not visit parks elsewhere in the city. This could be because many street signs in the CID are translated into Chinese, Japanese or Vietnamese. “It’s not very doable for lots of older people in the community trying to use bicycles to travel to other places,” Liu said, “because most of the time they either do not understand the language or they don’t know where to go.”

People told Liu that if there were more safe bike lanes, they would choose to bike around the neighborhood, up the hill to Little Saigon, down to the downtown waterfront, or even to Capitol Hill.

“Building this kind of bike infrastructure just kind of guarantees the safety of most people using bicycles, and it’s about getting people of ages and abilities to the street–and also it’s about the street for people instead of cars,” Liu said.

When more people are in the streets on bikes, rather than cars, there are more encounters and communication between them, Liu said. Not to mention the health and environmental benefits of more people riding bikes.

“A protected bike lane is not only for cyclists, but it’s for everybody—it’s about the community and community happiness.”