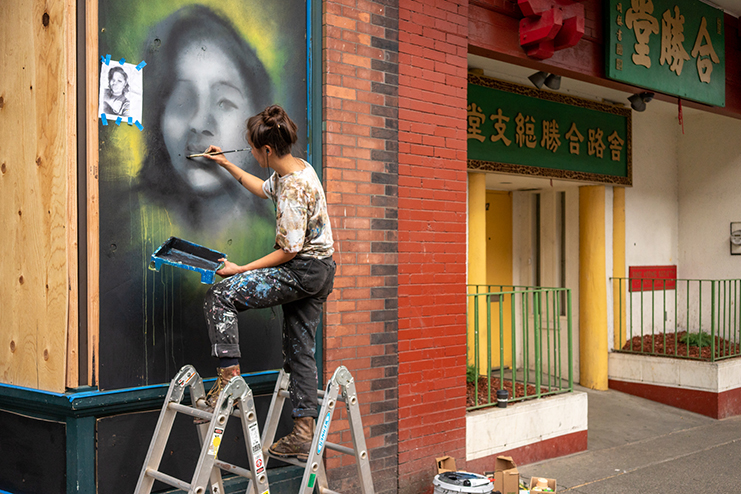 For a span of time, buckets of paint and art supplies lined each block of the Chinatown-International District (CID) where groups of masked artists, fresh out of quarantine, gathered to create meaning out of blank pieces of large plywood and sheer human ingenuity.

Within days, the entire neighborhood doubled as an art walk.

When the pandemic, coupled with the Black Lives Matter uprisings, forced businesses to board up in May, the community sprang into action. Organizations and individuals rallied to beautify and support the CID as it struggled to adjust to an economic crisis and a tense political climate.

“With everything that’s happening with the pandemic, police brutality, and what happened to George Floyd, I was really stuck about what I could do,” says local artist Christina Nguyen. “Art was a way I felt I could really show up for and come together with my community.”

Many of the CID murals came about organically, largely coordinated in group text threads, on social media, or in person at Hing Hay Park — there were no grants or incentives, just donated supplies and people wanting to help. Moses Sun was invited by the team at the Wing Luke Museum to lead work on a mural that now protectively wraps around the building and features a few faces of the many individuals that have fought for the rights of Asian Americans and African Americans in Seattle: Diane Narasaki, Larry Gossett, Bob Santos, Dorothy Cordova, Pramila Jayapal, Sharon Maeda, Wing Chong Luke, Dolores Sibonga, Donnie Chin, Sam Smith, and Ruby Chow.

“The collaboration felt like a return to things I knew, but also a return to things I didn’t know in terms of the history of Seattle,” says Sun. “The way that people were and the flow that we had together, there was such ease in discussion and deliberation. It felt kind of divine.”

Sun likens the process of creating the mural to that of a dinner party. All of the participating artists — with their varied personalities, perspectives, and experiences — brought something to the table. The main purpose, he says, was to get a message out: “We’re here. We see you. We stand in solidarity with you. Where do you stand?” Sun hopes that the mural serves as a conversation starter for community members walking by, an invitation to pause and actively reflect for a moment before carrying on.

The piece covers three sides of the museum, painted indigo with yellow and red detailing. Indigo has a long history of significance in both the Asian and African diasporas as a dye, but also as a spiritual color and a valuable commodity entangled with the slave trade.

Meanwhile, a few blocks away, Nguyen, in collaboration with Sami Hilario, worked to create art for Ping’s Dumpling House, a small multigenerational restaurant located on King Street. Nguyen spent a lot of time in the CID as a kid, going grocery shopping with family every Sunday after church, doing activities at the Danny Woo Community Garden, and participating in a number of teen arts programs in and around the neighborhood. In addition to the mural at Ping’s, she also painted a piece on a board at the electronics repair shop in Little Saigon.

“The CID is very important to me and to many of the other artists as well. It was really sad to see how a lot of businesses were hit hard because of the pandemic,” she explains. “And after being quarantined for so long, painting in a mask and being around other people was so nice.”

Nguyen describes how people would stop to talk to her while she was painting. Everyone was excited to see life returning to the neighborhood. While painting the Pokémon character Pikachu on the board in Little Saigon, adult men at the bus stop across the street would gleefully shout to her Pikachu’s signature refrain “Pika, pika!” before boarding the bus. She had another short but meaningful exchange with a Vietnamese elder who was out shopping for groceries and took some time to compliment Nguyen’s work in Vietnamese. Nguyen, who is also Vietnamese, was able to give her an appreciative ‘thank you’ in return.

It was this kind of supportive interaction, between curious passersby and the artists at work, that left a real impression.

“While we were working on the mural, I was amazed by the kindness and enthusiasm people shared as they walked by,” notes Michelle Kumata, a visual artist who contributed a series of Nihonmachi portraits to a mural on the custom framing shop Artform on Main Street. “It was powerful to see how art can bring us together and help us heal.”

Kumata says that seeing the boarded-up shop and gallery KOBO at Higo was reminiscent of when the original Higo variety store was shuttered after Japanese Americans were forcibly incarcerated during World War II. Her portraits depict Japanese Americans before the war, when historic Nihonmachi, or Japantown, thrived. The piece, a collaboration with Christa Thomas, is framed by a Japanese textile pattern modeled after snakeskin, which represents renewal and rebirth, and honors the families who lost everything only to face racism upon their return.

“It’s crucial to provide space and means for oppressed and underrepresented voices to express themselves and share their stories and perspectives. And we all need to listen actively and with our hearts,” says Kumata.

Back on King Street, messages of solidarity appeared everywhere. A black and yellow mural on the landmark restaurant Tai Tung features film star Bruce Lee and basketball legend Kareem Abdul-Jabbar encircled by a dragon. The artists Partrick “Dozfy” Nguyen and Shara Lee knew that Bruce Lee’s favorite restaurant in the city was Tai Tung and decided that painting the two icons together would be a fitting representation of marginalized groups unifying during this time. Both figures, who were good friends and appeared together in the incomplete martial arts film “Game of Death,” overcame cultural barriers in their respective fields to achieve greatness.

“When someone walks by the piece, a moment of pause is the greatest thing I can hope for,” says Dozfy. “I’d like them to ask themselves: ‘Why would this be important to the artist, to the business, or to the community?’ If you can touch the audience, then you’ve done your job as a visual artist.”

A longtime artist, Dozfy, is responsible for 60+ murals across the city and says that collaborative work has taught him the value of empathy, listening, and the emotional components of art and creativity. While some murals were completed by solo artists, most of the pieces were created by teams of people.

“This process had a familial quality. There was never any attitude. ‘Do you need me to hold the ladder?’ ‘Sure, I’ll hold the ladder for you,’” describes Sun. Art “acts as a window and a conduit for a lot of different emotions and things that we’re all trying to process and by the action of making art, for me personally, it’s a healing practice… I’ve never been in a time, and I know that no one has been in a time, when there’s just so much on the line every day.”

Christina Nguyen, who looks back fondly on her experience working with Hilario, says she prefers to make art in the company of others. For her, much of the joy in creating the mural came from trading ideas and building upon each other’s visions. Though each went into the project for Ping’s Dumpling House with no expectations and a shared approach of “winging it,” the pair was able to brainstorm with Ping to complete their composition of an ox, a dragon, a fish, and a chicken with a dumpling in its mouth. Ping would bring out dumplings for the artists each day to eat while they worked. She also asked them to include a message on the mural to offer free meals to anyone struggling.

So why does so much beautiful art come out of difficult times? Take a walk through the CID to find out. This neighborhood is constantly under threat for simply existing, but has prevailed because of a shared history of creativity and community, the evidence of which can be found where the paved streets have cracked to reveal cobblestone, or in the stroke of a paintbrush, or in the taste of a family dumpling recipe, or in the conviction of the people who call this place their home.

“People should know how special this neighborhood is and how important it is, has been, and will be to many generations,” says Nguyen. “Being a part of a family with a refugee background, we’re all like alchemists. I want people to see how we can make do with nothing and turn it into something. That’s ultimate resilience.”