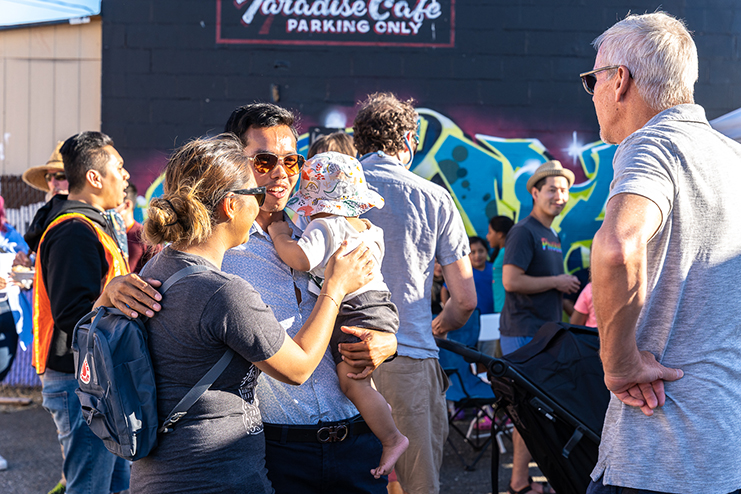 “Our hope is to spark efforts to build a community-led economy, to sustain and grow existing and new BIPOC entrepreneurship in the central core, to support youth entrepreneurs and their ideas of building an inclusive local economy,” Shor-Wong said.

The idea and planning for the event began in April of this year, and Shor-Wong also acknowledged how the White Center community lacks a city government and infrastructure to provide its community more support.

“Because we are an unincorporated area, White Center community has been historically and disproportionately impacted by COVID and pre-COVID forces of gentrification and marginalization,” Shor-Wong said. In the ongoing pressures of displacement and gentrification faced by many – our black, indigenous, 1st, 2nd and 3rd generation immigrant and refugee community members need to hold, honor, occupy spaces in the central core.

A live mural painting project also took place during the event at the legacy business store front of Huong Xua Deli that was closed due to the impact of the rash of fires in 2021. Kevin Bui, owner of the deli and artist Craig Cundiff with support from the WCCDA are supporting this work.

“White Center’s Affordability of housing and commercial spaces is decreasing, land use and zoning policy is changing to support new development and density, and lease agreements feel more strained and difficult to negotiate,” Shor-Wong said. “These are just a few factors impacting the landscape of who gets to stay, who gets to come in and who in the end will be able to call White Center home.”

All photos by Ronnie Estoque.

Ronnie Estoque is a South Seattle-based freelance photographer and videographer. You can keep up with his work by checking out his website.