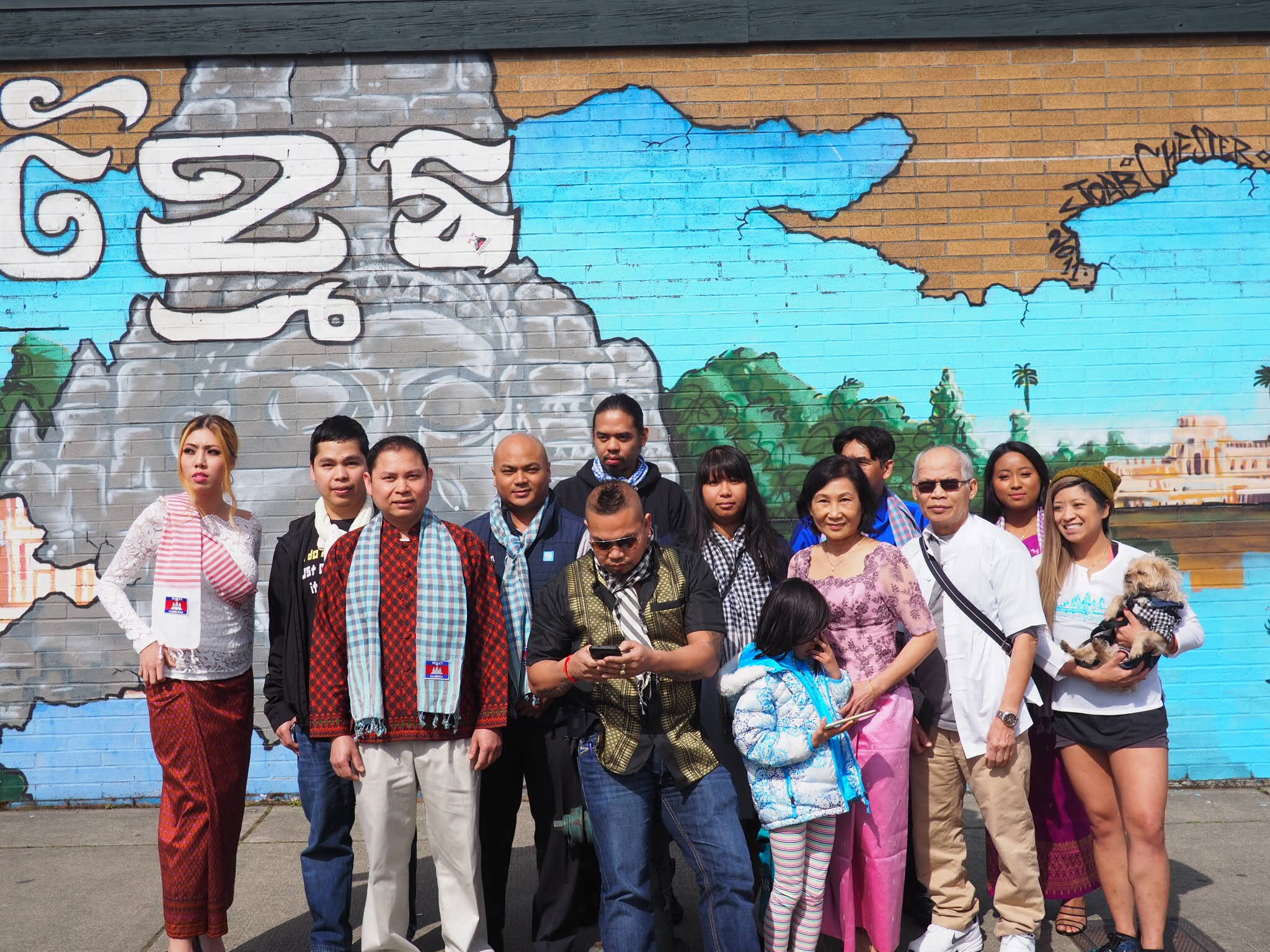 In one corner, the Cambodian Cultural Alliance of Washington is holding a planning session for their Annual White Center Cambodian New Year Street Festival. They’re discussing the theme of the event which is going into its 16th year.

“We want to get people to wear their Khmer clothes, so we can show the community there are Cambodians here,” says Pharin Kong. He floats an idea, “’Welcome to My Village’… that will get people to dress up because they will represent their village [from Cambodia].”

The street festival draws hundreds, not only from the Seattle area but from other Cambodian American communities such as Tacoma, Olympia and Everett. In past years, it has featured cooking competitions, eating contests, live music and dance, and martial arts demonstrations.

In an opposite corner of the bakery is another group of Cambodian Americans, mostly adults who came to the United States as part of the 1980’s wave of refugees escaping the Cambodian Genocide. They are talking current events in Cambodia, and it’s especially rowdy. It’s election season in Cambodia, and this period of time has historically been accompanied by political turmoil.

White Center is one of the largest enclaves of refugees of Cambodian descent in Washington state, with a majority arriving during the 1980’s after escaping from the fallout of U.S. involvement in Southeast Asia. Many found their way to White Center and settled in housing projects administered by King County. This development was named Park Lake Homes. In the early 2000s, they were torn down and rebuilt into a mixed income development and renamed Greenbridge.

Some in the community managed to open businesses in the nearby retail core, with Golden House Bakery being one of the later opening in 2005.

Oeuy Mak arrived in the United States as an adult in 1984. He’s a regular at the bakery and is part of the planning committee of the event. “I don’t remember…?” He says when asked how long he has been going to Golden House Bakery.

In lieu of a community center for and by Cambodian Americans, Golden House has become a social space for the community. “It’s a place to meet and congregate, for Khmer people. There’s no other place like it [for the community],” says Mak.

Golden House’s identity as a community space is not by accident. Bunthy Thoeun and Pharin Kong are the owners of Golden House Bakery, having bought out another Cambodian American community member, with a vision to help build community.

“My husband is the one who wants it for community. He wanted a place where he can gather his group, have meetings,” says Thoeun.

Pharin Kong has been a long-time resident of White Center, but his wife, Bunthy Thoeun, is a more recent immigrant from Cambodia’s Kandal province, which is 30 minutes outside of the capital Phnom Penh. She came to the U.S. in 2001. Her first job was an assembly line job which is how many Cambodian Americans are employed.

“When I got here, no English at all, I got lucky that they hired me,” she says.
In 2005, the pair purchased the business from another Khmer community member. “It was named Garden Donuts… before it was just donuts and coffee, we added Cambodian Rice Soup, sandwiches, Khmer BBQ skewers, bubble tea,” says Thoeun.

Throughout the day, many customers come in and are welcomed by their first name, highlighting the relationship Thoeun and Kong have built with the residents of White Center. They even admit that they on occasion help those that need help. Thoeun says about giving food away, “It’s hard for me to say no, it’s really tough, because where I come from is really tough, too.”

“I come here because a lot of younger generation people need our experience to know the right [Khmer] way when doing things,” said Mak, who is from an older generation, about why he attends CCAW planning meetings.

Each year, he writes poetry based on what new year zodiac sign it is for the street festival which is then read by a community member. “I’m not sure how long I’ve been doing it. I have enough for a book. I never read it though, maybe once. Someone else does.”

The 16th Annual White Center Cambodian Street Fair takes place on Saturday April 28, 2018, and starts at 10:00 AM. The event is located on SW 98th St. between 15th and 16th Avenue. The event is free and open to the public of all ages.