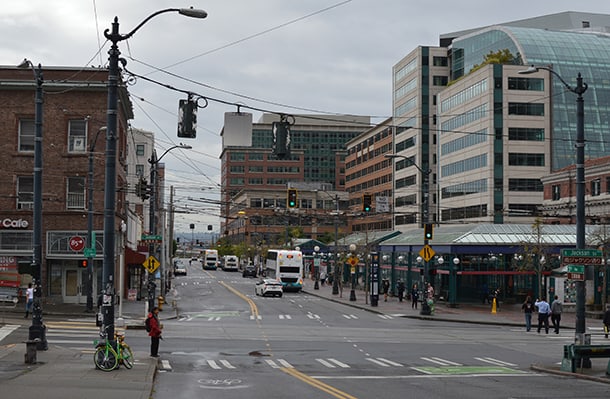 Note: This piece has been updated since it was published with additional information about the preferences of neighborhood stakeholders, and to clarify that projected project costs are still estimates

As the Seattle area grows its light rail network, Sound Transit and neighborhood stakeholders are deciding where to place a second light rail station in the Chinatown International District. In the future, the two stations will form a major transfer hub for rail lines from Bellevue, West Seattle and Ballard.

Some CID neighborhood leaders want the station built under 4th Avenue, to minimize negative construction and traffic impacts in the neighborhood. According to Sound Transit’s analysis, that location would come with significant engineering challenges, a price tag possibly hundreds of millions of dollars higher than building on 5th Avenue, and no certain way to pay for some of the added costs — though Sound Transit notes that projected costs for the project are just estimates, and aren’t settled yet.

But Sound Transit is still considering two possible locations for the station on 4th Avenue, as well as three on 5th Avenue. The five options are:

The 4th Avenue options are estimated to cost hundreds of millions of dollars more than the representative project because of additional construction costs. For example, building the shallower station under 4th Avenue would require displacing properties on 4th and relocating or demolishing the King County administration building. Both 4th Avenue options would require demolishing and rebuilding the 4th Avenue viaduct, and temporarily diverting the 33 thousand vehicles that traverse the viaduct every day. After an initial analysis of options for the station, Sound Transit designated the two 4th Avenue options (as well as the mined station option under 5th Avenue) as “alternatives with greater challenges.” Meanwhile, the 5th Avenue options (with the exception of the mined station), were considered “alternatives with more potential.”

Despite the challenges, no options will be ruled out until after Sound Transit’s multi-layered process of analysis and community engagement comes to a close. The final location of the station will be decided in spring 2019, after three levels of public review and screenings by an advisory group of neighborhood stakeholders, a separate group of elected officials, and the Sound Transit Board.

The letter notes that while the cut and cover stations under 5th Avenue options are “quite favorable from a financial-only standpoint,” they don’t do enough to connect the Pioneer Square and CID neighborhoods. “Historically, the negative impact of projects routed through our neighborhoods has been ignored,” the letter adds.

Maiko Winkler-Chin, executive director of the Seattle Chinatown International District Preservation and Development Authority (SCIDpda) and a member of the stakeholder advisory group for the project, favors building the station on 4th Avenue to minimize construction and traffic impacts on businesses. The neighborhood recently experienced these disruptions when the First Hill streetcar was built.

“The streetcar was rough,” Winkler-Chin said. “I think the city used to say that it was just going to be a paving project.” But it was worse: Restaurants had their water or electricity cut off without warning, and businesses were affected by street and sidewalk closures, causing sales to drop.

Another reason Winkler-Chin favors building on 4th Avenue is the potential to combine building the station with rebuilding the 4th Avenue viaduct. More than 100 years old, the structure will eventually need replacing, something that would likely also disrupt the neighborhood.

But according to Ron Endlich, Project Manager at Sound Transit, replacing the 4th Avenue viaduct is not a priority for the Seattle Department of Transportation within the next 10 to 20 years — nor does the agency have the money. Whether the City would be prepared to partner with Sound Transit on rebuilding the viaduct, is “an uncertainty,” according to Leda Chahim, community relations specialist with Sound Transit. “We’re just not sure that’s where they are.”

Winkler-Chin and Reason of Sound Transit both note that it’s too early to say definitively how much the different options would cost, because Sound Transit is still determining the final route for much of the Ballard and West Seattle extension. “We can have a conversation about estimated cost factors when we have more information and better understand what this all looks like, but I don’t think we’re at that point yet,” Winkler-Chin wrote in an email. “And saving costs for the system on the backs of this neighborhood can’t be my position.”

At a design showcase for the station that he attended in late July, ICHS Foundation Director Ron Chew heard a clear preference from neighborhood stakeholders for the 4th Avenue options. Like Winkler Chin, Chew worries about construction impacts.

“The community is saying no, we don’t want 5th Avenue, leave 5th Avenue alone, go over to 4th Avenue, because you’re screwing up a lot of development that’s already just happened, and then you’re gonna disrupt shoppers and residents who live in that new Publix hotel structure and so forth — just literally wall off the district,” he said.

Another benefit Chew sees in building a station on 4th Avenue, is that it would further connect Union Station and King Street Station.

There’s a long history of transportation projects disrupting Chinatown-ID, Chew notes, that goes back far further than the streetcar. The 2nd Avenue extension, which ends at Union Station and King Street Station, was designed at an odd angle to signal that the area was a transit destination. Constructing the extension in the 1920s destroyed much of Chinatown, which at that time was centered on 2nd and Washington Street.

“You built the 2nd Avenue extension and you tore down Chinatown — now you’re looking at doing this thing and impacting the new Chinatown-ID,” Chew said. “So if you have some sense of history, you’ll realize that the impact of what you’re doing has some implications in terms of the issue of equity.”

As for the cost overruns, Chew says: “If it costs more, well what about the cost to the community?”

Chew added: “Much like the Space Needle was built as Seattle World Fair, if the city is willing to invest dollars in doing something more grand, do it here as a way to help showcase an important historic neighborhood.”

Tomio Moriguchi, former CEO and chair of Uwajimaya, also favors building the station under 4th Avenue, because it’s closer to Pioneer Square and because “Fifth Avenue is already pretty congested.” But most of all, Moriguchi favors getting the project done smoothly. “If Seattle boasts to be a world-class city, our public transportation really needs work, fast and soon,” he said. “Sure, there’s always initial pain, but in the long run something like this is long overdue.”

Sound Transit may narrow down the options after its Board meets on October 25, to discuss the Level 2 recommendations from the stakeholder advisory group, and those from a group of elected leaders. After this, it will be time for a third round of analysis of the remaining options, including more public review and screening from the advisory groups, before settling on a final place for the station in 2019. Design of the West Seattle and Ballard extension — and the new Chinatown-ID station — will begin in 2023, and construction will begin in 2027.