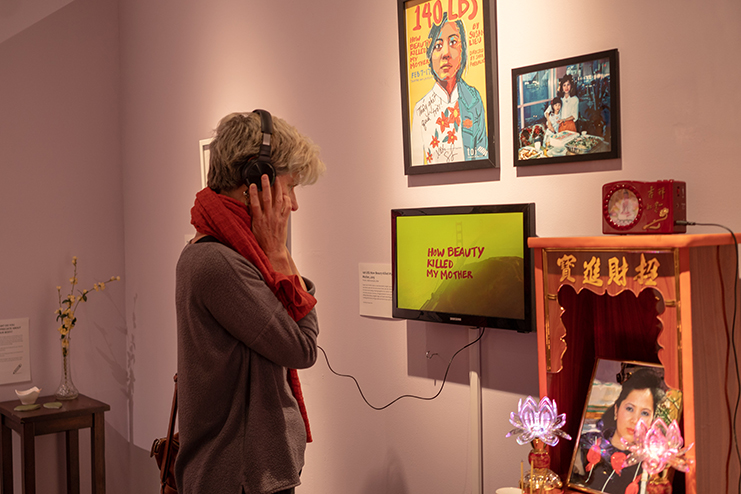 On October 10, 2019, The Wing Luke Museum of The Asian Pacific American Experience opened a new gallery exhibit called Where Beauty Lies. The name of the exhibit gets its origins from this poignant question: where does beauty lie? In the opening ceremony of the exhibit, Aleksa Manila, the emcee of the reception and one of the artists featured in the exhibit (who has also been recognized for her work in the community, social justice and modeling spheres) asked the audience where they believe beauty lies. Does beauty lie in colorism? Does it lie in queerness? How we answer this question fundamentally shapes the present and future stasis of beauty and how it relates to all of us, including our ancestors and our descendants whom we’ll be the ancestors of.

The intergenerational aspect of beauty is interwoven throughout the entire exhibit, curated by the Wing Luke Museum’s exhibit developer, Mikala Woodward. At the entrance, photography portraits by Auriza Ugalino focus on Asian Americans wearing articles of clothing they find beautiful. Kevin Ninh, creator of his YouTube channel, Flawless Kevin, is shown wearing an áo dài and a matching hat. Within the exhibit’s texts, Ninh speaks about how he watched his sisters get married in an áo dài and how he also envisioned that he would get married in the traditional Vietnamese garment. It is only fitting that Ninh’s version of beauty matches his YouTube outro phrase, “To be flawless is to only be yourself.” In addition to Ninh, several other Asian American media makers are also shown in the exhibit, including the music video Us by Ruby Ibarra, a Filipino American rapper, producer and spoken word artist, which showcases both present-day attire and traditional Filipino garments alongside Ibarra’s sharp lyrics in both English and Tagalog: “Island woman rise, walang makakatigil [nothing can stop you] / Brown, brown woman, rise, alamin ang yung ugat [learn your roots] / They got nothin’ on us!”

This unapologetic and multi-faceted pride of the Asian American experience is also reflected in a gallery video by Cut, a storytelling YouTube channel. Their video, called 100 Years of Beauty: Asian Pacific America (Jenny), shows one of Seattle’s local burlesque performers Jenny Ku, AKA The Shanghai Pearl, and her various looks throughout the decades. “We wanted to show all of her different sides from her rave phase to the ‘90s.” said producer Marina Taylor and researcher Christopher Chan at the gallery’s reception. Alongside this centerpiece video bordered by red velvet movie curtains, exhibit visitors can view all of Cut’s 100 Years of Beauty series videos that present Asian beauty looks throughout the decades, from hair, to make-up, to the historical issues that influenced those very looks.

While the gallery whole-heartedly celebrates Asian beauty in all of its expressions, Where Beauty Lies also doesn’t shy away from sharing the dark side of beauty and its impact on the Asian American community.

In a video segment of 140 LBS: How Beauty Killed My Mother, an autobiographical solo show performed by Susan Lieu and produced by local playwright Sara Porkalob, Lieu shares anecdotes of instances her mother questioned her own beauty as a Vietnamese woman and in turn projecting her own internalized beauty ideals onto her daughter. Lieu’s mother dies while going through a cosmetic stomach operation and the effects of her death echo through Lieu’s words, and in the lilac and pink-illuminated floral shrine with Lieu’s mother’s portrait in a wooden frame lettered in gold, surrounded by the reverberation of a Buddha radio on top.

Where Beauty Lies brings to light the ebbs and flows of what beauty means. It can be something as painful and necessary as unpacking light-skinned privilege and the lack of Asian American representation throughout Hollywood’s history as seen in the gallery’s many film posters. It can also be as awe-inspiring and breathtakingly invitational as Bah Toh hair and flower shop’s Bobbie Yanoupeth’s photo-worthy floral arrangement around a golden Buddha statue. Or it can be something as simple as a new question to answer Where Beauty Lies, such as one of the exhibit’s mural prompts, “What do you appreciate about your body?”

What happens when we start asking ourselves those questions about where we want to witness beauty growing and thriving, and ultimately, have new answers to Where Beauty Lies.