Trinity Parish Episcopal Church is a fitting venue for a performance of Uncle Gunjiro’s Girlfriend by First Voice Productions, a collaborative organization that creates and produces original multi-disciplinary work. This is the very church where Gunjiro Aoki married his girlfriend, Helen Gladys Emory, back in 1909. It was probably the first official wedding of a Japanese man and a white woman in the United States, and was an extremely controversial and explosive event for the American public at that time, a scandal that had a huge impact on both sides of the family. The history and circumstances surrounding the marriage and the discovery of this story are the subjects of this piece by Brenda Wong Aoki, a San Francisco Bay Area actress and storyteller, and Mark Izu, her musician husband, who are the principals of First Voice. Gunjiro was the grand uncle of Aoki, and to be performing her piece in the very church where this wedding took place is a very emotional matter for her.

In thinking about her own family history, Aoki says that a sense of shame had hung over them, that there was something hidden in their background that no one would talk about. Visiting her 103 year old grand aunt, Sadae Takezawa, in Sacramento was the key to unlocking the story. Sadae had vowed that she would tell the tale before she died and when Brenda showed up, she revealed the secret behind the shame. It was the forbidden love of Gunjiro for Helen, the daughter of a San Francisco Episcopal bishop, that precipitated the chain of events that proved to be such a disaster for the families, both the bride’s and the groom’s.

In 1897, Gunjiro had come with his brothers, Jitsuji and Chojiro (Brenda’s grandfather) and sister Sadae to San Francisco and he became a disciple of Archibishop Emery of the Episcopal Church. He met Emery’s daughter Helen and they fell in love. Once he had decided to marry her, he would allow nothing to stand in the way of their union. Driven out of San Francisco, beset by angry lynch mobs in Eugene, Portland, and Tacoma, Oregon, the couple reached Seattle where the mayor, who was a Socialist, noting that Gunjiro was also a Socialist, allowed the wedding to proceed, and so they were married in this church.

It led to the expulsion of Brenda’s grandfather Chojiro Peter Aoki from his position as head of the Japanese Mission on Pine Street in San Francisco. He was forced to move to Utah to convert Mormons, and he ended up a sharecropper. Helen’s father resigned from his position in the church and divorced his wife, who staunchly supported her daughter’s decision. She accompanied Helen and Gunjiro as they traveled up the coast to find someone who would marry them, and she lived with them for the rest of her life.

The ultimate tragic turn occurred when Gunjiro was expelled from the family home by his angry eldest son who claimed that Gunjiro had been nothing but trouble for the family. Gunjiro died a year later, alone. The family then changed its name to Oakie, and lived as whites. Helen, who was forced to give up her American citizenship because of her marriage to Gunjiro, became a citizen again through a court order. 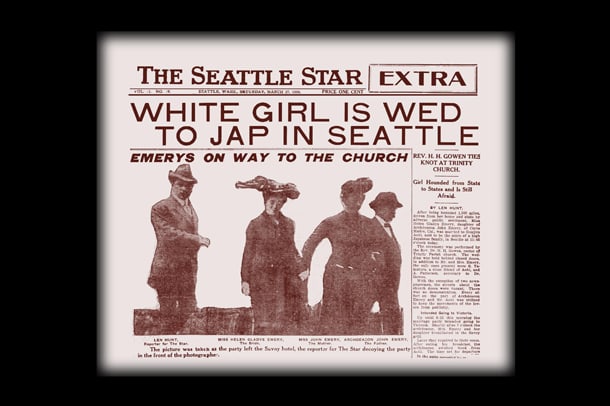 This story gradually came together for Aoki through much research into archives and especially newspapers. Anti Chinese and Japanese feelings were being whipped up by politicians and the press on the West Coast, and Gunjiro and Helen were headline news up and down the coast: This, in The Seattle Star: “White Girl is Wed to Jap in Seattle-Girl is Hounded from State To State and Is Still Afraid,” and The New York Times: “Archdeacon Emery Resigns, Criticism of His Daughter’s Marriage to Japanese the Cause.” The ultimate horror, according to the articles, was the “mongrelizing” of the races by unions between whites and non-whites, which would produce monstrous children. When their first child was born in 1910, the newspaper San Francisco Call said: “The combination is startling. There seems to be some sort of a misfit, some horrible blunder. The face, neither yellow nor white.”

Aoki’s performance mixes two major threads. First is the story of Gunjiro and Helen, and second, Aoki’s journey of discovery. With help from Japanese scholars, she found that she could trace her samurai ancestry back several centuries, and learned that as Christians in Japan, they were regarded with some suspicion. Coming to America was an option they chose to continue to practice their religion and for Gunjiro to continue his Christian studies.

This family’s tragedy serves to highlight the state of race relations between Asians and whites a hundred years ago on the West Coast. The issue of race was always there for officials and newspapers to keep at the ready for fomenting public outcries, for creating headlines and publicity, the “yellow peril” that threatened the white man. Over the years restrictive legislation continued to be passed to isolate Asian immigrants. After cutting off immigration, laws were passed to forbid marriages between whites and Asians, naturalization was barred, and Asians could no longer own land and property. These anti-Asian currents culminated in the expulsion of all persons of Japanese ancestry to concentration camps during WW II. Interestingly, Gunjiro’s family who now called themselves the Oakies, retreated to the countryside, passing themselves off as native Americans to escape incarceration. Aoki’s family also dodged the camps because they lived in Utah which was outside the restricted military zones set up on the West Coast for the removal of American Japanese.

Aoki says that the story continues to evolve. She is herself of mixed Chinese, Japanese, Spanish, and Scottish descent, and her performances have drawn together the many disparate parts of the family. At the premiere of her piece at San Francisco’s Yerba Buena Center for the Arts in October 1998, a large group of family members, both Aokis and Oakies, gathered to meet one another, many for the first time, and some also learning about the family history for the first time. The shame has turned into pride and they are embracing the many elements that comprise this amazing family history. In Seattle, she will once again tell the tale, accompanied by her musician husband, Mark Izu, at Trinity Episcopal Church, on Wednesday, August 12.

‘Uncle Gunjiro’s Girlfriend’ plays only one night on Wednesday August 12 at 7:30 p.m. with a Q&A with the performers to follow. Tickets available through Brown Paper Tickets. Trinity Parish Church is at 609 Eighth Ave. For more information, call (206) 624-5337.