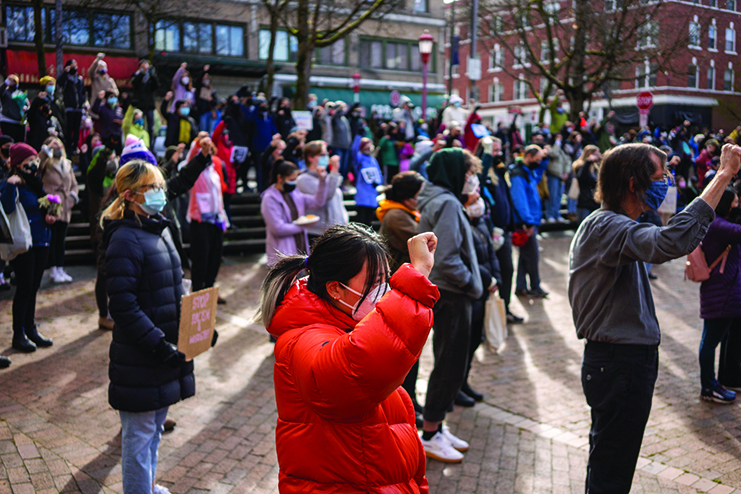 As the nation is struggling to recover from a tumultuous year of the coronavirus, a summer of social unrest, and a contentious election — the Asian American and Pacific Islander (AAPI) community is gearing up for yet another battle.

While gearing up for yet another battle. While the nefarious adversary is a familiar foe, the “rules of engagement” have led to a more deathly development.

Amid the rise in anti-Asian rhetoric that has led to a spike in racially based assaults against the AAPI community nationwide, a recent unconscionable act of violence has left eight people dead in Atlanta, GA (among those — six Asian women).

Shot dead by a white male.

In response, local officials around the country vow to take action by implementing new safety procedures and increasing the amount of police patrol in predominantly AAPI enclaves, However, this only heightens the anxiety since more police presence rarely means that the community is a safer place.

Simply mandating policies is not enough — prevention, implementation and accountability are essential. Laws alone will never inspire a genuinely just society. Only addressing the deeper issues that plague our community and hearts can do that.

And while this senseless act of violence is egregious and appalling, should any of us truly be surprised by the escalation of violence while accounting for our own indifference to America’s longstanding history of perpetually finding a scapegoat for all our fears and failures?

In this pivotal moment of transition, as traditional ways of living are being challenged, deep-seated fears have emerged of loss of status and privilege. Radical ideologies spewed by white supremacists and politicians alike act as a guiding light to those who have underachieved in life as to where to direct blame for their anger and insecurities — inviolent and irrational ways.

As witnessed during the Chinese Exclusion Act of 1882, which was one of the first ethnic based immigration laws of our county, and the WWII Japanese Internment Camps, in which multitudes of American citizens were incarcerated solely based on their heritage, the AAPI community has been all too familiar with being the targets of these unwarranted notions.

Take Texas representative Chip Roy’s statement in the wake of the Atlanta shooting, for instance. By exploiting a U.S. House Judiciary Committee hearing on rising anti-Asian violence to instead voice his frustration with Black Lives Matter protest for equality, rather than showing concern and respect to those AAPI’s who have been harmed, he illustrates just how much this disillusion rhetoric continues to divide us. And by reawakening shameful and outdated lynching speech to drive home his points, he further exposes just how far into our politics this hate has infiltrated. Or could it be that this deep-rooted hate has always existed and just now becoming more visible?

And though it is clear that a majority of the recent attacks against the AAPI community have been racially motivated, we cannot ignore that this deep tragedy has highlighted the deep complexities of intersectional hate and oppression that across establish lines of race, gender, sexual orientation and class — resulting in the continuous marginalization of women, gender non-conforming, LGBTQQA+, and immigrants of our community.

The fact that during the Cherokee County Sheriff’s Department press briefing, spokesperson Captain Jay Baker would rationalize the shooters actions as a case of having a “bad day” or giving credibility to the theory that somehow this has something to do with a “sexual addiction” and that he was eliminating “temptation” is not only disrespectful, hurtful, and ignorant — it demonstrates just how callous the criminal justice system is towards underserved immigrant communities — in particular, Asian women.

By centering the voice of the shooter, Captain Jay Baker breathed life into a narrative that somehow the victims were at fault. That they could have potentially been “illegal” sex workers who did not deserve to live, let alone be protected. And essentially perpetuates a culture that fetishizes Asian women as hyper-sexual beings.

These harmful sexualized myths have been constructed to justify the violence social control used to maintain racially gendered hierarchies in which Asian women have paradoxically been vilified AND prized.

Yet as some excuse, Representative Roy and Captain Baker’s comments as unintentional or misguided, or even dismissed them as harmful banter, I beg to differ. Because nothing is more intentional than hate. And nothing can be more harmful than our deliberate disregard for their self serving willful ignorance.

And though it is obvious that hateful rhetoric from both white supremacist and figures like Chip Roy and Jay Baker are dangerous, they alone are not the problem. Our communities’ historical indifference to discrimination that has not directly impacted us has allowed this hate to fester and mutate to attack shifting realities and created the conditions in which the marginalized are left even more vulnerable. For that, we all have blood on our hands.

For too long we have stood by silently, ashamed of the status quo, yet too afraid to challenge it. And are refusing refusal to stand up to discrimination makes cowards of us all.

As a cisgender heterosexual man who has been privileged and benefits from a patriarchal society, I recognize our failures in supporting the work and needs of families in our community who have been the target of some of the most vicious attacks. My response has to be better. Our response has to be better. Because as long as we were able to separate ourselves from others in our community and view them as lesser than, the easier it is for a conscience to bear the brutality of a current reality. And that is a cop out.

A day after the Atlanta shooting, I was reminded that I should call to check on my best friend — my sister. She’s tiny in stature but what she lacks in size she makes up for in her resiliency and fighting spirit. So the anguish and despair I heard in her voice broke my heart. As an Asian-American, who knows what she was going through that day? Heck, I didn’t even know what I was going through.

During a later call, in an attempt to cheer her up, I made some jokes. However, I could tell she was only laughing to appease me. When the awkwardness subsided and I gave into the fact that I’m just not good at this crap, I asked her what I could do to make her feel better. That’s what you do for people you love, right? Her answer was simple, yet prolific.

“Check in more and ask questions.”

Wow. With just one sentence, she inspired change.

Within these prison walls where I am a current occupant of cell C137L, my fellow colleagues and I — across all ethnicities, gender, classes and orientations — have agreed to begin initiating discussions among our peers in the how we can improve the ways we show up for our community, and we will be having constructive dialogue allow for true partnership equitable changes for all. That begins by challenging toxic masculinity, having tough meaningful conversations, and learning from those most impacted by asking questions and listening intently.

Now THAT is what you do for the people you love.

And though grief is sometimes a wound that never heals we cannot allow our grief to paralyze us. Because each recent incident of tragedy represents a discerning revelation about who we are as a people — just as the moments of resistance against them will reveal something about who we aspire to be.

Felix Sitthivong #354579 is an organizer and advisor for the Asian Pacific Islander Cultural Awareness Group (APICAG). He served as chapter president at Clallam Bay Corrections Center between 2015 to 2019 before being transferred and uprooted due to allegations of organizing a food/work strike to protest the discrimination of prisoners within the Washington State Department of Corrections. He is credited with designing an Asian American Studies course, helping to found and co-create an Anti-Domestic Violence program and subsequent Intersectional Feminism 101 class. He has also organized and hosted multiple immigration, social justice, and youth outreach forums all available through the APICAG. He is currently serving 65 years at the Washington State Reformatory Unit in Monroe Washington for charges including murder, attempted murder, and first-degree assault. His earliest release date is August 31, 2073.