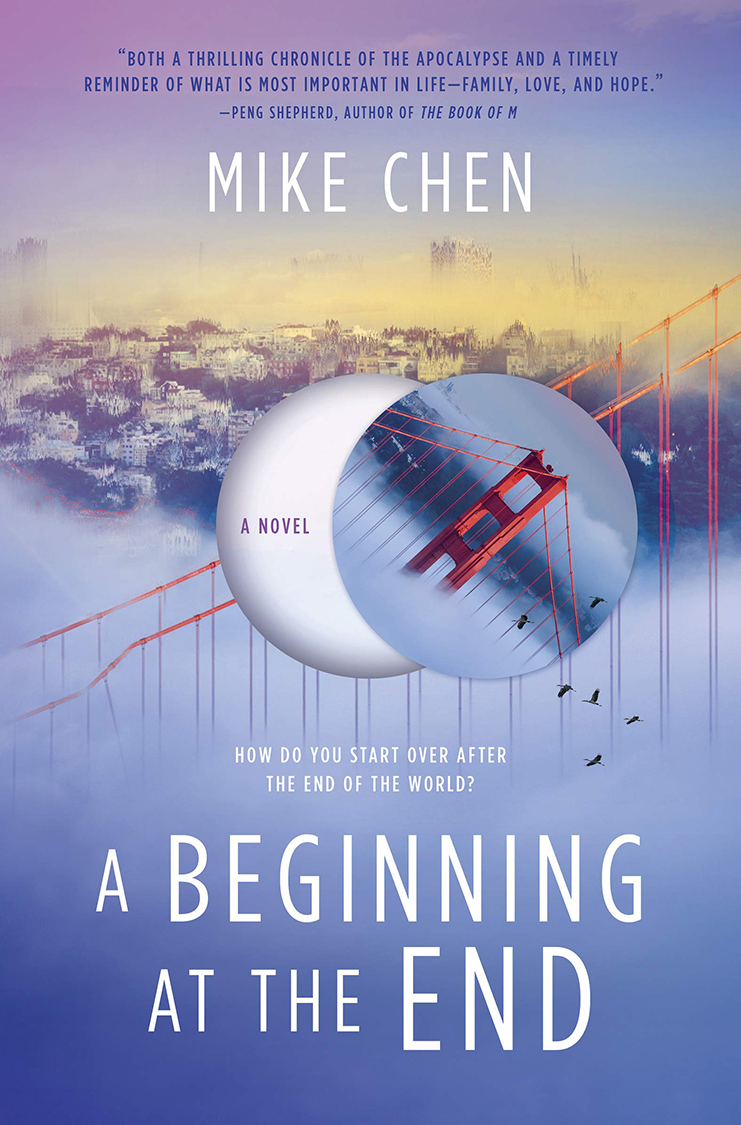 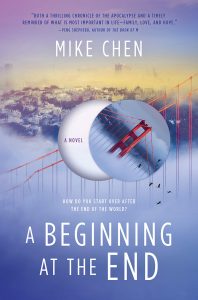 Earlier this summer, when I discovered the book, A Beginning at the End, by Bay Area Chinese American science fiction writer Mike Chen, I doubted my eyes. Wait, we are in a pandemic right now, how can someone already have published a fiction book about this experience?

Using an unknown future date, the author introduces us to a post pandemic time after 70% of the American population has been killed by a fast-moving deadly virus. The story focuses on a quartet of characters facing their Bay Area California world as survivors, “rebuilding the country, split between self-governing cities, hippie communes and wasteland gangs.”

Six years after the initial outbreak, a resurgence of the virus rears it aggressive head, throwing the nation into a new panic. One of the regional government authority’s tools for rebuilding society is protection of the family unit, and therein lies the crux of the book’s dramatic plot.

Six years after the initial viral outbreak, a young woman, Moira, attempts to erase her past as the world famous teen pop singer phenom Mojo, by hiding out with a nothing job and nothing fiancée in San Francisco. Upon the very day of the first pandemic outbreak, she had been performing in London in the clutches of her manipulative father/manager. Moira’s mother was a famous Iranian pianist and she died when Moira was young. Moira’s escape from London to San Francisco became the harrowing tale of undocumented travel on an underground trail of new friends, secret identities and life on farm communes until she high tails it to the Bay Area.

Meet Rob, the Hapa Japanese news media editor, who keeps the secret of his wife’s virus death from the couple’s sharp but emotional young daughter Sunny. He desperately tries to keep the authorities from removing his daughter from his care. And he enlists the scheming wedding planner Krista, who specializes in bringing couples, such as Moira and her fiancée, to the point of state sanctioned wedded bliss.

Moira is keen to keep these characters from discovering her true identity, until her father makes a public announcement, offering a huge reward for information that will help him reunite with his daughter Mojo (and her lucrative pop music career).

How the three adults escape from government regulations and evade police to cross borders and find the young daughter who bravely has made her way to Seattle, makes for an emotional and heart-tugging read. Although, of course, today’s readers also will worry about the bleak characterizations of a post-pandemic world with its quarantine areas, mask regulations, and determination to sanitize surfaces.

This is the second fiction book by the author Mike Chen. His previous book, Here and Now and Then was selected as a 2019 Goodreads Choice in “Best Sci Fi.” Over the years, he’s been a technical writer, and, at times, he wrote hockey news for mainstream sports media. Chen has contributed to geek websites such as Tor, The Portalist and The Mary Sue. Some of his critical posts cover Star Trek and Star Wars character studies and plots.

Chen was born in San Jose to Taiwanese and Chinese parents, a nurse and an engineer. He and his wife and child live in Palo Alto. Himself steeped in the ‘90s pop music world, he even identified a playlist for the various scenes and characters in the current book, available on his website. For example, the singer Moira’s theme music is “No Surprises” by Radiohead.

In a January 2020 post on AMA (Ask Me Anything), a massively popular subsection of the social media compendium news site Reddit, the author revealed many of his personal preferences and writing techniques. Inevitably, he was asked “how he knew about the current pandemic?” and what other future dramas does he know about? Easily, the answer to the first question is that he first began writing this prescient story in 2011 and finished the first draft in 2016. He says “it’s a bit disconcerting that a bunch of the things that I put in there are becoming real headlines.” But on the plus side, Chen suggests the book offers glimpses into how people reboot their lives after a pandemic.

As you might imagine, a number of inquiries on the AMA site asked for tips on how to become a successful writer (he answers, “just write and meet writers who can give you honest feedback”).

Or how to build a world within a science fiction novel without the description becoming too long and unwieldy. In response, Chen offered that the writer must create the writing from both “top down and bottom up.” Which means “top down requires broad strokes of why the world is that way and how it works,” he said. “And then looking from the bottom up, I try to walk a character through their day to day routine: communication, transportation, work, tasks, responsibilities.”

Chen even goes so far as to divulge how he named his book’s characters: by taking actual names from ‘90s indie rock musicians from the New England area, and mixing up the first and last names to make new ones.

From this reader’s perspective, A Beginning at the End was a pleasure to read, despite its dire setting. Chen writes women and children characters with sweetness and personal feeling, a trend that is much needed in the formerly traditional scifi landscape of male writers.