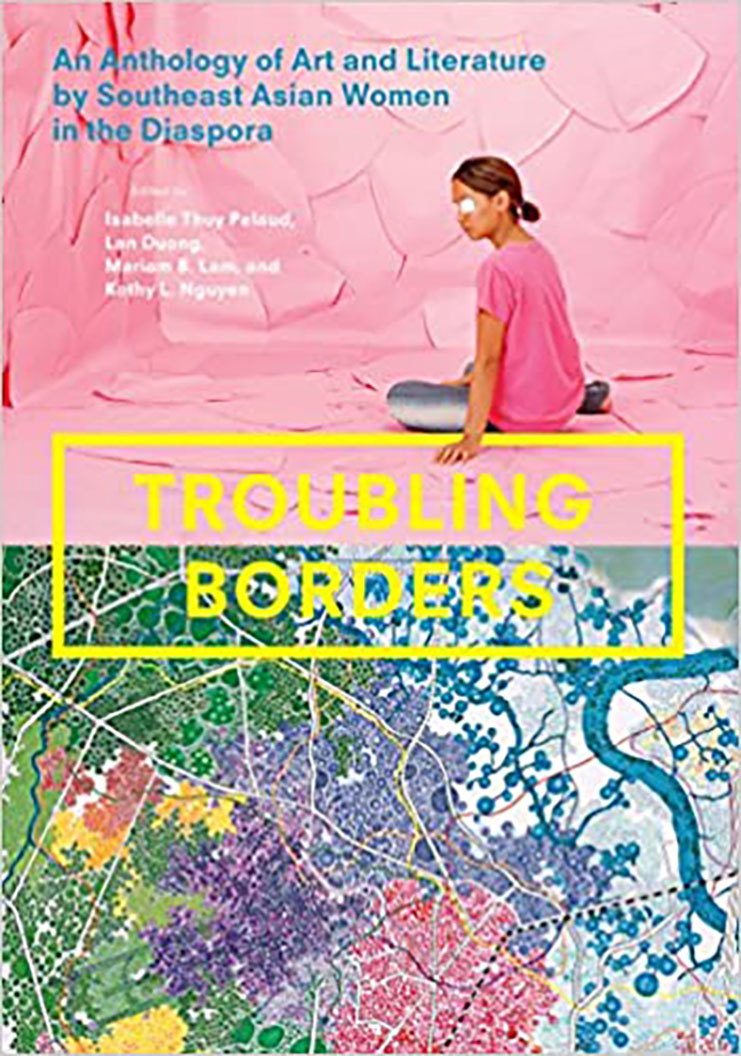 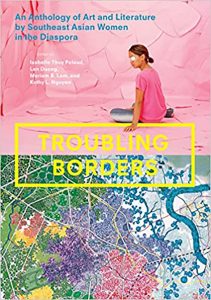 Troubling Borders: An Anthology of Art and Literature by Southeast Asian Women in the Diaspora is a collection of works from a mix of artistic disciplines – poetry, short fiction, painting, mixed media, and photography – compiled and edited by Isabelle Thuy Pelaud, Lan Duong, Mariam B. Lam and Kathy L. Nguyen. This book was published by the University of Washington Press in 2014, with a new paperback edition published in 2020.

In their Introduction, the editors explain their intentions for the direction of the book: “…women push the boundaries of their communities and beyond. Their vision also serves as a site of cultural memories marked with lingering pain, loss, and anger, often tracing back to foreign imperialist presence in their region of origin, making them vivid and vigilant critics of empire building.” They intersperse these works specifically to juxtapose, so that the pieces can be experienced in conversation with one another to lend commentary to the greater social issues concerning Southeast Asian women of the diaspora. The editors list the specific themes they primarily address in this book: “family relations in the diaspora; language, writing, and literacy; homes and homelands; love and sex; militarization; otherness and Asian America; race, roots, and religion; travel and narrative; and activism, resistance, and labor.”

In dividing the book according to social issue, the editors consciously avoided categorizing their sections by other, more conventional markers such as ethnicity, country of origin or diasporic host nation. This, they explain, is to “re-situate these writers and artists as both a diffuse global presence and individuals who carry with them world historical memory and global political lineages of great importance.” These artistic choices produce a collection that is at once scholarly yet accessible, purposely fragmented yet also deliberately interconnected, and always centering women in ways that surprise, challenge, and even provoke.

Larger in dimension than your typical trade paperback and printed on heavy gloss paper (presumably to bring out the luster in the visual art pieces woven throughout), this book felt substantial in my hands. With its striking prints and occasional pops of full-page, full-color spreads, it would be right at home in the gift shop of an art museum. I let that association guide me in how to read this book, and overall I’m pleased with the resulting experience. I approached each piece as one would stroll through an art museum: slowly, carefully and quietly, with reverence and from a place of deep thought. This is the pacing that I would recommend to others interested in reading the book. The subjects that dominate the anthology – violence, memories of war, racism, sexism – are not light fare by any means, and to try to sprint through more than a few pages of this book at a time is a recipe for mental and emotional exhaustion.

Some moments that stand out in my memory as especially vibrant gems are the lyrical, shape-shifting and women-empowering multiplicity of Barbara Jane Reyes’ poem, In the City, a New Congregation Finds Her, which uses the ghazal poetic form to stunningly evocative effect; Aimee Phan’s excerpt from The Reeducation of Cherry Truong, in which a mother and daughter struggle with their drastically different ideas of how best to survive a war-torn Vietnam; and Anida Yoeu Ali’s Palimpsest for Generation 1.5, a hybrid visual art installation and performance art piece in which the artist takes on the weight of all the gendered artifacts that a woman might wear and abandon over her lifetime – old cloth diapers, pieces of sarongs and 15 feet of hair.

This book delivers on the promise and premise of its title: Troubling Borders. With every piece, I was made to confront my own relationship with borders as a woman of the Philippine diaspora. I was reminded of ways that borders were drawn specifically to exile me and the women like me, which was distressing to revisit; but even more significantly, I was also faced with the possible ways that I have used borders to exile others. Azizah Ahmad’s poem, A Letter to Asian America, delivers staggering truth in the lines “My colonizers were not the Anglos that your studies have taught us to hate, but rather reflect / the face in your mirror,” to remind us that all borders are fluid – even the border serving as the fine line between the colonizer and the colonized.

This book pushes its reader to question the usefulness of our artificial and socially-constructed borders. In creating and adhering to these borders, have we lost out on other possibilities for connection? Is it time for us to finally trouble these borders? Maybe so, because goodness only knows how these borders have troubled us.