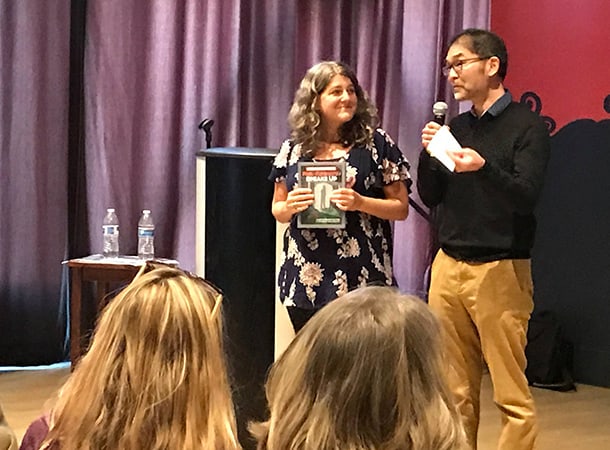 Stories have a way of changing when you tell them to someone new.

Stan Yogi was ten years old when he learned about what happened to his family during World War II. At the time, roller-skating, basketball, and piano lessons were his major concerns. Then he found out that his mother graduated from high school in Manzanar, a concentration camp in California. Decades later, it’s Yogi’s turn to introduce a new generation to this history. Fred Korematsu Speaks Up, written with Laura Atkins and illustrated by Yutaka Houlette, tells the story of a soft-spoken young man who found the courage to challenge Japanese American incarceration all the way to the U.S. Supreme Court.

Many of the roughly sixty people who came out to hear the authors speak at the Wing Luke Museum on October 28 could tell similar stories. But, as Atkins told the crowd, Karen Korematsu’s was different. At sixteen, Karen learned about the camps from a friend’s report for class. But when her friend mentioned Korematsu v. United States, the famous case of a young man who refused to comply with the exclusion orders, all the students turned to look at her. Back at home, her mother explained that the young man was her father, Fred. When he came home that night, Atkins related, he had just three things to tell his daughter: “It happened a long time ago. I was right. But I lost.” Four years later, the same thing happened to Karen’s brother, Ken.

Decades after redress, it is this stage of Korematsu’s life—when the lonely courage of his legal challenge had shaded into the quiet oblivion of his struggle to raise a family—that feels most devastating. Or perhaps it just seems that way to me as a father.

In any case, the book is full of details that readers of all ages will find informative and moving. One example shared by Yogi is a handwritten 1945 letter, reproduced in facsimile in the book. After learning of his defeat at the Supreme Court, Korematsu wrote to reassure Ernest Besig, his lawyer, that he and the American Civil Liberties Union had done everything they could. Not only did Korematsu express his gratitude, but he took the time to congratulate Besig on the birth of his daughter—a detail that, in Yogi’s words, “says so much about Fred as a human being.”

The combination of historical details with an episodic account of Korematsu’s life, gracefully narrated in short, free-verse poems, makes the book both accessible to younger readers and capable of holding their interest as they grow. Professor Lorraine Bannai, who shared research with Yogi and Atkins while writing a scholarly book on Korematsu, described the fact-checking process for a children’s book as more intense than that of academic publishing. Bannai, who directs Seattle University’s Fred Korematsu Center for Law and Equality, was a member of the legal team that successfully challenged Korematsu’s conviction in the 1980s by proving that the government suppressed evidence refuting its claims of a “military necessity” for the camps.

While public speaking did not come naturally to Korematsu, Bannai told the audience at the Wing Luke that he rallied himself to do it. “He loved speaking to students,” Yogi said, “and one of them was me!” Something about Yogi’s experience with Korematsu while he was a UCLA undergraduate, must have rubbed off, because Yogi and Atkins report having spoken to over 6,000 students, at schools including Seattle’s Dearborn Park Elementary and Bellevue’s Open Window School.

They know how to get kids’ attention, as well. “If you only had five days to pack up your belongings, what would you take?” Yogi asked at the Wing Luke reading. One first-grader, Amelia Mason-Smith, could barely believe it. “I would have packed something that made me feel brave, and my toothbrush, and something special, like a watch or bracelet,” she said afterwards. The authors also reported that students are usually “slack jawed” on seeing an image of the shared toilet stalls at California’s Tanforan detention facility in Miné Okubo’s graphic memoir, Citizen 13660. Contemplating the lack of privacy and the smells, my daughter Yuuna Tajiri, another first-grader, observed with disgust, “Tanforan was made for horses, not human beings.”

For Atkins, who found her connection to Korematsu through her family history of activism, the message for kids goes further. Sharing her own experiences with anti-nuclear and anti-apartheid protests in junior high, she advised: “When you speak up, sometimes adults pay attention, and it makes a difference.” The authors proudly told the story of Jana, Mona, and Batool, three young girls at Fred T. Korematsu Elementary School in Davis, California, who organized a fundraiser after their mosque was vandalized.

Yogi and Atkins took care to honor other children’s books about Japanese American incarceration, such as Baseball Saved Us, by Seattle’s own Ken Mochizuki. Like its predecessors, Fred Korematsu Speaks Up asks: What is the future of this history? Who is this story being told for now, and who will listen? For many people these days, the answer lies in activism that extends beyond the Japanese American community. Both Atkins and Mika Kurose Rothman, who spoke briefly at the event on behalf of the Seattle Japanese American Citizens League (JACL), celebrated the recent airport protests against the Trump administration’s Muslim ban. In telling his family history, Yogi revealed that his paternal grandfather would be considered an undocumented immigrant today—a story he makes sure to share with students when he visits schools.

After the reading, I strolled over to the BorderLands exhibition at King Street Station with my first-grade daughter and listened as she reflected on what she’d learned about the conditions of the camps, the actions of the government, and her late great-grandmother, who had been incarcerated at Poston, Arizona. Later that evening, before she went to bed, I found her quietly reciting a short poem she’d seen in the book, written by a young girl incarcerated at camp Topaz.