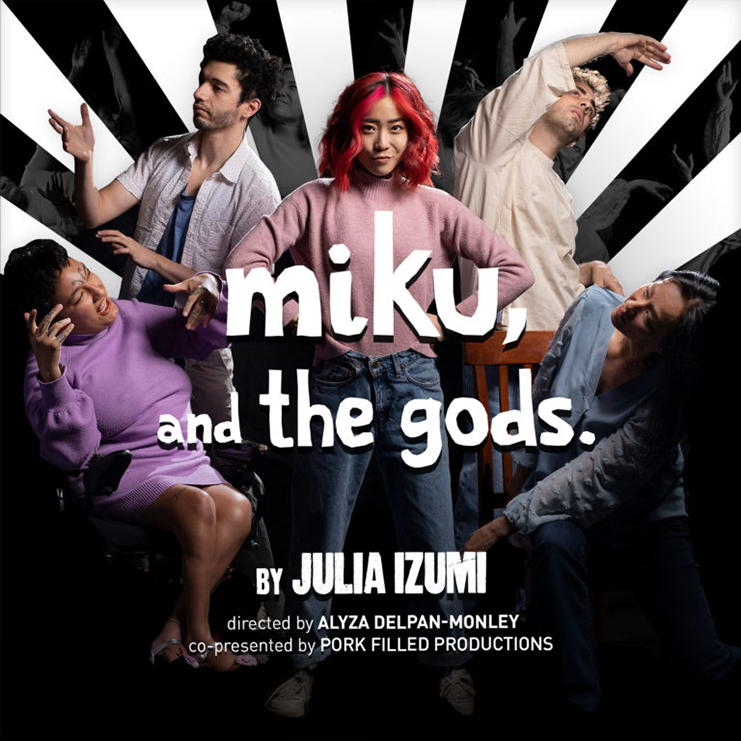 Who hasn’t wondered what it would be like to be a god? Playwright Julia Izumi puts those dreams to the test in the upcoming production of her play miku, and the gods. at ArtsWest, co-presented by Pork-Filled Productions.

Recent politics sparked this question for Izumi. “After the 2016 election, I thought a lot about how we often teach young people to aspire to power but we do not teach them how to responsibly handle power,” she observed. “So I thought – what if a child aspired to be the thing with the most power ever, a god?”

The play has been in development since 2018, including a staged reading here in Seattle. “The processes have looked different every time, especially since some of them had to be virtual due to the pandemic,” Izumi reported. “But I learn a lot every process through hearing the text read aloud.”

She particularly appreciates the contributions of the actors during this work. “It always feels different when said aloud by other actors than it does in my own head,” she said. “Playwriting is a funny medium because the goal is not to have our writing read, but experienced.”

Izumi’s love of theatre started early. “I don’t remember it, but when I was but years old, my mother took me to see a high school production of West Side Story that her friend’s daughter was in,” she said. “Supposedly I was riveted during the entire performance and the lady sitting on the other side of me recommended to my mom that she put me in a theatre class.”

She has been involved in theatre and performance since then. “It’s oddly the only thing that has maintained my interest throughout the years,” she mused. “I became a playwright because there weren’t a lot of roles that I could/wanted to play, so I wanted to write them.”

Unlike some playwrights, Izumi has participated heavily in the rehearsal and production process at ArtsWest. “I have actually been at all rehearsals for the production and will continue to be up through opening night,” she said. “Being here and being part of the process has given me a great chance to further edit the script, now understanding what it is for people to embody the characters on a stage.”

And when not immersed in writing and production, Izumi is also an educator. “I try to teach students that a play can be anything,” she relayed. “But more than having them take away an important lesson, my main priority when I teach is to give the students a space where they can feel comfortable expressing themselves through writing.”

For the show’s director, Alyza DelPan-Monley, thinking about the realm of the gods was evocative. “In rehearsal this week, we went around the room and each told one of our memories of the sky,” DelPan-Monley said. “Each person in the cast shared something in their life that was so heart-filled and specific, and it was a perfect reminder that we all have so many memories and experiences inside of the vessels that are us.”

In her direction of this production of miku, and the gods., DelPan-Monley is first striving to create a sense of community that the artistic team can then share with the audience. “I now know seven different people’s small, mundane and profound, personal experiences with the sky,” she said. “And it is those little knowings that can bring us together.”

From her first exploration of the script, DelPan-Monley found miku inspiring. “I remember sitting outside under a tree last summer, reading through the draft, feeling so connected to the characters, both the humans and gods,” she said. “Later that summer, I was at a beach, collecting rocks in a cave and staring at the ocean, and the show kept whispering back at me and feeling so necessary and relevant to the stories I want to be sharing and the ways I hope that we can learn to connect.”

That connection started long ago with the link between DelPan-Monley and playwright Julia Izumi. “Funny enough, Julia and I went to college together at Tufts University and were peripherally connected through the theater community,” DelPan-Monley reported. “So in some ways this project is our reunion, a decade later. A well-fated connection.”

Once they agreed to work together on this ArtsWest and Pork-Filled Players co-production, DelPan-Monley and Izumi collaborated from the inception. “We began earlier this year with Zoom meetings, with really rich conversations looking into the large plot arcs, themes, and scoping in on the character dynamics and dialogue,” DelPan-Monley recounted. “It was such a treat to be able to really develop my understanding of the play through conversation with Julia.”

Immersion in an imaginary realm of gods was key to DelPan-Monley’s preparation for rehearsals. “I drifted along with the emotional and physical arc of the show, reading it and really letting it sink in,” she said. “I gathered images and references that felt of the play and began conversations with the designers to world-build and co-envision the substance that the play sits in.”

Imagining the dynamic circulation of the actors onstage has been foundational, as well. “I approach directing through my lens of choreography and movement,” she described, “and so much of my preparation for the show was envisioning how the story moves, the physical relationship of the characters to one another, and what the body expresses in between the words.”

But this play isn’t solely a fantasy of god-like power. “Amidst all of the epic myth, whimsical adventure and quippy characters, this play has a really simple and necessary underlying wonderment: how do we sit with and move through grief and loss without letting it destroy us?” DelPan-Monley posed. “I’ve found myself and my friends and the society that I was raised in really struggling to know how to process our grief.”

miku explores ways of adapting to difficult change. “This play gives space for us to wonder and imagine what it could be to let ourselves feel and mourn what is unchangeable, and offers that we can return to ourselves with our stories and with our relationships,” DelPan-Monley said. “It also does not take itself too seriously, while still sincerely holding the weight of loss and trauma.”

DelPan-Monley has facilitated these explorations of the mind and heart during rehearsal, so that they can be conveyed through the actors’ bodies during the show. “Yesterday in rehearsal we were focusing on a section of movement,” she recalled. “The cast has been generating sections of the choreography as well as co-building the group moments of touch.”

The cast started by creating the walking patterns and shapes that the group would make while exploring power and emotion on stage. “Then we had to breathe life and intention into that structure,” she said. “To do that, we went back into an explorative space, discovering our bodies’ impulses and then seeing how to lean in and be available and connected to the other actors onstage.”

There were many discovery moments during that rehearsal session, of which audience members will enjoy the fruition. “We discussed what works and doesn’t work for us as individuals, practicing consent and taking the time,” she reported. “It is in those moments that I am reminded about how much the body can say beyond the language of words, and what a treat it is that in this play we get to express with both and all.”

miku, and the gods. runs from June 16 to July 3 at ArtsWest, 4711 California Avenue Southwest, Seattle.