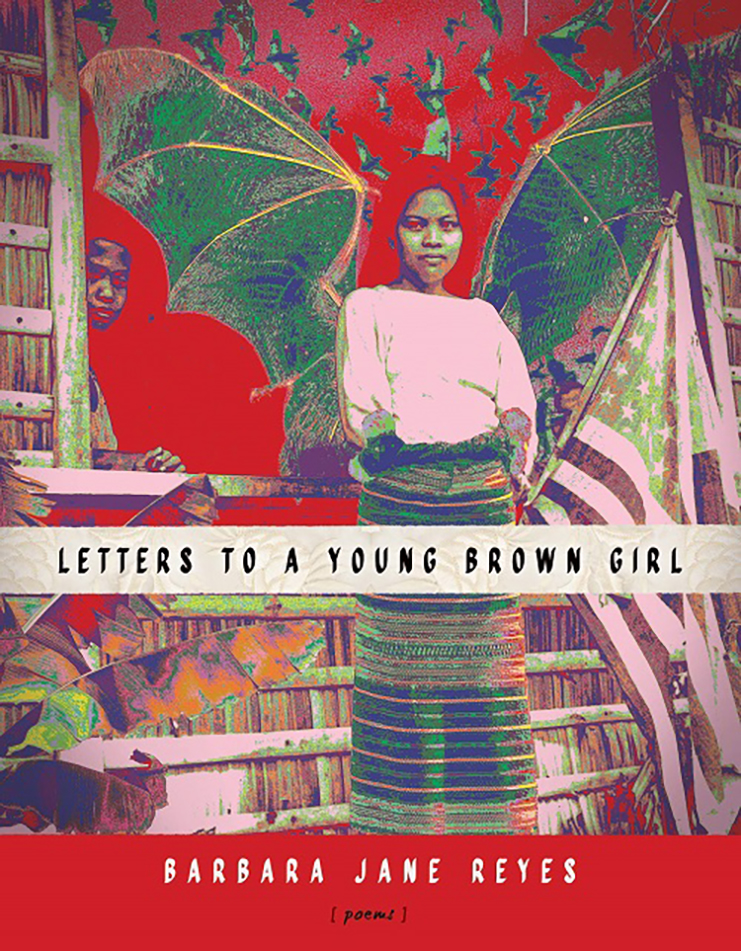 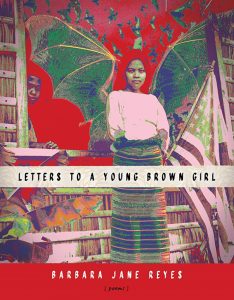 Letters to a Young Brown Girl (2020) is the sixth and latest book of poetry by Filipina-American poet Barbara Jane Reyes, whose previous poetry collections include Gravities of Center, Poeta en San Francisco, Diwata, To Love as Aswang and Invocation to Daughters.

As a former young Brown girl myself, this book captivated me from the very first line:

If you want to know what we are whose body parts are scattered to the winds, dispersed as heirloom seeds

—there I stopped, at the first moment enchanted at the heirloom seeds, in the next moment blown backward by that wind, to reread “If you want to know what we are…”

I mulled over the words for a beat, drawn in to the secretiveness of it, caught off-guard by “what we are.” Not who, but what.

Then I read on to find: the poet stops to deconstruct those exact words. It felt like the moment when you and a friend say the same thing at the same time, and that friend says “Jinx!” and stops you in your tracks. It was a jinx that caught me in my tracks, and I sensed that this book was going to crawl inside my skull and nest there.

And I was stunned to realize that I was only on the second page. Page after page, I found reflections of myself.

I turned the page to ‘Brown Girl Ghost,’ and Maria Clara met me there. Maria Clara—the classic character in Jose Rizal’s Noli Me Tángere, and the standard of womanhood against whom all Filipina-Americans must inevitably be judged—reminded me that I had been that Brown Girl ghost, a “tiny night tremor” singing and sobbing as boys pulverized each other on Street Fighter in the other room.

I turned the page to ‘Brown Girl Glossary of Terms,’ and I was introducing myself to a white male boss, who looked at my face and decreed more than guessed: You’re Filipino. How’d I know? You look Asian but your name is Spanish.

I turned the page to ‘[Remember those diaries we were gifted]’ and I was in high school again, scribbling into a 50-cent notebook from Walmart, imagining myself to be F. Scott Fitzgerald because it would be some years yet until I learned the difference.

But if Letters is a mirror examining the instruction and restriction of the Brown Girl, it equally celebrates the Brown Girl’s instinct and freedom. Reyes shows us our freedom in the way we choose to move, in the way music makes us feel. By the poem ‘Track: “Bad Girls,” M.I.A. (2010).’ I realized that I was reading this book with my whole body. As I read, “we brown, and we drive, and we dirty. Yeah” my head had been bobbing, my neck had been strutting, and my feet had been tapping—no music needed but the music on the page.

And just when you think you’ve settled into one groove, that you have a grasp of what the “Letters” are saying, or who this “Young Brown Girl” is, Reyes changes it up once again, with the quickness of a hummingbird and the loudness of a semi-truck.

Letters to a Young Brown Girl shifts deftly between lies and truth, re-educating us in both. Reyes destabilizes lies by biting into them with sarcasm, and trusts the reader to instinctively know when she is in the mood to undermine (“so much depends upon the suppression of us”) and when she is in the mood to uplift (“no, I will never leave this place”). Sometimes spotting the difference is easy, and sometimes it isn’t, but the point is in the effort. The effort is how we answer the question Reyes poses in her opening poem, when sister asks sister, “teach me how to be steel like you.”

Maybe Reyes is telling us that the Young Brown Girl can become steel when she figures out for herself what are lies and what are truths. Maybe Brown Girl must arm herself against others’ lies by forging her own truths. Maybe Brown Girl’s steel lies in the truth that no one can pin her or set her in place. Brown Girl defines herself: depending on the page, she is as a tree, or a whale, or “a tinted tongue of tiny heat,” or even “a hella starburst wow.”

This book jabs and shuffles, the lines lunge at you. Reyes rejects whatever is proper about language and declares, “I speak it better than many of you monolingual assholes making ching chong noises at me.”

But if Letters is for you—or equally, if you are for Letters—these poems are a battering ram to the heart. This book calls to the Filipina-American, specifically the Pinay writer. Its references might strike other readers as too targeted, too Brown, but that’s exactly why they must be there. To the girl who is taught to be small, who fears that no one will ever hear her, Reyes affirms that she is listening, that we are everything and enough.

We are more than our trauma, and Reyes’ musical, repeating style makes moments fold and unfold for us like a kaleidoscope: many parts, many directions, one smooth movement, to show us the beauty in the fracture.

We are the diaspora hustling. The coalition gathering. The anthem swelling.

We are the dance troupe on Pilipino Cultural Night, huddled backstage, hands to center, hyping our collective energy and breaking with “Isang Bagsak”: one effort, one force, one fall.