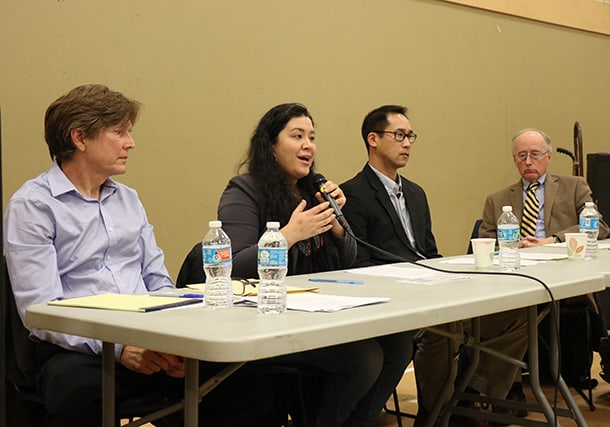 The Seattle Office of Immigrants and Refugees teamed up with the Asian Counseling and Referral Service (ACRS) for an informational session on the increased Immigration and Customs Enforcement (ICE) arrests of immigrants nationwide.

The gym of the ACRS filled with around 100 concerned community members and refugees seeking guidance on the increased arrests. To provide advice and background on the issue, the session included a panel moderated by Emily Headings – the Immigration Law and Policy Advisor for the Office of Information and Regulatory Affairs (OIRA).

The Southeast Asia Resource Action Center (SEARAC), an organization that works to advance the interests of Cambodian, Laotian and Vietnamese Americans, released a press release four hours prior to the event. The press release noted that, according to Cambodia’s immigration department, more than 70 Cambodians from the U.S. will be deported in the month of December.

Jay Stansell, a visiting professor with the Evergreen State College, explained that anyone with a final order for deportation is at high risk. Those with final orders in the Southeast Asian communities, specifically, Cambodian, Laotian and Vietnamese, are especially in danger.

Many of the immigrants from these countries came to the U.S. as refugees. Attempts in the past to deport them back to their home country if they committed a crime in the U.S. usually faltered because those countries did not accept deportees, Stansell explained. Many of the governments in power in Southeast Asia now are the same as those the refugees fled from, so they weren’t interested in accepting the refugees back.

Cambodia signed a repatriation agreement with the U.S. government in 2002, allowing deportees back into the country. Vietnam signed one in 2008, accepting deportees who entered the U.S. on or after July, 1995. No agreements have been made with Laos.

On October 30, SEARAC released a joint community alert noting that the U.S. had submitted 95 cases to the Vietnamese government for processing. Of the 95 cases, several cases included people who came to the United States before 1995. This runs contrary to the repatriation agreement, in which Vietnam agreed not to accept deportees who came to the U.S. before 1995.

Stansell fears that the Trump administration will continue to expand deportation efforts. A common concern among the panelists was that the deportations seem to be unpredictable.

“I can have one case where I can see why they detained that guy because he had some serious injury DUI case so they didn’t want to give him a break,” said Bob Gibbs, an attorney with Gibbs Houston Pauw.

Gibbs described another case in which a student received a final order of removal because he missed his court hearing due to sending in the wrong form. The student Gibbs spoke of had a wife and two kids and no criminal history but was detained simply because he filled out the wrong paperwork.

This is just one of the reasons why the recent ICE raids have been so hard for communities and the attorneys and organizations attempting to help, Gibbs said. There is no obvious pattern that they can find for those who are detained.

There are 1.7 million Asian Americans in the U.S. who are undocumented immigrants, according to a 2015 study from the Center for Migration Studies. Additionally, the undocumented population from Asia has grown 3.5 times faster than other undocumented groups between 2000 and 2015.

The American Immigration Council estimates that Washington state could lose $14.5 billion in economic activity, $6.4 million in gross state product, and around 71,197 jobs if all undocumented immigrants were removed.

Despite the imminent fear surrounding the heavy topic of detention and deportation, the panelists emphasized the importance of events that bring communities together.

“If you look around here today, this response is what we need right now,” said panelist Henry Hwang, an attorney with the Northwest Immigrant Rights Project.

Hwang went through legal actions one can take if they are afraid they may be at risk for being detained and also what to do if you are detained.

“You need to think about this now, this is something you can tell your communities,” Hwang said. “There are two things I’m always fighting against which is not enough time and not enough information.”

Hwang advised that a simple step you can take is filing a Freedom of Information Act (FOIA) request for your immigration file. It’s free, and those who need help can come to Northwest Immigrant Rights Project. This information can help attorneys figure out how to best help you.

Those in removal proceedings should first look back and see if they might have citizenship, a simple solution that shouldn’t be overlooked according to Hwang.

Sandy Restrepo, the Executive Director of Colectiva Legal del Pueblo, focused on the non-legal side of what can be done. One of the most important things is for people to know their rights. Restrepo emphasized that you do not have to speak to an ICE agent or other immigrant official. A tactic ICE agents use is intimidation – if they ask if you can answer a few questions tell them no and that you want to speak to a lawyer, Restrepo said.

Additionally, the FBI and ICE cannot come into your home without a warrant granted by a judge. The Washington Immigration Solidarity Network has a hotline to report immigration activity. Volunteers monitor the lines, and if needed can send out a rapid response team consisting of lawyers and social workers who can go to where you are.

A tactic that has been successful, according to Restrepo, is making a case go public so that it gains public support. If someone fears they may be detained, prior cases have had success by having a group of people accompany them to their ICE check-ins. The crowd of people, Restrepo says usually takes ICE by surprise and can delay the process.

Restrepo also offered some ways to support someone you know who is detained. One thing Restrepo suggested was fundraising to pay the bond and release them from the ICE facility. Unlike other bonds, immigration bonds must be paid in full and they often run from $25,000 to $50,000. Another important thing you can do is help show someone has good moral character by writing letters and then showing up to court hearings to show they have ties to community.

“What we are doing at a local and national level is building our machine of resistance,” said Restrepo. “The only way we are going to keep resisting…is if we are all unified together.”

You can view the whole session here:

Resource Guide from SEARAC handed out at session