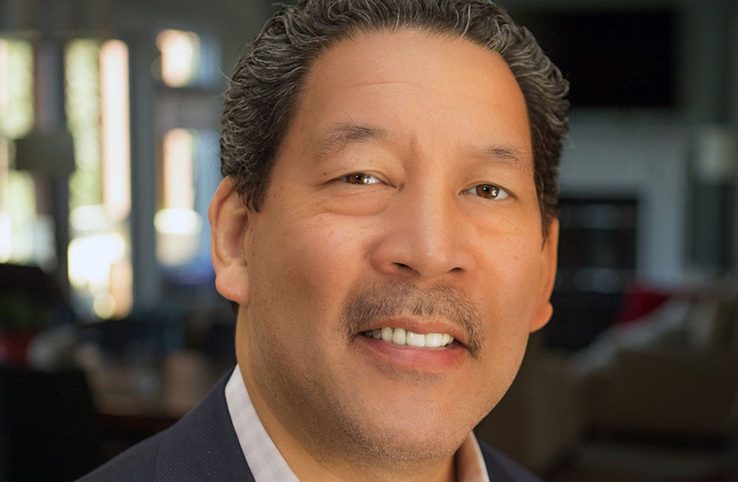 When Harrell joined UW football, the team hadn’t been to a Rose Bowl in over a decade. By the time he graduated, Harrell and the Huskies had won the Rose Bowl and the Sun Bowl back-to-back. Harrell says he’s fortunate to have been on teams that “start at nothing.”

“It’s very easy to accept a leadership position when things are going great: the company’s in the black, the city is happy, the team on the field is winning,” Harrell said. “The toughest time is when things are at an all time low.”

Near Garfield High School where he earned the football scholarship that brought him to the UW, former Seattle City Council President Bruce Harrell announced his bid for mayor and a call for a “rebirth” of Seattle.

The city of Seattle has seen seven mayors in two decades, only one elected twice. Harrell is among those seven – one of four mayors in three months at the end of 2017 when Mayor Ed Murray stepped down amid sex abuse allegations, which Harrell intially defended. According to Harrell, he felt his comment was “misconstrued” as not all evidence was available at the time.

Harrell served for five days as an automatic appointee before returning to the council. With the economic effects of the pandemic and the racial unrest following the killing of George Floyd,  Harrell has his sights set on the very job he turned down in 2017.

“Now is a time for rebirth in the city,” Harrell said. “I would not have said that in 2017 – it wouldn’t have made sense to say that then.”

This “rebirth” includes Chinatown-International District (CID), according to Harrell.

Harrell spent 11 years on the city council representing District 2, which includes CID and Southeast Seattle. In this time, Harrell acknowledges that he and the city did not do enough to address the safety issues in the CID.

Harrell served on the council in 2015 when activist and the CID’s unofficial security guard, Donnie Chin was murdered. His murder remains unsolved. Harrel acknowledges the work of community organizations to keep the CID safe, but as mayor, he would like to see the city “put some structure around it.”

“We have to preserve this gem,” Harrell said. “We have to make sure that people from all 88 square miles of the city know that it’s safe, it’s fun, it’s vibrant, it’s the place to be.”

Harrell says the security concerns must be “firmly addressed”. Without knowing the current deployment numbers in the CID, Harrell says is unsure if the CID needs more or less policing. Harrell does say his strategy would include “more effective” policing.

Harrell says he looks at the police through a lense that is not “over-accusatory” or “blindly supportive.”

With “nothing but respect” for his friends, family and associates in the police force, Harrell pushes reform. Harrell has helped in the effort for police officer body cams since 2010, according to Seattle Met. He spoke out against Seattle Police Department’s (SPD) approach to a 2015 May Day march, calling one particularly aggressive arrest “idiotic.”

Although Harrell says the Seattle Police Union refused to interview him when he was up for reelection due to this criticism, he has not severed all police ties. According to KOMO News Victoria Beach, the chair of SPD African American Community, has already endorsed Harrell.

Part of his plan includes anti-bias training and responding with “the right kind of personnel” like social workers and addiction specialists. He also wants to require officers to watch the 8 minutes and 46 seconds of George Floyd’s murder, which does not seem to impress his fellow candidates.

“I’m not afraid to say I support more officers,” Harrell said when asked about policing strategy for the CID. “I know people are calling to defund or abolish the police – that is not my narrative.”

His reformist approach may look moderate next to his competition. Seattle City Council president Lorena González was one of seven council members whose pledge to defund the SPD led to an almost 20% cut to the 2021 budget. Colleen Echohawk, executive director of the Chief Seattle Club, supports defunding, but is not committed to activist’s push for 50%. Andrew Grant Houston, who serves as Interim Policy Manager for Councilmember Teresa Mosqueda, calls to defund by 50% at least.

Mayor Durkan, whose veto on defund policy was overruled, is not seeking re-election after her single term plagued with calls for resignation. Though, like Durkan, he does not support defunding the police, Harrell says he will be “totally different from any mayor that’s served.”

“I do not have to be told about racial injustice by the police force, by employers, or by any other institution,” said Harrell, who was raised by his Black father and Japanese mother after the Civil Rights era. “This is a lived experience for me, my wife, my children, my parents, and my grandparents.”

The primary is set for Aug. 3, followed by the Nov. 2 general election. Harrell is hopeful Seattle will resonate with his message of “rebirth” in the ongoing COVID-19 health crisis and racial reckoning.

“If you walk these streets, building after building, tent after tent, there’s almost this despair,” Harrell said. “The only way out of despair is hope. Anyone who knows me knows I’m a glass-half-full kind of guy.”