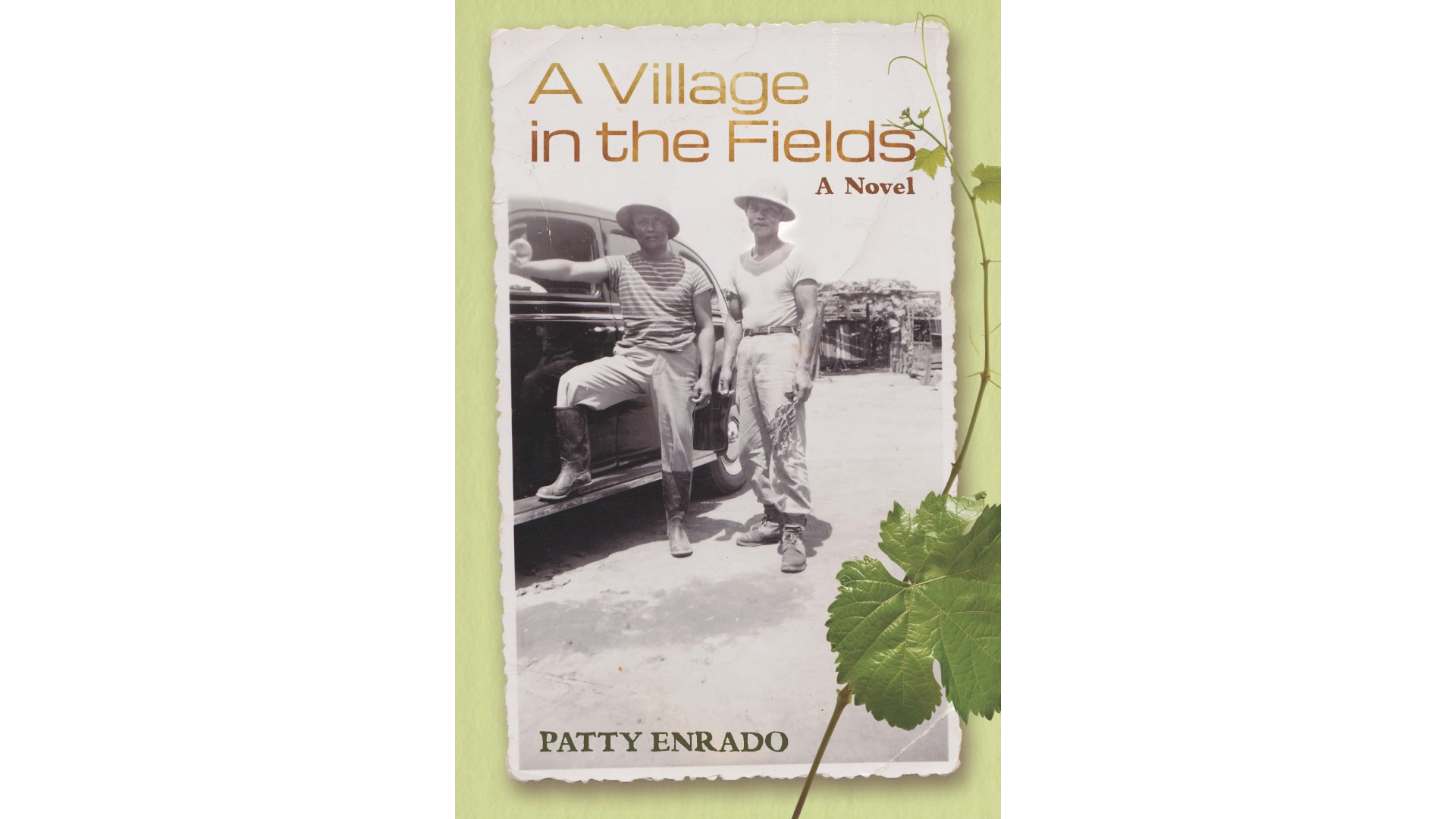 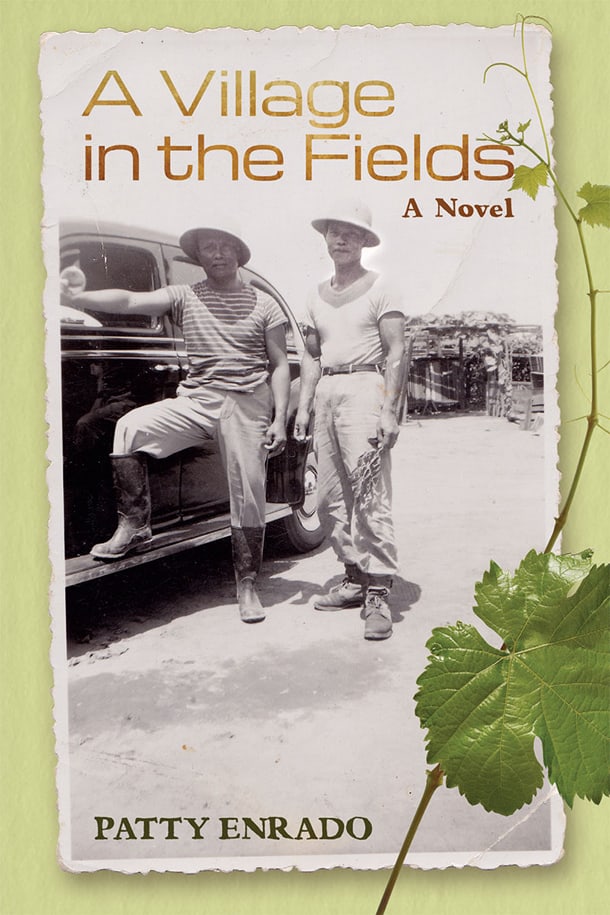 Carlos Bulosan’s iconic America Is In The Heart begins in the rural Philippines  and ends in America with the start of World War II. Patty Enrado, with a clear and confident style, takes the powerful saga of those early Pinoys beyond the war years and to the end of the line.

In A Village in the Fields, Enrado chooses an old Pinoy, Fausto Empleo, and examines his life and the lives of other manongs through the prism of Fausto’s struggles and challenges. His story is credible; it is also familiar—at least to those readers who knew the men of that fabled generation.

In telling this foundational story of Filipino America, Village lacks only the passage of time.

In contrast, America has found a literary/historical niche over the decades, and is required reading in many ethnic studies programs. In America, Bulosan is the book’s protagonist and narrator, who as a young boy in the then-American Philippines, dreams of an idealized America as described by a Thomasite teacher, Mary Strandon. It is a land where Abraham Lincoln died because he freed the slaves.

An innocent and intrigued Carlos asks, “Abraham Lincoln died for a black person?”

The amazement of the young Bulosan points to the grinding poverty of the Philippine countryside. It also points to the reality of Filipino culture.

In the rural and medieval Philippines of the early 20th Century, peasants were staggered by significant changes to the landlord-tenant relationship, where many landlords, obsessed by tariff-free access to America’s vast market, focused more and more on reducing costs and maximizing profits. The economic burden of these changes was born by each hacienda’s peasants, but their welfare inevitably became an afterthought to many landlords.  Within this setting, it was also impossible for young (and dark) people like Carlos to imagine the owners of these great and increasingly profitable estates (often mestizos) to die for their darker-skinned peasants.

This was Bulosan’s Philippines.

And so it is no surprise that the young Carlos figured that America must be a significant improvement, this great, meritocratic place, where Lincoln died for a black person. Apparently and unlike in the Philippines, skin color didn’t matter there, but intelligence, discipline, and hard work did.

Carlos, of course, was wrong, as was Fausto Empleo. And just as Bulosan, the young Fausto and his family were mired in poverty, scratching out a living by planting and harvesting rice. Early on, he decided there had to be a good life beyond the barrio, beyond the rice fields.

And his ticket out, he concluded, was education, American style.

Despite his father’s objection, Fausto and Benny, his cousin, decide to leave for America. There, the wide-eyed youngsters plan to join four older male cousins already in the promised land.

Like Bulosan, Fausto’s idyllic dreams crumble quickly once he is on American soil. Starting with pervasive anti-Filipino hatred, especially virulent among whites on the West Coast, and the grim setting of Depression-Era America, the choices facing the Manong Generation were few indeed. For the Pinoys of that era, they were forced to live their lives in America’s underbelly—whether  it was a flophouse hotel room in Seattle or Los Angeles, or the migratory road leading from backbreaking seasonal work on West Coast farms to the Alaskan canneries—and back again.

Then repeat again the next year. And for years to come.

The one interruption was World War II, when Fausto and many of his peers joined the U.S. Army, serving in the First Filipino Regiment in the Pacific.  In the war against Japan, the loyalty of Filipinos—both in the Philippines and in America—served to reduce white American hostility toward them. But the uptick in race relations would more fully benefit  the manongs’ American-born children, not the old-timers themselves.

For Fausto, an Army veteran, that meant a return to the farms and the hard life he had lived before the war. The decades of low pay, backbreaking work, sacrifice, and shrunken dreams made what happened inevitable.

The movement to organize farmworkers took hold in Delano, California in 1965, and Fausto joined the ranks of those Pinoys who walked away from the fields. In the minds of too many Americans, that single event in U.S. labor history is linked to César Chavez, the Chicano labor leader.

But it was a Pinoy, Larry Itliong—the tough-talking, cigar-chomping organizer—who persuaded Filipinos to go on strike. Mexican workers followed the Filipino lead—not the other way around.

Standing up for something important is never for the weak.

The story of Fausto Empleo is also the story of the Manong Generation. Patty Enrado tells it well.

Robert Flor and Patty Enrado read together at Third Place Books in Seward Park on Thursday, October 20 at 7:00 p.m. Flor reads from his poetry book ‘Alaskero Memories’ based on his work in the Alaskan canneries and Enrado will read from her novel ‘A Village in the Fields’ about Filipino American labor organizers in Delano. In addition a film entitled ‘Delano Manongs: Forgotten Heroes of the United Farm Workers Movement’ will be screened. 5041 Wilson Ave. S. (206) 474-2200. This events repeats on October 21 at 7:00 p.m. at El Centro de la Raza at the  Centralia Community Center and on October 22 at 4:00 p.m. at the Filipino Community Hall of Yakima Valley. This is all part of a series of events celebrating Filipino American History Month throughout the state. Go to http://fanhs-national.org/filam/about/ for complete details.