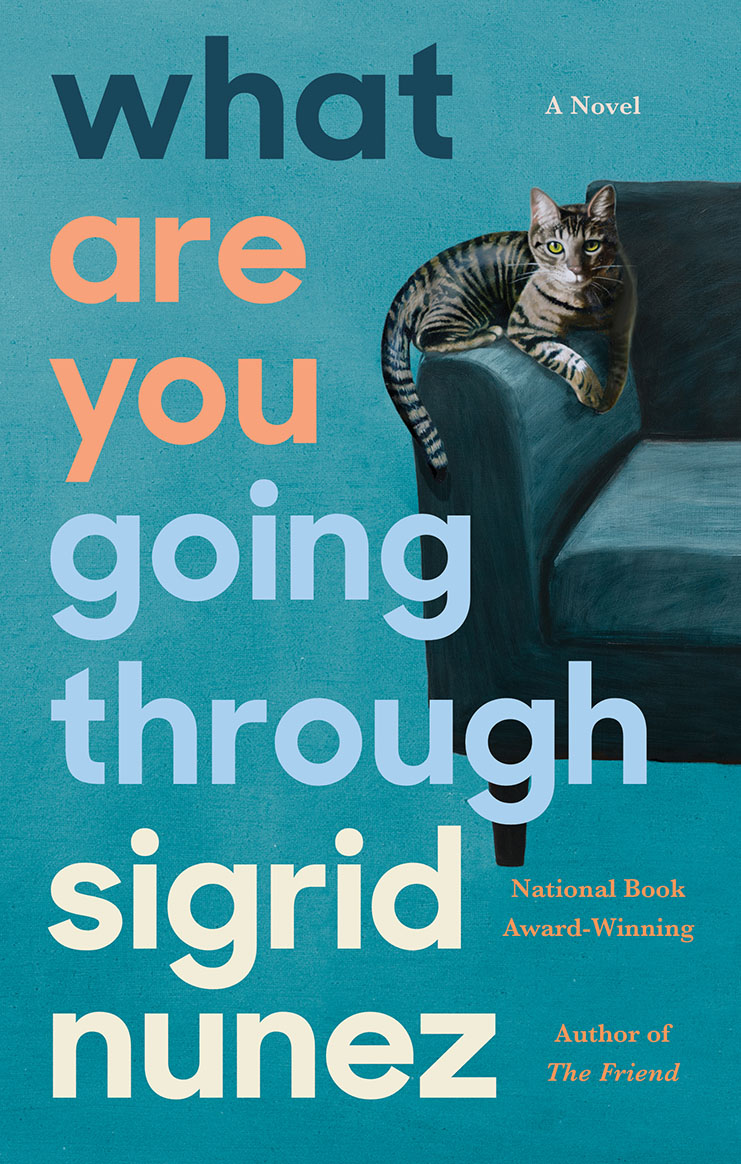 Kafka, Airbnb and a ubiquitous mystery novel. These aren’t obvious tools to sift the sanctity of human death, which is exactly what separates What Are You Going Through from other new releases probing the topic. Sigrid Nunez’s debut novel, The Friend, also explored loss and ultimately garnered her a National Book Award. But the fact that her second novel reprises this theme in the middle of a pandemic isn’t what confirms Nunez’s gift for meditating on mortality. What Are You Going Through’s uniquely disquieting premise would make it a statement piece for any season.

What Are You Going Through opens with the narrator/protagonist (Nunez’s characters remain nameless) observing a professor rant about the hopelessness of climate change. The man offers his audience only one solution: stop having children. Why bring life into a world hurtling toward collapse? The protagonist wanders back to the Airbnb where she’s staying while visiting a friend who might beat terminal cancer. Ironically, the friend is even more skeptical about the idea of survival than the lecturer:

“It sounds absurd, she said. But after thinking all this time that this was the end, and trying to prepare myself for it, survival feels anticlimactic.”

The protagonist is surprisingly unaffected by both interactions: her friend is long-term but not close, and the professor is an ex, but not a recent one. Nunez uses these semi-detached relationships to allow her (and therefore us) enough psychological space to ponder the moral dilemmas about to unfold.

Nunez doesn’t keep her protagonist passive for long, even if the woman remains emotionally distant. Her friend presents a shocking request during the protagonist’s second visit: the experimental cancer treatments have failed and she wants help taking a final vacation. When the protagonist hesitates, her friend assures her not to worry –  she’s already procured the drug necessary to die well at the trip’s end. All she needs is someone to guarantee she lives well first. Traditional readers (myself included) might wish the protagonist hesitated longer than she does, but she only suppresses a brief wave of nausea and agrees. After all, her friend hasn’t given her an easy way out:

“This is how we’ve been taught to see cancer: a fight between patient and disease. Which is to say between good and evil…People ought to be able to understand that this is my way of fighting, she says. Cancer can’t get me if I get me first.”

Is it right to force everyone to wait for a medical miracle that probably won’t happen, we hear Nunez asking, especially after they’ve exhausted their realistic options?

But even if the protagonist agrees to help more readily than some of us would prefer, she still experiences the ethical turmoil over euthanasia. Nunez’s writing haunts us almost instantly with its interiority, and this is nowhere more evident than in the protagonist’s emotional distress. She cheerfully designs her friend’s perfect getaway while desperately sifting through memories and coincidences in an attempt to reconcile herself to her role. Why did so many of her older female friends break themselves submitting to life’s slanted expectations? Why does that mystery novel with the suicide crop up at every single Airbnb? She even communes with one host’s adopted cat, wondering what kept it alive when it should have died. Life – and the love of it – seems random, terrifying and yet somehow inspiring.

Like real life, much of the protagonist’s conflict is cyclical. If she can’t answer why she hopes her friend won’t end her life, she – and presumably Nunez – appears convinced that her friend has every right to end it. This somewhat irrational line of thinking leads her to a rather rational confidante: her anti-natalist ex. Wouldn’t a man who advocates for the end of procreation be equally passionate about normalizing euthanasia? Here, Nunez further complicates the doubts some of us might have been entertaining about the friend’s decision.

It’s true that the professor lectures about the hopelessness of climate change, he says, but he can’t regret his own children. His talks are a matter of policy, not of practice. It would be unrealistic to expect the whole country to stop having children, much less the world. In the same way, he assures the protagonist that there’s no need for her to alter her own feelings. The important thing is to support her friend, not to become a euthanasia advocate. She’s somewhat relieved to have verbalized her feelings – as we would be in real life – but she still remains unresolved as to what she really wants for her friend.

Her friend, the relentless constant in What Are You Going Through, appears undeterred even as her plans unravel and the plot begins resembling the mystery novel that she and the protagonist never finish. Nevertheless, a hint of indecision finally surfaces during a podcast interview that she gives at the end of the book. When asked about the meaning of life, the friend responds by quoting Kafka, much to the host’s dismay:

“But the question is what is the meaning of your life.

That it stops, my friend says. Just like Kafka said. (Brittle little laugh).”

Although Kafka references recur throughout the novel (the protagonist is a literature professor), Nunez only begins associating the word “brittle” with the friend during the final chapters. How much of her resolve to die really is her own? How much of it really is unshakeable? By the final pages we realize that What Are You Going Through is less about the protagonist’s friend – or even euthanasia – than it is about the process of dying. How much does society and our environment play a part in how we die? How much should it? Perhaps Nunez could have posed these questions over a less stark backdrop than euthanasia, but her poignant plot and brilliant writing will haunt us long after we finish the final page.