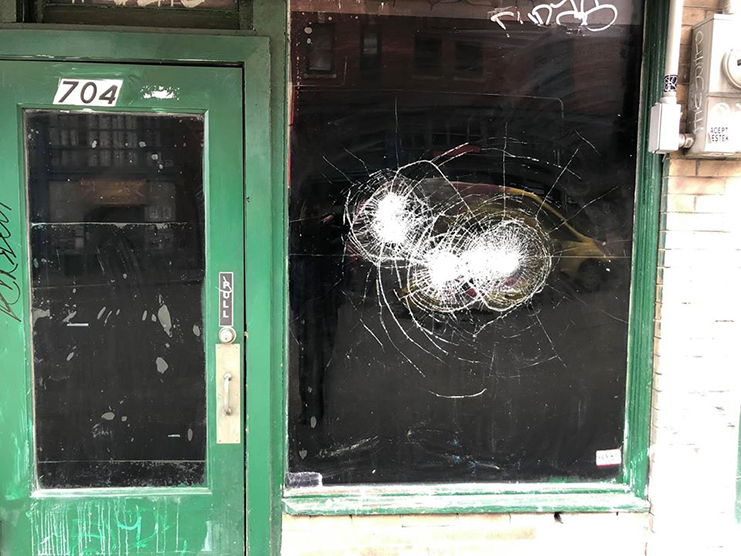 Around the world and across the U.S., concerns are growing over racism and attacks on Asians and Asian Americans tied to fears of the Coronavirus pandemic.

The city of Seattle, unfortunately, is not immune.

“What did we do to deserve this?”

That’s the question posed by Eric Chan, whose family owns Jade Garden Restaurant in Chinatown/International District. He recently posted a picture on the Facebook page “Support the ID-Community United” showing a glass window of his restaurant smashed by vandals. In another post, a Seattle man by the name of Jay San posted a picture of himself with bruises and cuts to his face and hands. He wrote in the post, “I was jumped at QFC and called A [sic] chink and was told to go back to my country to keep the China virus away from America”.

In a new FBI analysis as reported by ABC News, officials warn of potential increase of hate crimes against Asian Americans. One incident documented by federal officials describes how three Asian American family members, including a two-year old and a six-year old, in Midland Texas were stabbed on March 14th. The suspect said he thought the family was Chinese and was infecting people with coronavirus. And according to NBC News, the group “Stop AAPI Hate”, says its online forum showed 650 direct reports of discrimination against Asian Americans in a one week period from March 18th-25th.

“I feel bad, you know. It’s not right. This virus. It’s not our fault,” said Linh Thach, the Asian Community Liaison for Seattle Police Department. For the past five years, Thach has been the voice of the Asian American communities in the greater Seattle area. He is advising residents to speak out and call 911 if they experience what is deemed to be a hate crime, but he admits that is not always easy to do.

“One problem is language barrier. The other is culture. They think what happened is not a big deal and they don’t want to bother the police,” said Thach. “I know there are concerns in the community, not just about crime but whether they will be okay with their health or will their business survive this. I just tell them right now it’s most important to stay safe, don’t go out a lot and always be careful.”

Community leader and social justice advocate, Frank Irigon, said he has heard of recent racist incidents toward Asian Americans in Seattle, including ones near the UW campus. He said words matter and when people use terms like the “Chinese Virus” including at one point, by President Trump, that can ignite discrimination against Americans of Asian descent. The president has since changed his tone, calling for protection of Asian American community.

“My reaction was anger, and yet not surprised given Trump and his supporters’ penchant for violence against people of color, immigrants and refugees, Jews and Muslims, LGBTQ, etc,” said Irigon. “The COVID-19 pandemic was just another excuse to Make America Great Again and white again. Unfortunately, there were instances of other people of color also targeting Chinese and other Asians with violence and verbal assaults.”

Irigon said right now the community, including the Seattle Police, must ask what more we can do prevent the violence especially towards Asian Americans.

“The Seattle Police Department under Chief Carmen Best is taking the necessary actions to do just that by a commitment to community policing, having officers who are bilingual, and having an Asian American on her command staff. Granted there are more to be done but she’s willing to be honest about it,” said Irigon.

In her latest online press briefing, Chief Best recruited the help of former KING 5 News Anchor Lori Matsukawa to spread the message that “Washington State is no place for hate”. Best then urged the public to report any hate crime, including racist name-calling, by calling 911.

According to Seattle Police, as of March 30th, they don’t have any criminal cases they are investigating related to violence towards Asian Americans tied to the coronavirus. Jonah Spangenthal-Lee with the SPD’s Public affairs unit said there’s always been a community policing team designated to the Chinatown International District, even before the spread of COVID-19. And they continue to maintain visibility in this neighborhood, even when many businesses in the area have shut down due to mandated social distancing.

“We are aware of the heightened concern and we make sure we communicate with the Chinatown/ID community,” said Spangenthal-Lee. “We have always had emphasis patrol depending on the day and need.”

But according to Ivy Chan, the sister of Eric Chan whose family owns Jade Garden restaurant, SPD can do better to help prevent racist attacks against Asian Americans.

“When we reported the recent vandalism at our restaurant, police told us they will be increasing patrol. But we still don’t see that, especially at night,” said Chan. “I leave the restaurant with my mom at 8 and 9 at night and we don’t see any police officers out here.”

Jade Garden is among the businesses in the Chinatown/ID neighborhood continuing to operate on a “to-go & delivery” basis. Ivy Chan said the support from the community is keeping her family going. She recently posted online pictures of local artists who came out to create visual art on the boarded-up windows of their restaurant.

“It was so cool to see and we want the community to know, despite everything that happened, we will be there for them and we know they will be there for us,” said Chan. “The important thing is we need to speak out when we are unfairly targeted. We must keep bringing awareness to this problem.”