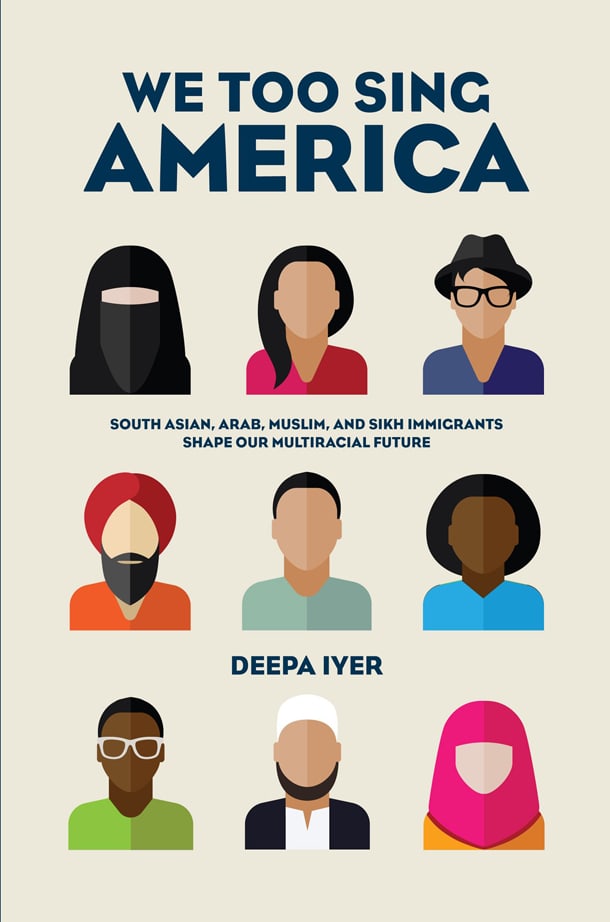 It can be difficult, if not dangerous, to be a member of a minority group in the United States.

On September 25, the L.A. Times reported that two young men assaulted Maan Singh Khalsa in Richmond, California. They used a knife to hack off chunks of his beard and hair before beating him up. Khalsa, an IT worker, wears a turban and maintains unshorn hair in keeping with the tenets of Sikh culture.

Deepa Iyer’s book, We Too Sing America, is a timely analysis of racial injustices committed by individuals, businesses and state actors against South Asian, Arab, Muslim, and Sikh immigrants from the 19th century to the present. Iyer cites instances of rights violations in the period after 9/11 including racial profiling and illegal surveillance by the FBI and police.

Is there a way to counter the rising tide of hate and prejudice? A former lawyer for the Justice Department, Iyer unsurprisingly believes that systemic changes to law and government policy is paramount. She also urges South Asians and Muslims to share their stories and culture to create awareness and empathy at the local and national level.

Storytelling is an ancient method of transmitting information. What sort of stories should South Asian and Muslim Americans tell? Stories of illegal deportations, violence, and bigotry? Or stories that speak of hopes, achievements, and gains? I recently spoke to Deepa Iyer by phone (prior to Trump winning the presidential election). The following is an edited version of the interview.

Merlyn Bilas: You wrote an opinion piece about anti-Muslim rhetoric during the 2011 election. Does the current cycle give you a sense of deja-vu?

Deepa Iyer: I think it’s so much worse during this political season. The rhetoric in this election cycle is one that we’ve seen, at least when it comes to Muslim, Arab, and South Asian American communities, since 9/11. But in this particular election cycle, it has become more mainstreamed and it has received attention that it didn’t before. So it isn’t new but it is louder and more visible, and probably more dangerous in many ways as well regardless of who prevails in this election.

DI: I think it has become mainstreamed. You have a candidate [Donald J. Trump] who is talking about extreme vetting of immigrants and refugees, of creating a deportation force, and banning Muslims. [Trump] is talking about communities of color in ways that are actually not reflective of their lived situations. And I think that at some level what he has been saying has caught on with a particular group of people in this country. Even if Hilary Clinton prevails in the election, the damage is done. We see that there are parts of the alt-right and other segments of this country who are not necessarily going to give up that sort of demagoguery.

MB: You speak about the importance of sharing stories as a way to build bridges and create connections between South Asians, Arabs, Muslims and Sikhs and the communities they live in. What should people do?

DI: I think storytelling and bridge-building is one of these but certainly addressing systemic policy issues and practices is another. But on the first count, around storytelling, that’s one of the reasons that I wanted to write my book. One of the goals was to represent and give voice to the lived experiences of these communities which we often don’t hear about in the post-9/11 era. Where we think there are lots of divisions amongst people, I think sharing stories of oppression and resilience can form a bridge to connect people to each other.

MB: There are cultural prohibitions about discussing politics and religion in the United States, even among friends. Won’t it feel confrontational to bring up discussions of race?

DI: I think in this country and in this moment, even sharing stories about one’s immigration history or one’s point of entry into racial consciousness or an experience that made them feel “othered” is so fraught with tension. I’ve personally seen that when we share stories, whether it’s books, whether it’s videos or any form [that is out] there, often times there is that connection of empathy that occurs. People can say, “Oh, your story of migration to this country reminds me of my ancestor’s migration to the United States.”

MB: You have a format that you describe in your book for having these discussions, and a list of questions to start them. How does that work?

DI: Start from the standpoint of—and I include this in a lot of the workshops that I do—“What’s my point of entry?” Usually we do it with a timeline of important events that have happened in the U.S. The storytelling, when it’s contextualized to what else was happening around the same time, allows people to have a conversation that is not necessarily fraught with tension. So that they [the workshop attendees] could say that my parents moved here from Pakistan in 1966. Then we can say, that was right after the Civil Rights Act was passed in the United States. What did that mean for your parents?

MB: Do you have any other suggestions on how to talk about race?

DI: Sometimes I think these guided forms of workshops can be good but that’s not to say that we can’t have these conversations around the dinner table. The one thing that I always say is that conversations around race will be messy. Conversations about race will be a long term process so it isn’t something that can be done in one sitting. We have to be in it for the long haul. It’s important that we have the courage to bring up these issues but recognize that it’s not going to be resolved quickly or immediately.