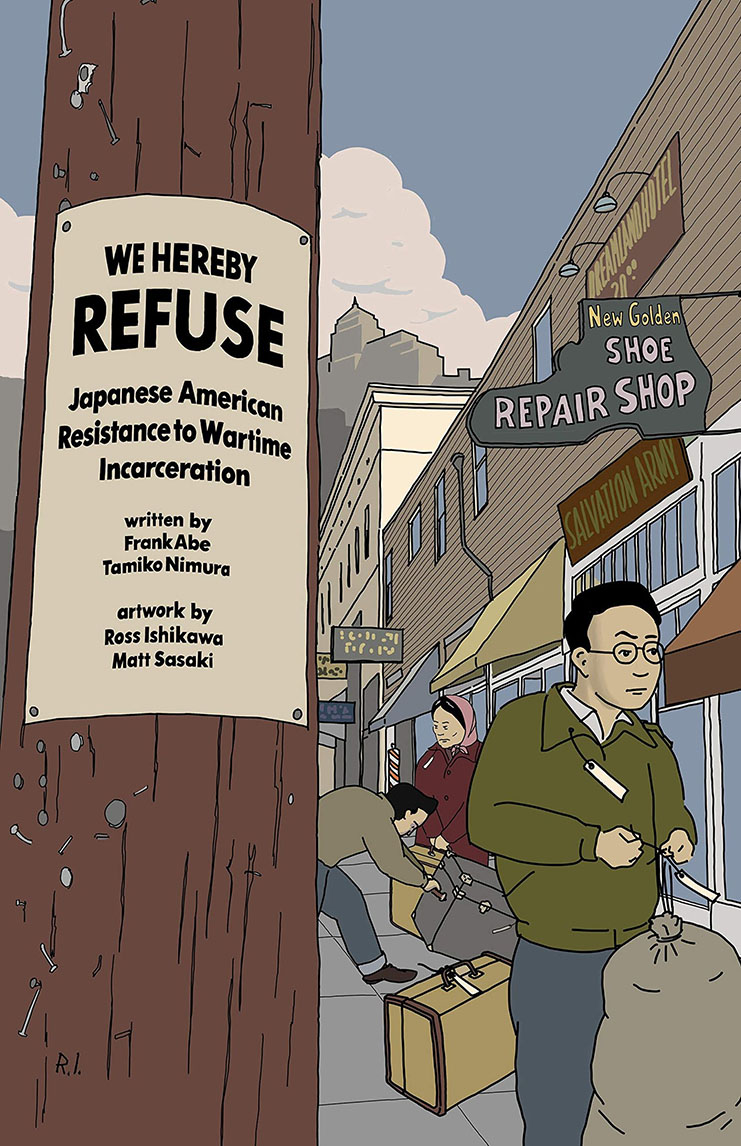 If you’re from Seattle, the Japanese American incarceration during WWII is not likely new information. What we aren’t taught in our history classes is the resistance that prevailed in the community during and after the “relocation” of Japanese Americans into concentration camps in the 1940’s.

This story, unlike many others, starts before the executive order is posted which exposes the American government for their unwarranted and unconstitutional surveillance of the Japanese Americans before Pearl Harbor and gives human connection to these characters. The novel smoothly introduces the characters and their position in their communities, humanizing them, rather than just introducing them as statistics within the 120,000 incarcerated Japanese Americans on the West Coast.

Jim Akutsu, a well-known draft resister, navigates his way through numerous adversities, finally leading to his decision to answer “no” to question 27 and 28 of the loyalty questionnaire the US government forced the incarcerees to answer. Hiroshi Kashiwagi, a poet and the playwriter of “Laughter and False Teeth,” also resisted the draft and was sent to Tule Lake after he answered “no” to the questionnaire under protest. All the while, Mitsuye Endo, represented by James C. Purcell, was fighting a case for the end of the incarceration which made it all the way to the Supreme Court.

While reading this graphic novel, I couldn’t believe the detail of each character’s plotline. The authors, Nimura and Abe, had to do such diligent and deliberate research for this book to inspire such a visceral experience. The artists, Ishikawa and Sasaki, then followed that lead with their detailed and expressive panels and designs. In one of Endo’s scenes, for instance, she is leaving the post office that Ishikawa originally drafted as having a staircase. This staircase was later taken out because the post office didn’t actually have one, which just comes to show the extent to which each minute detail of this graphic novel was researched and fact checked.

The attention to detail is greatly respectable and the work that went into it is evident from the precision of the facts and pictures. Not only do I respect the diligence, but the inclusion of a feminist perspective that rarely gets highlighted in history, much less Japanese American history.

The American government likes to white-out the blemishes in its history, teaching us all that the end of the incarceration was a decision the US government made all by itself when really, “all by themselves” meant “not at all by themselves”. Before reading this book, and as a college student studying the WWII Japanese incarceration, I had not known the impact Endo’s case had on the entire Japanese American population. Japanese women are often portrayed as fragile and passive, which is clearly not the case. This book makes sure to highlight these moments which the history is inherently inaccurate without.

Looking at this history retrospectively, it’s easy to think of ourselves as distanced from the traumatic events the Japanese community endured during the war. Having to process this trauma, though, is a lingering and constant struggle that the community has had to face. Something the drawings hint at is Kashiwagi’s long-term impact after the war. Although outside of the timeline of the novel, Kashiwagi, known as “the laureate of Tule Lake” for his writing, has a lasting impact on the community after the war ends.

As a Gosei, myself, it is often difficult to feel connected to my Japanese heritage which seems so far away, but the reality of how close we all still are to the history becomes clear when we talk to our own families and read stories like that of Jim Akutsu whose life was concentrated in Seattle. In the book, when he has a meeting with John Okada, author of No-No Boy, at Tai Tung in the International District, it makes me realize that this history occurred in my own backyard.

No-No Boy is another popular book following Ichiro Yamada, whose fictional life is loosely based on that of Jim Akutsu. Akutsu’s real life in Okada’s story shows the draft resisters’ dedication to their American principles through protest, which Ichiro, however, seems to lose sight of.

This history is not too long ago which is made clear by the parallels we see today of this racist and xenophobic sentiment that once propagated the West Coast, and the rest of America. Activist groups have formed—like Tsuru for Solidarity that has worked tirelessly to put an end to detention centers and the inhumane immigrant policies—from this shared experience of oppression by the American government and its systems.

There were various forms of resistance during the Japanese American incarceration, from Akutsu’s refusal of the draft to Kashiwagi’s playwriting and poems to Endo’s Supreme Court case. It is also important to realize that these forms of resistance are still playing out today. Before finishing the book, I thought the title “We Hereby Refuse” was indicative of the refusal to answer the loyalty questionnaire and comply with the unconstitutional incarceration, but this novel inspires a sort of introspection about this concept of refusal, which goes far beyond the war.

We Hereby Refuse accurately depicts the Japanese American experience during WWII through the intertwining experiences of Akutsu, Kashiwagi, and Endo and conveys why it is imperative that “we refuse to let it happen again.”