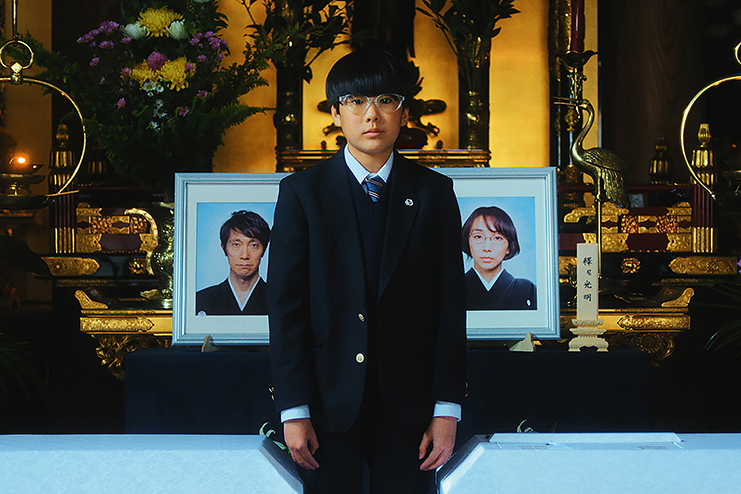 Two years after winning the Short Film Grand Jury Prize for And So We Put Goldfish in the Pool, director Makoto Nagahisa returns to the Sundance Film Festival (held in January) with his debut feature-length film, We Are Little Zombies, a punk coming-of-age story whose vibrant palette and quirky soundscape complement its emotionally devoid protagonists.

Four newly orphaned Japanese youths (their average age is 13) meet at a crematorium, bonding not only over their recent parental losses, but also the fact that none of them can bring themselves to summon an appropriate emotional response to the circumstances.

“Reality is too stupid to cry over,” deadpans prepubescent Hikari (Keito Ninomiya), who becomes the group’s de facto leader, not long after likening his dead parents’ ashes to “parmesan on Bolognese.”

Having been left mostly to his own devices by his workaholic parents, Hikari claims his only friends are video games, particularly the retro pocket device he’s obsessed with and which colors his perception of reality and bleeds over onto the film’s canvas, from the way he regards adults that he dislikes as ‘bosses’ to be defeated to the predominantly 8-bit score. Nagahisa structures the movie itself as vignettes, separating scenes and specific interactions as levels that the characters must pass, again bolstering the video game sensibility. The looming question for both the protagonists and the audience is: What is the end goal?

After the fateful meeting at the crematorium, the gang embarks on a meandering journey of self-discovery. They visit each of their former homes in turn, only to realize that there’s nothing left for them save for silence and bad memories. The four of them end up forming a band, whose bleak lyrics resonate across the internet and launch them to short-lived stardom.

The film, which Nagahisa also wrote, is full of irreverent embellishments and dark humor with undertones of commentary on Japanese society in regard to broken family life, the dispassionate and boring working class existence and society’s lack of genuine human connection. As each of the young protagonists relives, in flashback, the relationships they had with their parents, the film brings to mind the likes of Wes Anderson’s Moonrise Kingdom in its pointed depiction of adults as bumbling idiots.

Ever raucous and exuberant, We Are Little Zombies is a solid first effort for Nagahisa, and poised to achieve cult status.