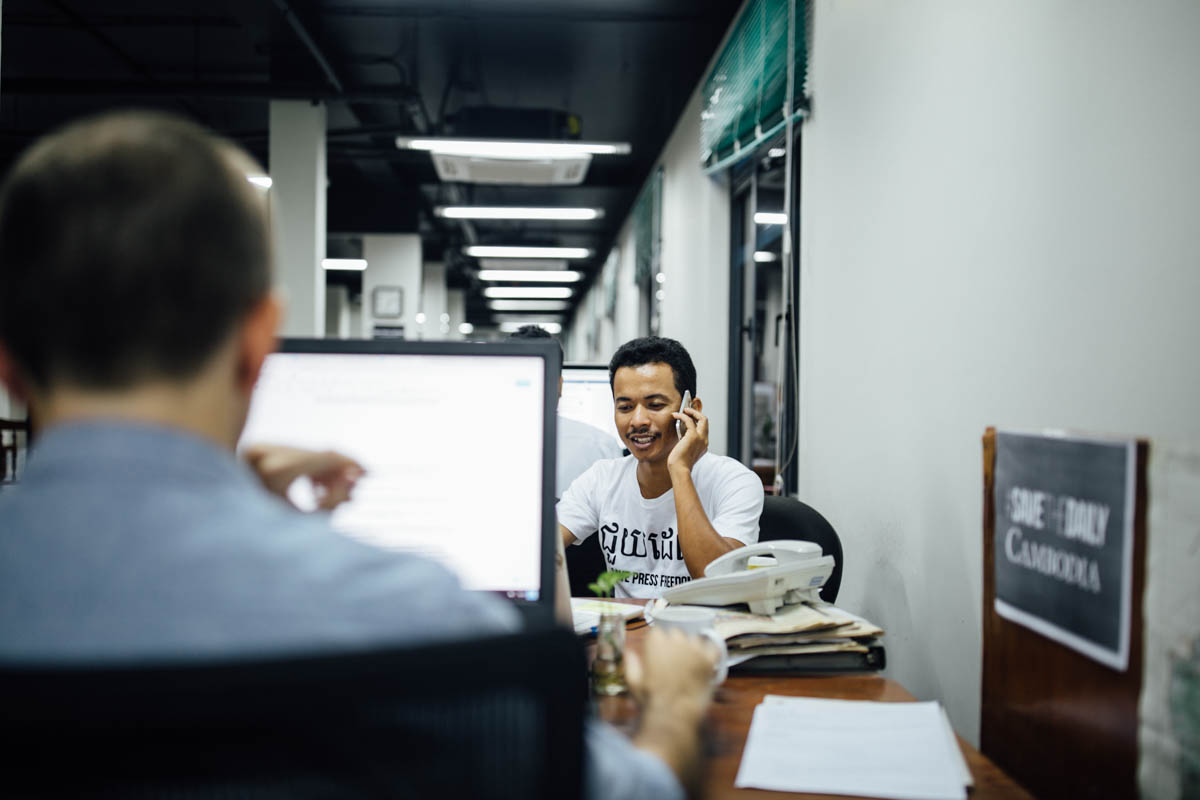 Phnom Penh, Cambodia—Even after four years of studying and practicing journalism at the University of Washington, I don’t believe I truly understood the value of press freedom until I watched it disappear in Cambodia.

Three months ago, I left the United States to report for The Cambodia Daily in Phnom Penh with romantic expectations of being a journalist in a country where a true democracy had yet to become reality, and the press could fulfill its watchdog role of holding the government accountable.

For two months, I was part of a newsroom that prided itself on reporting “without fear or favor,” denouncing abuses of power by high-ranking officials and giving a voice to those who lost homes and livelihoods due to corruption. But after 24 years of fulfilling that role, The Cambodia Daily printed its last edition on September 4 in a widespread government crackdown on independent media and political opposition.

This came in the wake of the local commune elections — similar to U.S. county elections — on June 4. During this time the leading Cambodian People’s Party (CPP) was shocked to receive only 60 percent of the popular vote. With an eye on next year’s national elections, Prime Minister Hun Sen, a CPP leader, said in a speech on June 21 that he would not hesitate to kill hundreds to remain in power.

Hun Sen began a sudden and widespread effort to silence dissent, cracking down on the free press, opposition leaders and U.S.-aligned civil society.

The Daily’s sentence came in the form of an exorbitant $6.3 million tax bill, which The Daily and critics insist was politically motivated; the tax office set the amount without even looking at the paper’s accounts.

About two dozen FM radio stations, which aired the Cambodian radio broadcaster Voice of Democracy and the U.S.-funded Radio Free Asia and Voice of America, were also ordered to either shut down or comply with government demands for coverage. The week before, the prime minister expelled foreign staff of the U.S.-affiliated National Democratic Institute, allowing them a week to leave the country.

Within 12 hours of The Daily’s final print deadline, opposition leader Kem Sokha was arrested on charges of treason and accused of colluding with the United States to topple the government. This effectively muzzled the only party with a chance of putting an end to Mr. Hun Sen’s 30-year rule in next year’s election.

Within the span of three weeks, the mirage of pluralism, democracy and freedom of press in Cambodia had been shattered.

The Daily’s last day of operation was spent feverishly covering Mr. Sokha’s arrest. It showcased the reporters’ scrappy dedication to recording the Cambodian government’s political gymnastics. The arrest took place at 12:35 a.m., and a team of Daily journalists reported throughout the night, tracking down Mr. Sokha’s whereabouts and filing developments in a live blog. Nearly every Daily staff member played a role in the coverage of Mr. Sokha’s arrest and, later on, in the authorities’ attempt to arrest the opposition party’s youth leader.

As reporters typed away furiously in the newsroom, gathering information and trying to piece together a whirlwind of events, a Cambodian colleague and I headed out at the tail end of a particularly heavy rainy-season downpour to seek more information at Mr. Sokha’s home, where his arrest had taken place. We took to the flooded streets on a motorbike, with an audience of bewildered Cambodians standing on the sidelines waiting for the murky river to subside. Sloshing through thigh-high water and weaving through flood-induced traffic jams, we reached the opposition leader’s house. Soaked from the hips down, we interviewed Mr. Sokha’s bodyguards and pieced together the sequence of events.

In one last parting shot at the repressive government, The Daily’s front page labelled the crackdown on opposition a marker of the country’s “descent into outright dictatorship.” Within hours of hitting the streets, the last issue of the paper had sold out across Phnom Penh.

Since The Daily’s closure, the government crackdown has only intensified, with Hun Sen calling on the U.S. to withdraw Peace Corps volunteers and creating a joint think-tank with China to investigate the “colour revolution” in Cambodia, a term which the prime minister has used to justify his crackdown.

The loss of The Daily’s tenacious reporting will be felt sorely by the Cambodian people.

“The people won’t see objective journalism anymore,” said senior editor Van Roeun, a Cambodian who joined The Daily in early 1997. “The truth will be lost.”

While one independent daily newspaper, The Phnom Penh Post, remains, many fear it’s the next to be targeted by the government.

In rural areas, the crackdown on radio stations has left tens of thousands without access to independent media. “With the independent media gone, all you can know is the basics that you can get from government media,” Mr Roeun said. “People will see the surface of the water, but they will not be able to see the depth of the river.”

Almost as distressing as the intensity of the government’s attack on independent media is the speed at which it took place, Mr. Roeun said. In the span of three weeks, Cambodia’s United Nations-sponsored attempt at democracy had all but vanished, he said.

In 1991, the UN oversaw an agreement between Cambodian factions, which had been at war since 1979. That year, the Vietnamese army, along with a Cambodian contingent—which included Mr. Hun Sen—had toppled the Khmer Rouge regime. The signing of the 1991 Paris Peace Agreement led to the 1993 national democratic election overseen by the UN, which has since been followed by national elections every five years. “The democracy made more than 20 years ago is lost,” Mr. Roeun said. “It disappeared in just a moment.”

Daily reporter Aun Pheap was a child during Cambodia’s Khmer Rouge regime, which in the mid-1970s claimed the lives of 2 million people in less than four years. For him, the recent government crackdown is reminiscent of tactics used during that regime. “Under the Khmer Rouge, people did not have the right to do what they wanted,” he said. “Even though they changed the approach away from killing and torturing, it still is another way of oppressing.”

Though my time at The Daily has been short, I’ve seen our reporting have tangible impact. When two of my colleagues wrote a story about a government official who had trafficked a 16-year-old girl to Saudi Arabia, the coverage got him fired.

The impact of The Daily extended far beyond those featured in its pages. Read by the country’s university students and government officials from Mr. Hun Sen down, it has chronicled the country’s history since its first issue on Aug. 20, 1993.

The sudden timing of The Daily’s demise has an easily identifiable culprit: increased support from China. “If the upcoming election has provided the catalyst for the current crackdown, Chinese support has provided the means,” said Sebastian Strangio, a journalist and the author of the book Hun Sen’s Cambodia.

“Before, Hun Sen’s government was too reliant on Western aid to go too far in suppressing its opponents; crackdowns were always followed by periods of relaxation geared towards managing outside opinion. Now, with strong Chinese support, there is less need to take heed of what Western democracies think,” he said.

The bleak future of free press in Cambodia has left me reflecting on the whiplash that took place during my short stay here. When I arrived, Cambodia was one of the last countries in Southeast Asia with an independent media. When I return, I’ll be leaving “a country moving backward, in a world that is moving backward,” as Jodie DeJonge, The Daily’s former editor-in-chief, described it.

“We are not the judge,” said Chhorn Chansy, The Daily’s former news editor, speaking of the role of journalists. “But we can be the voice of the people to the government, to the world.”

With The Daily gone, he added, “How will [the Cambodian] people decide about their lives if they do not even know what is happening in their own country?”