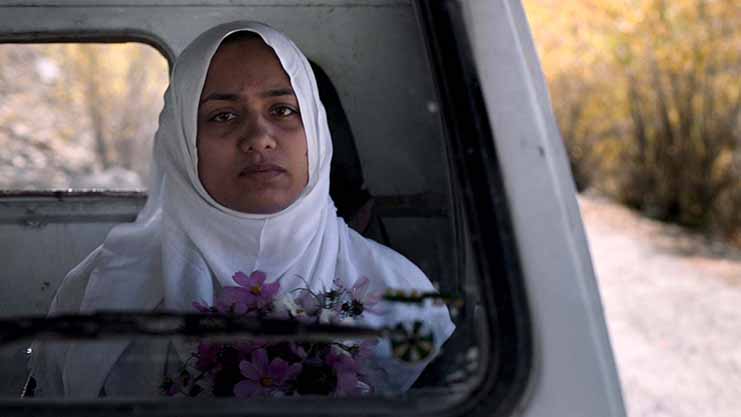 The story of a Kashmiri half-widow who seeks justice is the focus of Praveen Morchhale’s 2018 film. In the terminology of Kashmir, a half-widow is a person whose husband has been disappeared by the occupying Indian military.

The half-widow, Aasiya (played by Shilpi Marwaha), lives with her mute and paralyzed mother-in-law and a troubled teen daughter (Noorjahan Mohammad Younus). Aasiya seeks a death certificate for her husband who has been missing for over seven years from a corrupt government official ( Ajay Chourey). Aasiya’s life is in limbo—she cannot re-marry and she’s unsure if she wants to, and she needs the certificate to be able to inherit a third of an acre that her husband, an unemployed engineer had farmed for saffron. Aasiya gets by working as a nurse in a hospital in Pulwama and leaves her paralyzed mother-in-law bound to a chair when there is no one to care for her.

The opening scene where Aasiya lovingly ties the old woman to a chair is both poignant and symbolic of the helplessness of the women who are left to fend for themselves while the Indian army occupation destroys their lives.

This film was made before the 2019 abrogation of Article 370 of the Indian Constitution, which took away Kashmir’s autonomy and increased army occupation of the region. India and Pakistan have fought several wars over Kashmir since 1947. The most recent confrontation occurred in February 2019 when some Indian soldiers were killed by jihadis in Pulwama.

This film is set in Pulwama and in retrospect one sees how highly militarized the area is, thus making the 2019 attack almost inevitable.  The characters refer to Kashmir as both Jahannum and Jannat (hell and paradise) and the landscape in the film is bleak and filled with army checkpoints. A recurring scene is of a private taxi ferrying people in and out of the city and the vehicle is stopped each time so the army officer can check IDs and bags. In this repeated action, we see how both the army and the people fall into a routine and even build a friendship. The taxi driver proffers the army officer fresh fruit each time they go by because he feels sorry for the man living under difficult conditions.

In focusing on Aasiya and her struggles, the film shows the gendered impacts of the military occupation of Kashmir. Men disappear (sometimes as young as 14) and are never heard from again. The women search for them in jails, security centers and morgues and never get word about their men. The women grieve, seek justice from a repressive and bureaucratic government that buries them in paperwork. The corrupt government officials seeks bribes and sexual favors and the women trudge along in their daily lives. They also support one another to the best of their abilities. The film’s ironic conclusion is both stark and yet not wholly unexpected.

Although the struggles of the Kashmiris for autonomy date back to over seven decades, the issue has become prominent in the West only in recent times. This film adds to the conversation and its focus on the women is an important and necessary one. Powerful and understated at the same time, this film is one people should watch.