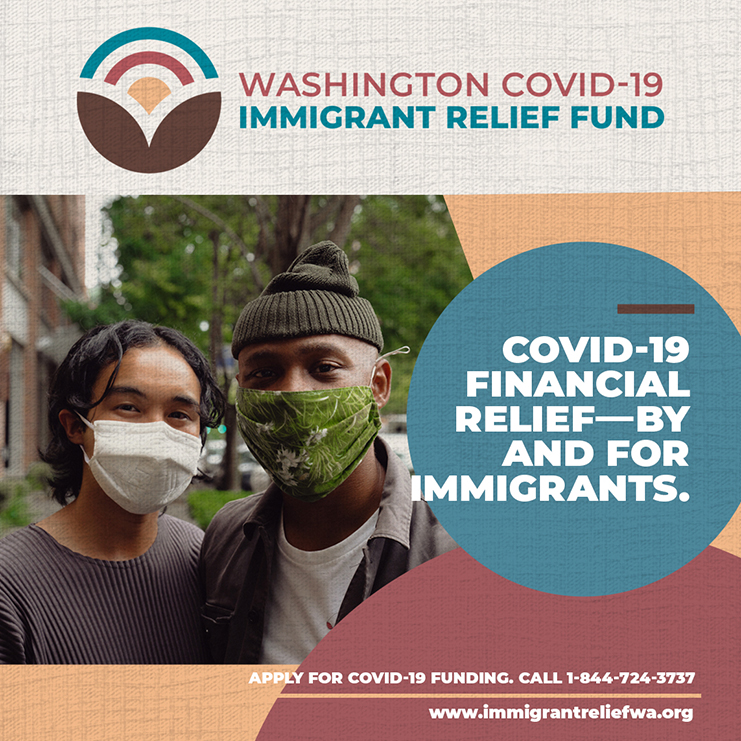 Washington immigrants who have been impacted by the COVID-19 pandemic and shut out of federal relief or state unemployment benefits can now apply for a one-time payment of $1,000, or up to $3,000 per household, through a $40 million dollar relief fund from the state.

The fund came about as a response to the immediate economic impacts of the COVID-19 pandemic on immigrants and refugees. It’s estimated there are 230,000 undocumented immigrants living in Washington, and they are more likely to work in industries affected by the pandemic, said Robin Engle, communications director with OneAmerica. Many undocumented immigrants lost their jobs and healthcare access, and had no access to federal relief or state unemployment, Engle said. “Black and Brown community members, indigenous folks, undocumented folks, are being hit by this virus so much harder because of underlying inequities and systemic racism.”

Washington is the second state to set up such a fund, said Engle. It was first announced by Gov. Jay Inslee in August. “We believe that this is a model that other states need to be following,” Engle said. “Our federal government is purposefully leaving people out, cruelly, from the relief that everyone needs during this pandemic.”

The $40 million comes from a portion of CARES Act funding for Washington state. It is less than $100 million the immigrant advocacy organizations originally asked for, and Engle said more is needed. “We see this as maybe almost a down payment.”

The organizations wanted to push Inslee to take action for undocumented immigrants beyond just rhetoric, Engle said. “Inslee has been a pro-immigrant governor,” said Engle. “But that doesn’t mean that this was easy to accomplish or happened automatically.”

Information from applicants will not be shared with ICE or the government. The fund will also be unaffected by the Trump administration’s Public Charge rule, that penalizes low-income immigrants and refugees seeking help.

OneAmerica and other organizations felt it was important for trusted community organizations to administer the fund, because they are connected with immigrant communities, and so that information isn’t stored by the state government, where ICE could get a hold of it.

During the pandemic, OneAmerica regularly heard from undocumented immigrants who forgotten, Engle said. “People feeling like no one was coming to help them, that they were singled out as undeserving of support.”

“We know a thousand dollars isn’t going to solve all their problems,” Engle continued. “But we hope that this is a way to give people the direct support they need.”

In addition to pushing for more funding, OneAmerica and others hope to create a permanent system whereby undocumented people can access unemployment. “Anyone in our community who loses their job should be able to have a safety net to fall back on.”

Seattle opened applications for its own separate COVID-19 Disaster Relief Fund for Immigrants this month, which is available until November 5.

Those eligible can apply for the fund at immigrantreliefwa.org. Applications are open from now until December 6. The application is available in multiple languages including Chinese, English, French, Garifuna, Hindi, Korean, Somali, Spanish, Swahili, Tagalog/Filipino, and Vietnamese.