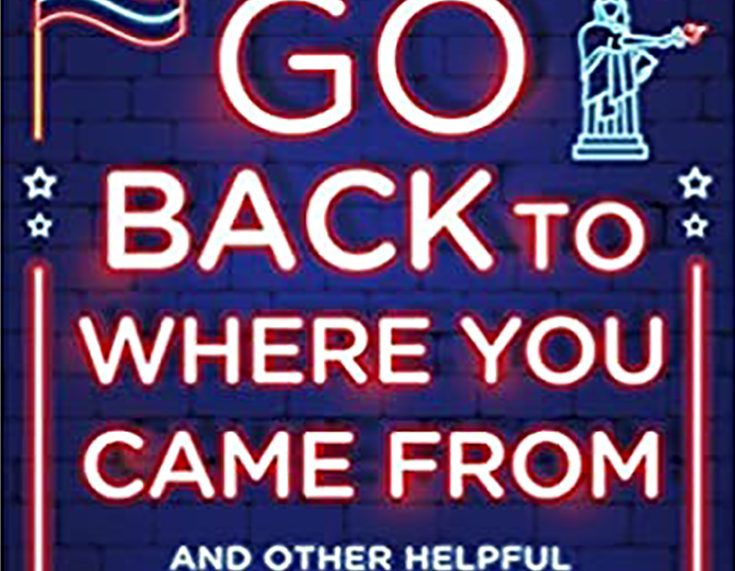 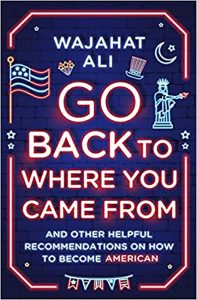 Anyone who has never been a target of racism in the U.S. of A. has lived a privileged life. For Census citizens (classed as Black or African American, American Indian or Alaska Native, Asian, Native Hawaiian or Other Pacific Islander or Some Other Race), prejudice, bigotry, xenophobia or hate is a ubiquitous fact of life. Go Back to Where You Came From is recovering attorney, motivational speaker, comic, political commentator, award-winning playwright and journalist, TV host, U.S. State Department consultant…and author Wajahat Ali’s account of the pervasive racism so insidious it has become an accepted, inescapable part of the American experience.

Ali writes, “With the resurgence of radicalized white power movements, many are now forced to confront the reality called white supremacy that the rest of us have had to deal with our entire lives.”

His parents, Pakistani Muslim immigrants, arrived in the U.S. in the1980s. Ali was born in Fremont, California, and spoke only Urdu until the age of five. He attended the University of California, Berkeley, making Dean’s List Honors, graduating with a B.A degree in English in 2002, and a law degree from USC, Davis in 2007. Following a mixed bag of diverse positions and occupations, he has become a familiar presence on political talk shows and social media, where his Twitter account tallies 280,000 followers to date.

“I never became a doctor or won the spelling bee much to the shame of South Asians,” he wrote, tongue-in-cheek, but he did produce an Emmy-nominated documentary film series, The Secret Life of Muslims, and was the lead author and researcher of “Fear Inc., Roots of the Islamophobia Network in America,” a seminal report of the Center for American Progress.

As American as baseball and chocolate hummus, the U.S. native has lived stateside for over 40 years. His exasperated response to racists’ rants “Go back to where you came from” is a vexed “Go back to where?” – aggravated by the knowledge that, “According to mainstream code, I will never be ‘ordinary’ or ‘a real American’.” Exhausted by the requirement to “explain, educate and at times defend my very being,” Ali concludes, “I am not content being the token diversity hire. . . or ‘that one Brown guy’” – a PC merit badge displayed for politically correct kudos of acknowledgement.

His book, like a torn scab, reveals the wound born by many, oozing pain for which there is no bandage that can conceal or heal, leaving a permanent scar – an aching reminder of agonizingly suppressed hurt.

Ali’s use of comedic irony highlights some of his profound observations. “I went to an all-boys Jesuit Catholic high school in the Bay area,” he recalls, “where I dominated the yearly religious studies classes to the point that Father Allender almost wept when reading out the highest grades in the class: Wajahat Ali, the Muslim, followed by Kalyan, the Hindu. I carpooled with Brian, a Jew; Guarav, a Hindu; and Allen, a Christian son of Nigerian immigrants. My America was a United Colors of Benetton ad” – a still life of evicted outsiders, yearning for insider status, with scant chance to penetrate well-fortified barriers.

The introduction to Ali’s book begins with a sampling of a half-dozen “fan mail” messages he received (replete with explicit name calling, uninhibited epithets and rampant denigrations), which he deftly dispatches, hurtling incisive retorts of his own in humor-wrapped congenial innuendos. This sets the tone and topics of the book’s basis.

Within the 10 chapters, totaling 258 pages, Ali’s first-person narrative is a memoir generated from his examination under the microscopic lens of personal experience, research, observations and data.

“According to the 2020 Hollywood Diversity Report,” he writes, “91 percent of studio heads are white and 82 percent are male. Similarly, among all senior executive positions, 93 percent are held by white people and 80 percent by men.”

He voices the unstated, but obvious question lurking about: Why? – and mocks the typical all-too-familiar platitudinal responses: “We looked everywhere and we just couldn’t find anyone” and “Well, it’s just a meritocracy where anyone can make it if they work hard.” Blah. Blah. Blah.

Ali recalls, after passing the California bar exam, the difficulties he encountered in his attempt to become a lawyer. “I spent hours every day writing cover letters and submitting my resumé to literally any legal job in the Bay Area and was greeted with rejections from attorneys who were impressed . . . (who) urged me to instead pursue a writing career.” Somber examples follow as he explores experiences and relationships in a love-hate world rife with conflicting contradictions, yielding one provocative paradox after another.

The book’s final chapter, “Invest in Hope, But Tie Your Camel First”, concludes on a cautious upbeat note. As he casts a discerning eye on the insanity that is America, where “Everyone has to be a little bit mad to live here,” the author concedes, “It’s hard not to be smitten with a country that has a giant statue of Lady Liberty holding a torch welcoming immigrants with the words of a Jewish poet, Emma Lazarus, tattooed at her feet. . . . How can you not be romantic about America when you find out (she) was . . . modeled after a Muslim woman dressed in traditional Egyptian dress. . .?” While one might presuppose that the book is at most a negative rant, au contraire, it is balanced with positive observations, genuinely appreciative regard, and astute insights regarding this sweet land of liberty.

As much as the author finds blatant wrongs with this country, he notes that no other options aside from “hope” is available. An investment in “hope” is the solution: hope that change can and will happen.The alternatives – “cynicism and apathy” – are untenable. “The challenge for America,” he concludes, “is whether or not (the country) will live up to its narrative of being a sanctuary, a haven for all, a place where anyone can come and achieve success and freedoms.”

His thesis? There are two Americas – one for whites, the other for non-whites (often branded as immigrants). In a nation where everyone is (with the possible exception of Native Americans) an immigrant or descendant of past migrants, there is a certain irony wherein one group challenges others regarding their freedoms and rights.

Go Back to Where You Came From is Ali’s primal scream – a penetrating, often searing insight regarding American life, a discourse wrought with humor and passion that rubs communal noses into unpleasant places too often ignored or disregarded, where turning a blind eye or deaf ear to what has become de rigueur, tolerated and presumed.

Wajahat Ali’s book is a full-on spoof of life in the U.S.A. which would leave you laughing, if not for persistent pain filled encounters confronting racial and ethnic groups in today’s society. Go Back is a read that some will find annoying and fallacious, others a candid, authentic voice. Whatever one’s impression, given an open mind, Ali provides readers with much to contemplate.