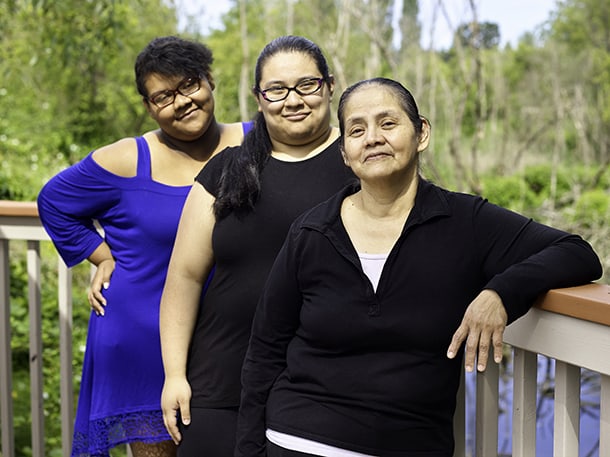 Words tumble from Maria Rosa Garcia Felix, a careworn 53-year-old immigrant from Mexico. She shares information about her health, her pending divorce and how much others enjoy her cooking—including recent praise from a Cordon Bleu-trained coworker. She also describes heartbreaking circumstances that expose the numbing power of domestic abuse and Maria’s abuser, and how the promise of a green card was used against her.

Maria came to the United States 22 years ago following her first husband. She had little money to secure a new life after paying a guide to see her across the border.

“I had only 50 pesos in my pocket and I spent 20 on tostadas,” she said of the meal she ate in Tijuana before crossing into the United States.

That marriage ended and Maria married a second time. Reliant on her second husband to sponsor her immigration, Maria was left vulnerable to his cruelty, manipulation and violence.

“In 2012, he tried to kill me. I got into the car and drove crazy on 405. My friend said, ‘Go to the police’ and I went there. The police took photos of my bruises,” she said. “I picked up some of my belongings and went to a shelter. They helped us. Otherwise, I didn’t think we could make it.”

Offering an example of their life together, Maria said, “In the living room, I would sleep on the floor covered with a blanket.”

Maria secretly applied for a green card as the victim of domestic violence—giving her the power to seek emancipation from her husband. Not long after moving out on her own, Maria slipped and fell, suffering a broken leg that went undiagnosed for two months. Her pastor led her to a health worker, who got her enrolled in a Swedish Hospital program that gave her health care and benefits.

Maria is diabetic, walks with pain and a limp from the old leg injury, and has a small family reliant upon the low-paying work she obtains from an employment agency. Often she does cafeteria work. There Maria can show off her culinary skills.

“Insulin is expensive, it costs $2,000,” she said. “I need to switch to insulin but I’m not able to pay for it so the doctor left me on Metformin.”

One of Maria’s two pastors passed away. The health advocate from Swedish left, moving onto another position. These small breaks offer insight into how little it takes to derail someone like Maria. The cost of a phone bill can be a barrier to following up on appointments. Unreliable transportation means not getting somewhere. In this case, the exit of people who had made it their commitment to look out for her was all it took to set Maria adrift.

“When my case manager left I was out of medication,” she said. “I hadn’t seen a doctor in months.”

Earning just $420 a month plus $357 in food stamps, Maria meets the income criteria for Medicaid, but she must hold a green card for five years before she is eligible. She does not yet meet that requirement. Because the Swedish program she was enrolled in expired mid-year, she missed open enrollment under the Affordable Care Act, leaving her in a health care limbo. The result was nearly fatal.

Maria’s situation appeared dire until she met Sharissa Tjok, International Community Health Services (ICHS) outreach and enrollment coordinator. Sharissa, a fresh-looking Chinese-American woman, is soft-spoken and gentle. Under the softness however, is a steel mind and expert knowledge of the state and federal public health care systems.

“She is seeing the doctor and getting medication now,” said Sharissa. “ICHS will make sure she is covered under our sliding fee program until she is able to enroll in a qualified health plan.”

Sharissa’s entire focus is helping patients—many of whom don’t speak English, nearly all of whom feel a bit lost—understand their health insurance eligibility and options, and how and when to apply. “Immigrants really struggle with life,” she explains. “They have to pay bills. It’s hard to find a job. When they do find a job they usually don’t have health insurance,” she said. “My team is good and we have a mission to help as many people as we can.”

She admits to frustration with the attempts to repeal the Affordable Care Act and the possibility of large numbers of ICHS patients losing the benefits of the ACA, and especially Medicaid, just as cumulative gains are coming into place.

“I see losing all my effort over the past three years,” Sharissa said. “Fewer people would have preventative health care and they would only see the doctor when they really need to. They would try to cut costs. They would skip medications.”

Maria only sees the lifeline in front of her.

“God has something for me. I know after the rain the sun will come out” she said. “There’s nothing you can do except keep going. I have two daughters and they need me. They need an education. They need a better life.”

Maria’s parents owned a restaurant when she was a child and that’s where she learned to cook with such skill. She’s passing that legacy onto her daughters. Nineteen and 15 years old, they live with her in Kirkland, the oldest attending Cascadia College in Bothell, the youngest a student at Juanita High School.

“Now my girls cook for me,” she said with pride.