He was 83, and passed on after leading an inspiring life full of family, vision and hard-earned accomplishment as founder, longtime owner and operator of Kau Kau Restaurant (1959-1986), Kau Kau BBQ Market & Restaurant (1974-2003) and Korea Ginseng Center (1976-1998). While running three businesses and carving an institution for Chinese BBQ in the Pacific Northwest, he continued to keep building his dreams to benefit his community.

Wai brought new life to Chinatown-International District by spearheading new developments. In 1978 at the age of 49, Wai bought an old building, the former Leyte Hotel on Jackson Street. He would renovate the building into a mixed-use retail and 14-unit apartment building which he would rename the Far East Building, earning him wide recognition as a pioneer in neighborhood revitalization from the city and local Chinese community.

A man ahead of his time, Wai was “always able to achieve his vision and his dreams. He always talked about what was missing, what he could build,” remembers surviving son-in-law Richard Chang, current owner of Kau Kau Restaurant with Wai’s daughter Lynn Eng Chang. “He always thought about the community first.”

Above all, he was a family man.

He held pride in his family name and built it in his neighborhood.

In 1985, Wai fulfilled a lifelong dream of housing an Ancestral Hall for the Eng Family Association in its own building. He built this from the ground up, from the purchase of the land, to the development and construction of the building — now called the Eng Suey Sun Plaza. Along with the Ancestral Hall, it would include commercial office and retail spaces that would earn income for the family association.

“I think he would be most proud of starting from nothing, working hard and building his business,” says Lynn.

Wai was born the second son of Kai Gong Eng and York Fong Lee on the Chinese Lunar New Year date of August 28, 1929 in Toison, Guangdong, China, and immigrated to the U.S. in 1937 with his grandfather and brother Robert. A year later, Wai’s grandfather returned to China with his grandsons so they could receive a proper Chinese education.

In 1939, when World War II broke out, leaving China was impossible, and his family suffered extreme hardship nearly starving to death through these years. By 1946 after WWII ended, Wai returned to Seattle at 17 to reunite with his father, who had already been working in the states at a popular nightclub in Seattle called the China Pheasant. Since his father worked too many long hours, it was difficult for him to care for his son, so he asked his good friends Edward and Josephine Clifford to ensure Wai was cared for.

They warmly took Wai in, and Wai became a popular student at Highline High School, despite the fact that he could not yet very well speak English. He was even elected Junior class president.

By 1951, at age 22, he was drafted and served in the Korean War, and returned to Seattle at 24 to enroll in college. With some assistance from the GI Bill, and working full-time to cover room, board and books, Wai was able to attend Seattle University and University of Washington, but was forced to quit before graduating when no more funds from the GI Bill were available. In 1953, he met the love of his life and wife Sandra Chinn, and they married the following year.

His life of accomplishment was blessed with a lifelong partnership and marriage with Sandra, two children, Clifford and Lynn, a son-in-law Richard and two grandchildren, Justin (who was called “Little Wai” for his great resemblance to his grandfather) and granddaughter Kianna. All but Sandra, who passed away in April 2011 survive him and continue to build the next generation of his legacy.

Wai will be sorely missed and remembered for his strong leadership, intelligence, vision, wit, charm, generosity, wisdom, work ethic, strong will, and love of Chinese literature, poetry and arts.

This obituary is brought to you by Wai C. Eng’s family, with additional reporting by Christina Twu. 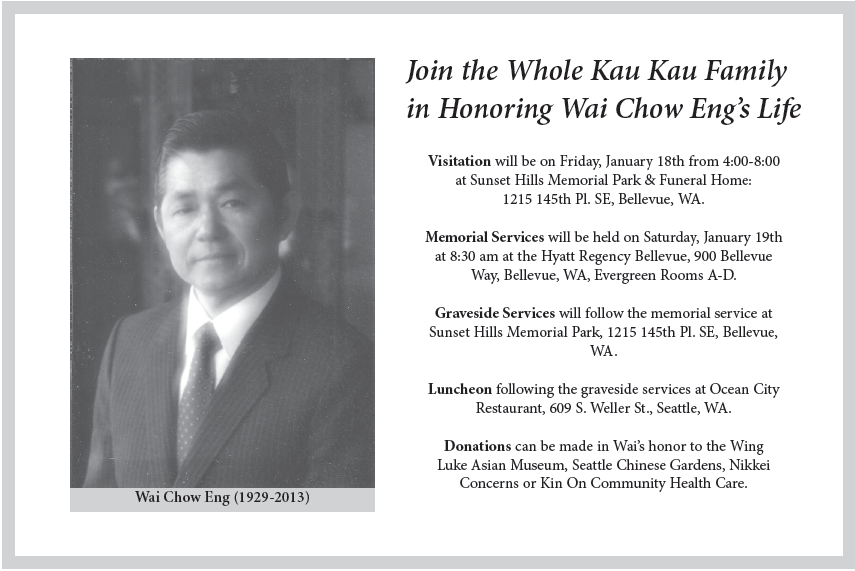