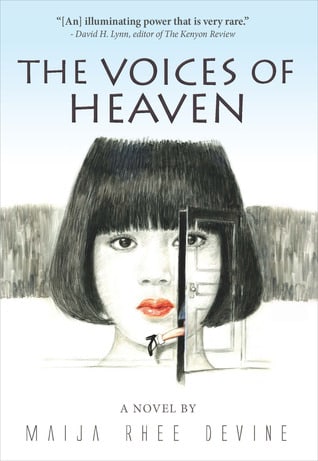 Maija Rhee Devine’s novel, The Voices of Heaven, was initially an autobiography set in Korea that then became a novel that she worked on for 10 years, on the advice of her agent. Not having read her original text, I’m not privy to what has been lost in that process of transformation, but it does make me curious about the potential of a personal perspective that is absent in the omniscient narration of the novel’s finished product. That said, there is a distinctive quality in her work that will draw readers who are unfamiliar with the modern, disruptive history of Korea and entrenched values of Confucianism that continue to shape family norms.

In her debut novel, Devine presents a stark backdrop of postcolonial Korea through a chaotic civil war, and ends in contemporary time. Told in third-person through multiple characters, many of them female, the book takes us through the lives of a working-class family struggling during and after the Korean war, letting us into the private worlds of two dutiful Korean women, Eum-chun the first wife and Soo-young the younger mistress, who must both compete for the affection of their husband, Gui-yong who delivers goods by truck.

Also embedded in the plot is a secret adoption of the 8-year-old girl, Mi-Na, who is unaware of the circumstances surrounding her origin, although she is teased plenty throughout the book by the neighborhood kids as a “changeling”; soon enough, she’ll realize that her worth as a girl and daughter is “as good as wet straw shoes,” and that only a son is considered to bring stability and legitimacy to a proper, Korean family as a male heir.

Without ambiguity, Devine portrays the fate of women as inferior in postcolonial Korea, particularly the contrasting roles of Eum-chun and Soo-young, as overshadowed by a strong cultural cloud of han. Similar to the Freudian version of melancholia, han is best described as a national sentiment of unending sorrow caused by successive periods of colonization, war, and imperialism in Korea.

Certainly in the domestic sphere, a place where tensions between who is valued and who is secondary happens daily between the two women, larger irresolvable battles are also taking place outside their home, between the Communist guerillas hiding in mountainsides and the South Korean government and U.S. troops. But, other than intertwined references of gossip and rumors, the book doesn’t focus on the political details of the war—it serves mainly as the catalyst for the separation of Mi-Na’s family during its outbreak.

One of the memorable scenes in the book comes unexpectedly when Eum-chun and Soo-young have a moment of carefree playfulness, like teenage sisters, setting aside the chore of ironing sheets to drum mallets instead to make an impromptu song, and sneak puffs from their mother-in-law’s tobacco pipe, which is forbidden for young women to smoke.

As Eum-chun remarks, “If two people get along, their mallets make music,” mistress Soo-young is able to follow along with the rhythm temporarily, although their union is usually one of forced equanimity.

Soon enough, Soon-young’s pregnancy with the first son in the family will cause an intense storm of insecurity and jealousy in Eum-chun, who is unable to have biological children of her own. Yet, even though Soo-young’s fertility will bond her more fully with husband Gui-young, her role still remains second to Eum-chun, best summed up in her own mother’s words about her demoted social status as an unmarried so-shil: “You became a boiled pig, and I did, too, that day your groom cast you out” (7).

And to make matters even more tragic, the reason why Soo-young’s groom jilted her was over a small physical defect on her leg, yet another reminder that we are immersed in the world of patriarchal norms where arranged marriages are set up between adolescents according to social class, and women of no social standing become kept as child-bearers.

As mentioned earlier, the strength of this book is in the subtle way it uncovers the voices of female subjects who remain resourceful and fierce survivors despite the harrowing conditions. Mi-Na will fulfill her mother’s dream of her becoming the first college-educated girl in the family, and go on to become a professor in the United States, yet her side of the story is less prioritized in the novel. In particular, I wanted to know more about Mi-Na’s secret adoption, which was portrayed as such an extreme taboo that her mother feared that revealing the truth would cause her to become hopeless and perhaps even suicidal, since bloodlines determine every aspect of a person’s identity from status to education to reputation. What remains fascinating are submerged as gaps, and perhaps will emerge in another narrative in the future.