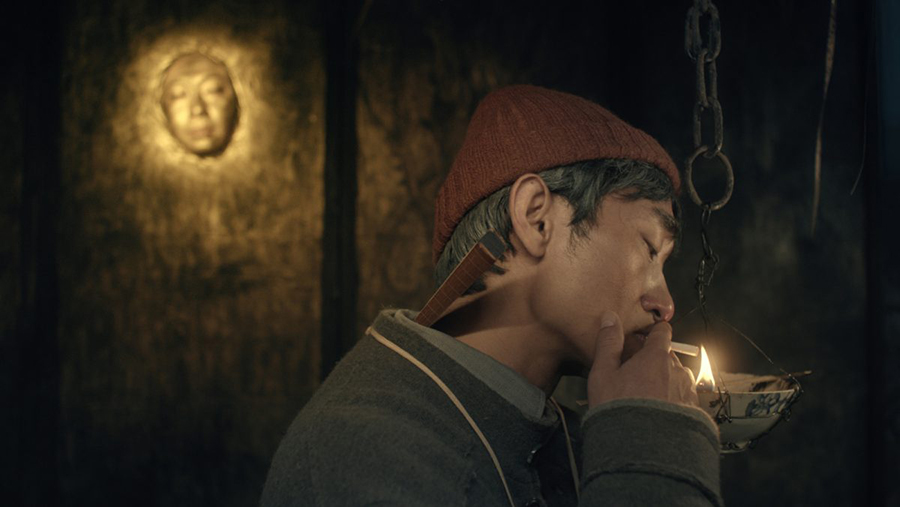 A New Old Play is a visually stunning collection of set pieces, miniatures, blocking, and stage effects, which guides the audience through a changing China, from the Republic period to the Cultural Revolution. In Chinese director Qiu Jiongjiong’s 2021 opera-turned-film, the story begins at the end of a man’s life. A New Old Play follows the life of Qiu Yi, a famous actor and “clown,” who, after his death, reminisces about his life in the Sichuan opera. While in purgatory, he is accompanied by Horse-Face and Ox-Head, two deities who are guardians of the underworld in Chinese mythology, escorts of the newly deceased.

When Qiu is just a boy, he is found squatting amongst the performers of the “New-New” troupe. A nationalist army theater troupe, the actors travel among the soldiers to entertain them. The troupe was started by a man named Pocky, a nationalist soldier with a penchant for Chinese opera, and who was allowed to create his own ensemble as a reward for his bravery against the Japanese. When little Qiu is found out, he leans into the rumors about his actor father, and declares that he too wants to learn opera, so that he can earn his keep. Pocky decides to take him under his wing and teach him the ways of the theater. Before long, Qiu becomes a star student.

By the time young Qiu reaches adulthood, he has risen through the ranks and is now a renowned actor in the New-New theater. In the backdrop of his success, however, is growing political turmoil. Pocky is made a commander for the suppression of the communists during the Second Sino-Japanese war, which puts the troupe and their army on the losing side of the civil war that follows.

In spite of being in a nationalist theater troupe, the performers don’t seem to display any particular loyalties. They are actors, ready to perform any role assigned to them, ready to recite any line. Qiu is now married to another actor, a woman who was stage-famous from the age of eight. His wife is even more ambivalent about the war. As they smoke opium together, she begins to reminisce about her early days in the theater. She complains about being gawked at and harassed while growing up in the theater, and divulges one particular memory of how some nationalist soldiers chased and shot her in the leg after a performance. Her words are almost prophetic. As the nationalist soldiers lose ground, they take out their rage on the actors. Faced with this misery, many of the performers turn to the pipe and become mercilessly addicted to opium.

After the communists win, the New-New troupe is reunited once again in Sichuan to perform under a new regime. By now, many troupe members have families of their own. At first, things are peaceful. The actors are fed and treated well. Gone are the days of beatings and harassment, and many of the performers have kicked their opium habit. But this, too, is momentary, as the country is plunged into famine, and then the tumultuous Cultural Revolution. With the advent of this new era, these people must learn how to perform, adapt, and survive.

Seeing this film in the United States, with the current political climate between the two countries, it can be hard not to impose a western lens on the film. A user on the Chinese social media platform Douban said of the film, “In China, you can’t see it. Outside of China, you can’t understand it.” In 2021, A New Old Play premiered in Switzerland and won the Grand Jury Prize at the Locarno International Film Festival. The film is still making the rounds in the international film festival circuit, but has not yet been made available for a general Chinese audience, though it has been well received on Douban.

Qiu Jiongjiong is a highly regarded artist and filmmaker in his home country, with many awards and exhibitions since 2008. A painter by trade, much of this film is shot like a tableaux, with the camera placed squarely in the middle of the scene. American viewers might liken the flat and staged look to a Wes Anderson film. However, Qiu Joingjoing’s influence is not the film stylizations from the west, but rather his own unique background as a painter, as well as a grandfather who was a prominent opera performer. Every backdrop is handmade and painted, tinged with the dark fantasy of Sichuan opera. Even the main character is based on his grandfather’s story. Qiu Jiongjiong’s masterpiece is a striking internal dialogue about the past and future for China. It discusses China’s hardships and unglamorous history with frankness and even a touch of whimsy. The fate of being a clown is destined to face the rise and fall again and again in the continued tumult of time.