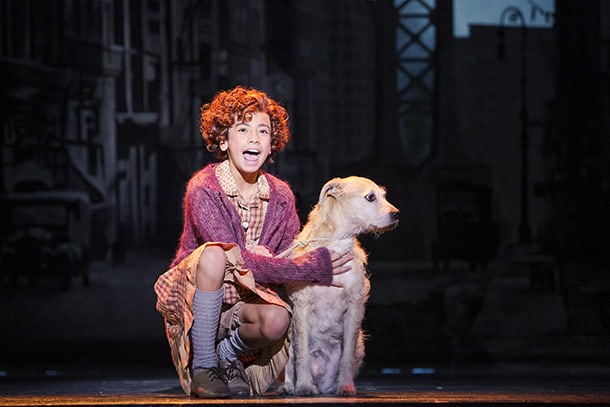 Young actor Visesia Fakatoufifita is having a great time playing the eponymous role of Annie at The 5th Avenue Theatre.

Eleven-year-old Fakatoufifita is temporarily being home-schooled in order to accommodate her rehearsal and performance schedule, but she says it’s worth it because her fellow castmembers are so fun. “I get along with Faith Young (the other actor playing Annie) very well!” she said. “And I have to tell you we had the best times carpooling. We would listen and sing to music in the car even on long nights after rehearsal.”

She has fond words for the other performers, as well. “The Orphans, they have brought me so much joy working with them,” she said. “They are funny, sweet, kind, and so talented. The orphans have put as much work as I have put into Annie.”

Fakatoufifita especially appreciates Timothy McCuen Piggee, who plays the role of Daddy Warbucks. “Whenever we are on stage together I feel like there is a special bond between us!” she said. “It has been such an honor working with him and I hope I will get to work with him again soon.”

At her young age, Fakatoufifita already has years of training and experience.

“When I was little I always used to sing songs on my fake microphone,” she said, “and my mom thought I would be interested in singing so she got me into voice lessons and then I got into theater.”

Besides Annie, one of her other favorite performing experiences has been to be part of Fagin’s gang in Oliver! The Musical at ManeStage Theatre Company in Sumner. “It was so cool being a boy and the people that I worked with were absolutely amazing,” she said. “I loved dancing until I had sweat across my face.”

But pursuing her dream of stage performance isn’t always easy. “This opportunity has been great, but there are some things that you have to give up to let these things happen,” Fakatoufifita said. “I had to give up several sports from school.”

Academics have also been challenging. “It has been pretty hard learning math without being there with my teachers and classmates, but I learned to compromise by emailing my teacher back and forth,” she said. “With her help, it makes it easier to learn my math.”

Regardless, Fakatoufifita has found Annie a very worthwhile pursuit. “There is so much more to her than a red-headed kid who is on a journey to find her parents,” she said. “I think that’s because Billie (the director) taught me and Faith Young the behind story of Annie, because there is more of a difference between acting like the character and being the character.”

She has learned how to engage in this deeper exploration of Annie as a person. “You can’t just look at the words in the script, you have to look inside of her,” Fakatoufifita said. “You have to look at every detail in your character.”

Once Annie is finished and the year is over, Fakatoufifita is looking forward to future acting projects. “One of my dream roles that I would like to play in the future is Ti Moune in the Broadway musical Once On This Island,” she said. “She is selfless and she is wild. She is very loose and free, and I feel like I am much like her.”

But in general, Fakatoufifita just hopes to continue performing. “One of my dreams is to go to New York City and be on Broadway,” she said. “I love theatre and hope that I can do it for the rest of my life.”