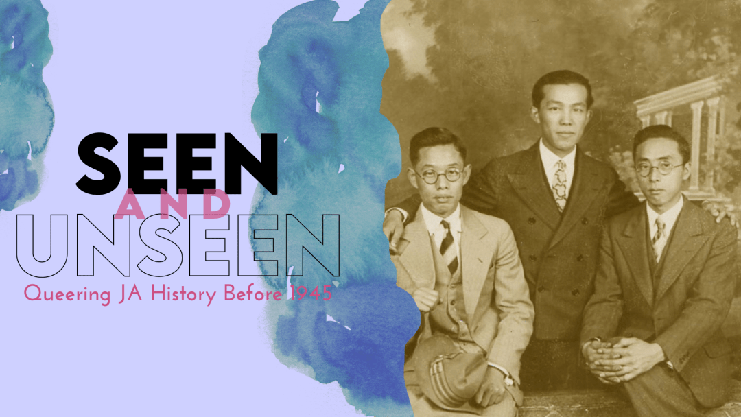 Seen and Unseen: Queering Japanese American History Before 1945 is a virtual exhibit that explores the relatively hidden history of queer life in Japanese American history. It is curated by writer Stan Yogi, who wrote “Where There’s a Fight: How Runaway Slaves, Suffragists, Immigrants, Strikers, and Poets Shaped Civil Liberties in California” and “Fred Korematsu Speaks Up”, and University of San Francisco dean of the College of Ethnic Studies Amy Sueyoshi, writer of “Queer Compulsions: Race, Nation, and Sexuality in the Intimate Life of Yone Noguchi.”

The five-part presentation is organized chronologically to start with attitudes and beliefs in Japan toward same-sex activities before the “opening” of that country to western influences. Hardly taboo, gay practices were accepted as a facet of social life, even celebrated in depictions of “nanshoku” (male/male) relationships and in “yakusha” (female impersonation).

The earliest immigrants from Japan brought this tolerance with them when settling in the U.S. as the exhibit shows, and stories about persons who deviated from standard male/female relationships regularly made it into newspapers and literature. The most prominent story is that of Yone Noguchi. Now remembered primarily for being the father of Isamu Noguchi, the great artist and sculptor, Yone led a colorful, adventure-filled life. Handsome and personable, he came to the U.S. intending to become a poet and man of letters. He formed a relationship with Charles Warren Stoddard, 40 years his senior, a man of wealth and connections and who carried on with several younger men. Yone also connected with women, eventually having an affair with Leonie Gilmour, and this relationship produced Isamu. It would appear that the Issei generation took these stories in stride without great disapproval.

In the 1920s and 30s, the community began a shift toward conforming to American society’s harder attitudes toward any form of what was considered sexual deviancy, probably reflecting Christian values of “normal” behavior. Signs of any gay life became sparse, so research into these subjects has been difficult. After Japanese Americans were incarcerated during WWII, evidence about such lives almost disappears.

Yogi spoke to me about his loneliness and isolation growing up in Los Angeles as a gay person. He never met any Nisei or Japanese who identified as homosexual and he said he felt his life was on two tracks that never intersected. Only lately has he met others who had the same experiences, and now, he is very active in Okaeri, an organization of Japanese American LBGTQ identified persons founded in 2014. Okaeri has served as a “home”, a meeting place where people could socialize and also tell their stories.

Today, with landmark decisions allowing for gay marriage, and relative acceptance of LBGTQ issues in the U.S., the taboos are falling away. A show like Seen and Unseen brings parts of our community out of the shadows and celebrates our diversity openly. These are steps to recognizing those in our community who have had to struggle with hostility, rejection and denial. Social support for this project is wide ranging, judging from the many churches, Buddhist temples, community organizations and other social groups number of sponsors for this exhibit, signaling widespread acceptance of all who identify as being LBGTQ.

This show will be available on-line through February 14, 2021 at https://seenandunseen.net. In addition, J-Sei is hosting a series of free online programs via Zoom. Tina Takemoto will speak on her films on queer Japanese Americans incarcerated during World War II in “Queer Cinematic Visions of Nikkei History”, on Dec. 1 at 7:00 PM. Registration for these talks are through J-Sei, at https://j-sei.org/seen-and-unseen/.