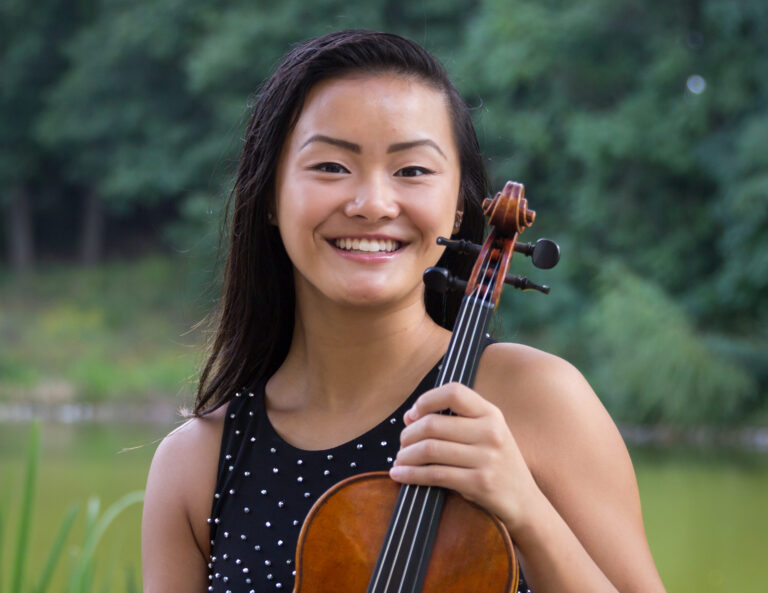 Two-decade-long circus and dinner show Teatro ZinZanni took a hiatus from Seattle stages during the recent Covid-19 pandemic, but is now back with a new show called Coming Home.  An integral part of the show is a live band, and violinist Anna Nordmoe is a prominent part of that musical ensemble.

The current show is a celebration of Teatro ZinZanni’s Seattle roots, having been founded here in 1998, and then producing over 100 shows across the nation featuring dozens of artists from all around the world.  Coming Home brings artists from all around Europe and the U.S. back to south Seattle, transforming an industrial warehouse into an intimate circus evening with a four-course dinner by Herban Feast, along with all the drinks you could wish for.

Keeping the beat for this 150-minute event is the six-piece band, led by composer and music director Hans Teuber.  Alongside violinist Nordmoe are four other musicians:  Marina Albero on piano, Jerome Smith on trombone and tuba, Keith Lowe on bass, and Jacque Willis on drums.

Nordmoe was thrilled to be asked to be a part of Teatro ZinZanni’s show Coming Home in Seattle.  “Teatro ZinZanni is a perfect combination of the two things I love most dearly: music and circus!” she beamed.  “The Coming Home show resonates with me because as a performer, we have just come out of a traumatic and trying time, where all live performance was at a stand-still.”

During the Covid-19 pandemic, Nordmoe wondered if live theatre would ever return.  “Thanks to science, we are again able to perform and feel the energy of a live audience!” she said.  “I don’t take any show for granted after the last three years.”

Even the rehearsal process has been a pleasure for Nordmoe.  “There are people who are in our show who have been part of Teatro ZinZanni for longer than I have been alive, so I loved getting to learn from them and work with true seasoned professionals,” she relayed.  “Everyone has been so friendly, warm, and welcoming, that I have felt nothing but supported and included as soon as I started.”

Nordmoe began studying the violin before she can even remember, reportedly at age two-and-a-half.  “I started violin in the Suzuki method and for the first several years, I attended a weekly group violin class on Saturday mornings,” she recalled. “I remember my mom or dad would drive me to the class and it was a fun opportunity to see all my friends.”

The class played publicly as well.  “Every month, there would be violin recitals that we would all have to play in, which got me really comfortable playing in front of people and performing at a very early age,” Nordmoe said. “I enjoyed performing, especially with my friends on stage with me, and it was fun to feel a sense of accomplishment after every performance.”

Watching others perform also inspired Nordmoe.  “My dad took me to see Sarah Chang play when I was six,” she recounted.  “I remember being so ecstatic to see her play, and even though I was too young, and not advanced enough on violin, to fully appreciate what I was seeing, I recall being very taken by the pretty, sparkly dress that she was wearing and wanting to someday be a performer like her so that I could also dress up and perform for people.”

She credits her parents with her ultimate satisfaction as a violinist.  “When I was young, I was extremely resistant to practicing, and my mom and I would fight about it constantly, but it turns out that violin is the one true love of my life and without her perseverance, there are so many amazing opportunities and life experiences I would have missed out on,” Nordmoe said. “My dad deserves a lot of credit too, as he was the one driving me hours and hours every weekend for lessons when I was in high school.”

Nordmoe now has twenty years of training under her belt.  “One of the biggest things I have learned is how to be self-motivated,” she said.  “I learned how to work hard, how to set goals for myself, and how to make plans to achieve those goals.”

As Nordmoe learned in graduate school, consistency is key.  “At the risk of sounding extreme, every artist is only as good as their worst performance,” she asserted. “I learned how to build bullet-proof methods of practice so that my playing is at a consistent level, no matter what the condition.”

But balance is also important for Nordmoe.  “Because music becomes such a core part of a musician’s identity, and considering the fact that most musicians start at a very early age like I did, it is common for the lines to be blurred,” she admitted, “and as a result, for artists to experience burnout or eventually feel resentment towards their craft.”

One way that Nordmoe puts her time as a musician in perspective is by spending time in the air – literally, as an aerialist. “I did classical ballet pretty seriously for about fourteen years before going to college and for a while, I was considering whether I wanted to pursue dance instead of violin,” she said.  “During my junior year of college, I was able to find time to try aerial acrobatics, which seemed dance-adjacent.”

Now, she’s hooked.  “After trying it and seeing a tiny glimpse of the circus world, I became obsessed and felt that it was a good way of expressing myself in a different artistic medium than violin or dance,” she said.

Nordmoe believes that these two efforts complement each other.  “The most impactful thing I learned from my aerial training that directly applies to violin performing is how important trusting your training and practice is,” she said. “In moments of high stress and pressure, it is crucial to trust all the work you have put in leading up to that moment and let your body do what it knows how to do.”

She reports feeling more, not less, energized by the dual focus.  “The more things I have on my plate at a time, the better I become at compartmentalizing them and getting really efficient with my time,” she said.  “Getting a good amount of sleep every night is really important to be a functional human being.”

These two talents also complement each other on stage in Coming Home.  “When the idea first popped into my mind, I was able to track down the only other person, that I know of, in the world who also plays violin and does aerial acrobatics at the same time, Janice Martin,” Nordmoe shared.  “I am also grateful for Norm and Tobias, our amazing TZ directors, who trusted me and allowed me the platform to put these two skills together.”

For Coming Home, Nordmoe will be performing about one hundred shows, and plans to bring all of her competencies to each one.  “As a performer, I want to be able to give everyone who comes to see us an incredible show,” she said.  “Learning how to get my playing to a consistent place is really what allows me to perform at my best every single night.”

After Coming Home closes, Nordmoe will return to New York City to perform on Broadway.  “I am so excited for what the future holds,” she enthused, “and hope that there are more opportunities in the future for me to combine my violin playing with aerial work.”