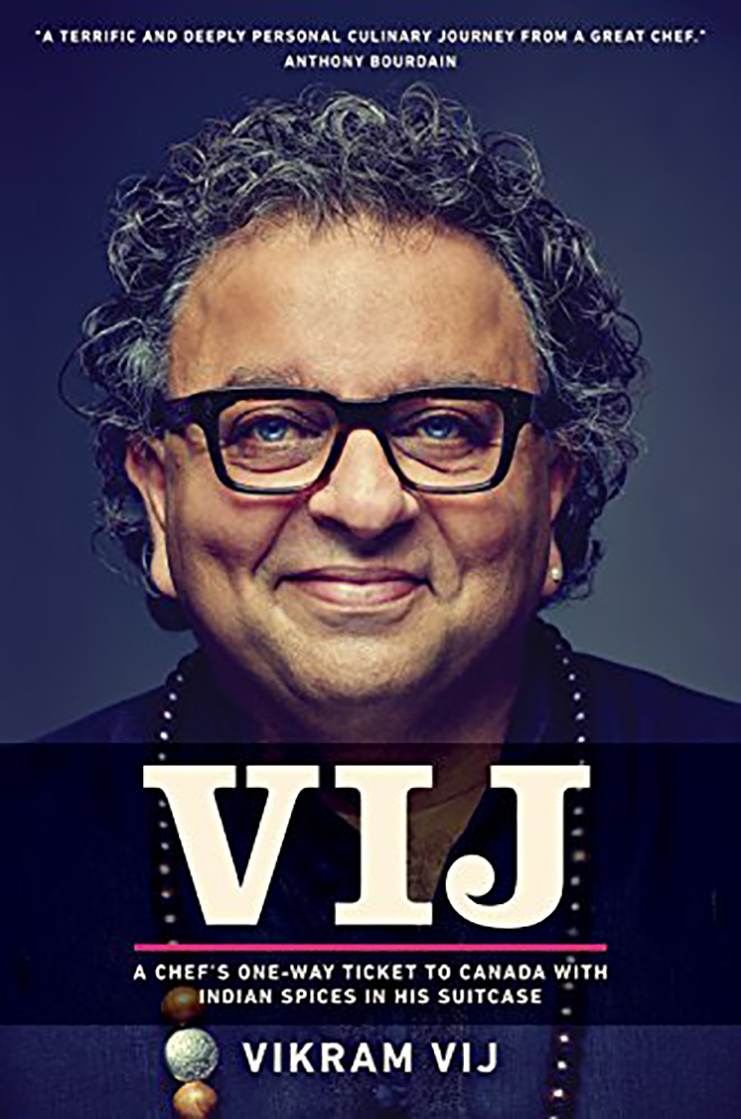 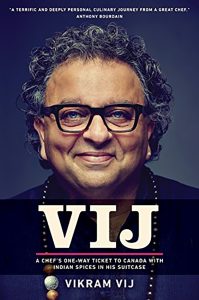 Indian born Canadian Vikram Vij is one of Canada’s most celebrated chefs. In 2015, he reached his Five by Fifty lifelong goal of launching five major businesses by the age of 50. His book, Vij: A Chef’s One-Way Ticket to Canada with Indian Spices in His Suitcase, is the story of how an Indian boy with blue eyes (“as rare as being a white tiger”) achieved this feat which, in the process, nearly bankrupted him and his family.

A highly readable, surprisingly engrossing biography, the book takes you from his childhood in India to his migration from Mumbai (Bombay) at age 19 to study hotel management in Austria. Speaking only Hindi and broken English, he arrived at the university which had prepared a special dinner of beef tongue for its new students. Recalls Vij, “For an Indian boy who’d never even eaten cow – a sacred animal back home – this was going to be a struggle… To this day, the thought of the dish makes me shiver involuntarily.”

After working for two years as a chef-in-training at the Michelin-starred Post-Stuben restaurant in Lech, a chance opportunity became his ticket to Canada. The visiting general manager of the Banff Springs Hotel in Alberta requested the kitchen to serve “something a bit spicy” and Vij was chosen to prepare it. “I rushed upstairs to grab the bag of spices I’d tucked into my luggage back in India,” he wrote. “All I knew was that (he) was among the world’s greatest hoteliers. And that I was nervous as hell.” Vij prepared a goulash: a fusion of Hungarian and Indian flavors. So taken by the dish, the general manager immediately offered him a job. “Come to Canada,” he said. “We need guys like you.”

In Alberta, states Vij, “I was charming and tireless, and worked doggedly to develop professional bonds that would ensure my rise.” Three months after his arrival Vij was named the star employee of the month. “My ambition was no joke. I was deeply focused on moving up.” By age 26 (just six years out of India) he became the general manager at the Banf Springs Golf Course.

The book, with its twists and turns of events – the struggles through his marriage, divorce, business ventures – is an absorbing, often inspiring, tale of one man’s journey to a hard-won success. With its large print and black-and-white photos, it’s a quick, easy, entertaining read. Beginning with a page of Vij-isms, for example, “If you’re going to fail, then fail loudly.” And “Cooking should be like sex – slightly different each time.” It ends with an epilogue – Eight Key Lessons I learned in Life – prescribing advice like, “Results are all that matter”, “Embrace Simplicity” and “Be Yourself”.

For those who are put off by the No Reservations policy of some restaurants, an entire chapter is devoted to his philosophy for adhering to this principal. Whether or not you buy his reasons, you ought to buy his book.